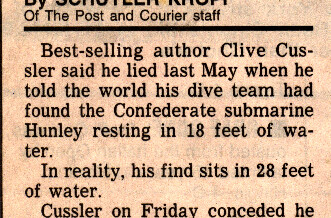 The other day I was poking fun at Clive Cussler. I must admit, it was only half in jest. Except for the hundreds of thousands of individual artifacts my team salvaged (and easy dissemination of that evidence on the internet), fiction writer Cussler could probably have gotten away with claiming credit for the Georgiana. And, I have no doubt that it really would have made the wreck far better known than I have been able to do.

GPS didn’t exist back in the 1960s and my original mapping of the Georgiana‘s location was off (but still okay by then government standards). In fact, the wreck site turned out to be barely inside our 250 yard radius area, as described in our the salvage license. (As opposed to my “X” for the wreck of the Hunley, where I was within the length of the salvage barge.)

Since the State waited almost 50 years before actually checking out my site (they finally made a one day trip to the wreck in 2011). Cussler could have claimed that I had simply found another wreck. Don’t forget, SCIAA (the South Carolina Institute of Archaeology & Anthropology) had only waited 25 years to check out the Hunley, and time usually makes things harder to prove, not easier.

Clive Cussler found it first! Where have I heard that before? Shades of the wrecks of the Hunley, Housatonic, Norseman, Stonewall Jackson, Ruby, Keokuk, Weehawken, and Rattlesnake.  LOL

I had even been in the “New York Times” and in local papers and magazines for discovering two of those (the blockade runners Norseman and Stonewall Jackson) a decade before Cussler claimed (in 1981) that he had “discovered” them. Back then, I actually thought his claims were a big joke on the press. Oh, if I had only foreseen the future, and the consequences of not looking like a fool myself and jumping up and down shouting “liar, liar, pants on fire!” LOL

But, I actually liked Cussler. I was a fan of his novels. He had taken time to seek me out to meet me, I was flattered. He seemed a friendly, charming rogue and I was too young to realize that I was only seeing an act. I even helped him out by sharing wreck locations and, afterwards, when he was claiming credit, letting him know that he had the identities of two of the wreck sites mixed up. Had I not kept my mouth shut, he might(?) have been exposed then and there. I say might, because certain reporters have always seemed to go along with Cussler, even on what I felt should have been see as obvious fabrications.

I already know that I’m not the only one who has had the “pleasure” of dealing with Cussler’s claims about “his” discoveries. Is there anyone who wants to add their own negative experiences with him to the list? I would have asked for people to add their positive experiences with him, but that would simply cloud the issue. I have no doubt their have been many positive experiences and many very real discoveries, but that is truly not the point. The point is — Cussler has made some very public claims that are demonstratively false and/or unfairly and improperly ignore the past work and discoveries of others. I want that exposed because if he is allowed to get away with it, others will think they can do it too. His claims have not only damaged me, they have distorted history. I suspect they have also discouraged others from publishing their own discoveries for fear that, because they aren’t already rich and famous, someone who is will highjack their wrecks.

I do give Clive Cussler credit though, he is the best teller of fiction that I have ever met. Its in his blood. I think its who he really is. I see him as an absolute, complete, perfect work of fiction! Earlier I was LOL (laughing on line), but perhaps I shouldn’t have been, after all this is serious.