Discovery of the SS Ozama

HomeDiscovery of the SS Ozama

News stories about the SS Ozama...

Click on images to go to news stories on the Ozama. Still more at end of this page.

Brief Overview of the Wreck & Its Discovery, written by Dr. E. Lee Spence

This is the wreck of an iron-hulled steamer. The site is in approximately 40’ of water about ten miles from the mouth of the Santee River and six nautical miles off the lighthouse at Cape Romain, South Carolina.

I first located the site in 1979 while searching with a proton magnetometer for a much earlier shipwreck with treasure on it. I can write about it now only because the United States Federal District Court has already ruled that I am the “true and exclusive owner” to all of the wreckage (not just the Ozama) that I have found on and around the outer shoal of Cape Romain. I have a five mile radius exclusive area.

Because of this wreck’s general type and condition, I suspected it dated from the late 19th or early 20th century. It was definitely not my original target, so I simply made a note of it as something to investigate later and moved on finding more and more shipwrecks in its general vicinity. They were all cataloged for future work.

In January of 2012, I included this site in an admiralty case that I filed with the United States court, claiming rights, as both salvor in possession and as the discoverer of lost and abandoned property, to all of the unidentified and abandoned wrecks that I had found within the area specified in my pleadings.

In August of 2012, the court officially recognized me as the “true and exclusive owner” of the wreckage.

In February of 2013, while doing research, I came across an 1894 newspaper account that gave me my first real clue as to this wreck’s identity. The paper told about the loss of the Ozama, an iron propeller steamer, which sank in six and a half fathoms (39’) of water, about six miles off the lighthouse. That fit with my wreck perfectly. Even the compass heading given in the article matched. 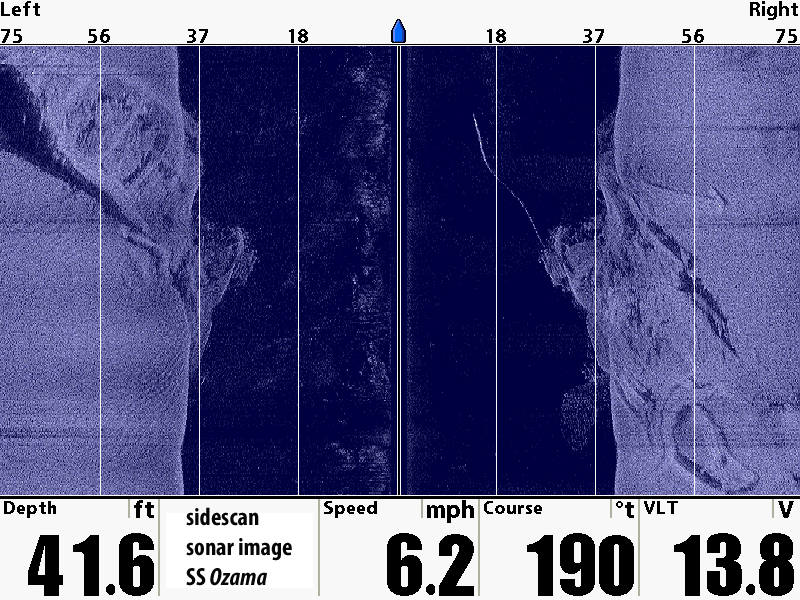 Humminbird 1198-c side-imaging sonar image of wreck of SS Ozama, dark blue in center is the water column
© 2013 by Spence Trust Inc. (May be reproduced under Creative Commons Attribution-ShareAlike 3.0 License)

A sonar survey, on site inspection and measurements made of the wreck and compared with those recorded for the Ozama in Lloyd’s Register of British and Foreign Shipping, have further confirmed the wreck’s identity. She is definitely the Ozama.

Team members who have worked with me on this part of the project include Operations Manager Rick Reely, Senior Diver Will Schexnayder, Diver Andrew Crabtree, and First Mate Guido Portella. As our work progresses, we hope to confirm the identities of several more wrecks in the Ozama’s immediate vicinity, which were also included in my admiralty claim. I have previously found gold and silver on a couple of them.

The Ozama has a very interesting story behind her, including being in the center of an international incident on one occasion and being involved in weapons smuggling on another. On still another voyage, she was used to transport hundreds of thousands of dollars, which, if it had been in gold (which it wasn’t), would have amounted to today’s equivalent of well over $25,000,000.

Because of her background, I have nicknamed her “The Smuggler Wreck.”

An effort is now underway by my salvage company, Spence Trust Inc. to locate and salvage the steamer’s safe(s) and any valuable cargo that might be on the wreck. I plan to leave the rest of the wreck in situ to be used for teaching both underwater archaeology and commercial diving. That training will probably be done as a joint venture between the Sea Research Society, a non-profit, educational research organization, and the International Diving Institute, a commercial diving school headquartered in Charleston. I am president and vice president of those organizations respectively. 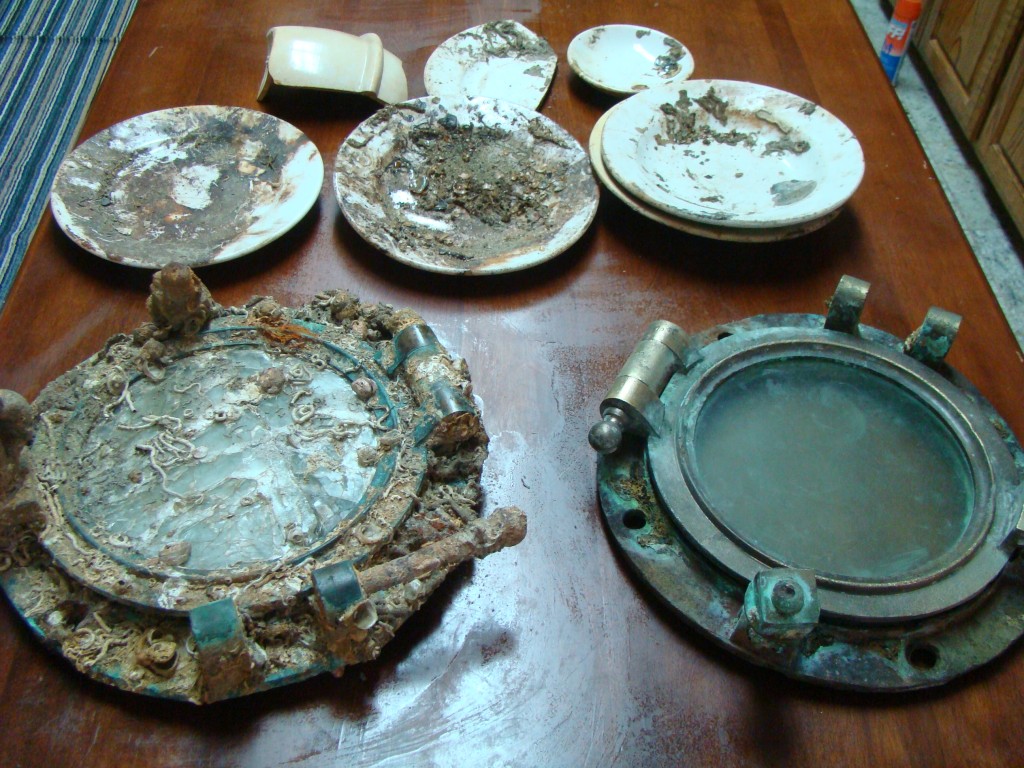 The first artifacts from the SS Ozama.
Photo 2013 by Lauren Spence

My company’s work at Cape Romain, as well our work relative to certain other wrecks, both on the Cape and elsewhere, is being funded by United Gold Exploration Limited, a British company, which has contracted to purchase up to 60% of the recovery.

Contemporary accounts of the SS Ozama’s loss reported her as bound to Charleston. That may well be correct, but, after considering the historical evidence, there is an abundance of evidence to show that Charleston would just have been a stop on her way south. Records show that she had left New York, which was her home port and had already stopped at Philadelphia. At each of those ports, she would normally have picked up passengers and/or cargo, as part of her regular route.

Her ultimate destination was the Caribbean island of Hispaniola (where she would have stopped at ports in Haiti and the Dominican Republic). Considering the time period and the events happening in Haiti, it is not unlikely that she carried a secret cargo in the form of arms and ammunition. Even after wrecking, the loss of such a cargo would not have been one her captain or owners would have wanted to broadcast, which might explain why her captain reported her as traveling “in ballast,” which means “without cargo.” And, because the death of Haiti’s president was considered imminent, the timing was certainly right for her carrying considerable money. Money for either shoring up the existing regime, or for financing an insurrection. Such money would have needed to be in gold, not paper.

The above posts all deal with the steamer Ozama, which was shipwrecked off Cape Romain, South Carolina in 1894 and discovered and identified by underwater archaeologist Dr. E. Lee Spence in 1979 and 2013 respectively. He also discovered other abandoned wreckage in the same general vicinity. In 2012, the Federal District Court ruled that Spence was the “true and exclusive owner of the abandoned wreckage” (which includes the Ozama and all of the other shipwrecks that he had found in the specific area designated in his court filing), which means he is already the legal owner of any and all shipwreck gold, silver, cannons, hulls, engines, rigging, and other artifacts on those wrecks. To learn more about shipwrecks in general, check out Spence’s page on Facebook. This is not and should not be considered part of any offering memorandum.