Perhaps the overall best source for researching Civil War shipwrecks is a set of books titled The Official Records of the Union and Confederate Navies in the War of the Rebellion. Better known as the “O.R.—Navy” or “ORN”, it consists of 30 volumes. Each volume is about a thousand pages long. They were compiled after the war and printed by the U.S. Government Printing Office in Washington, D.C. between 1894 and 1921, with one or more volumes coming out each year. Only a thousand copies of each volume were printed, but, even a hundred years later, many still survive.

These records include official correspondence, dispatches, excerpts from vessel logs, etc. and are an excellent source of contemporary records relating to shipwrecks of all types during the War Between the States. These wrecks range from blockade runners and ironclad warships to riverboats, barges and ferries. Shipwrecks of both steam and sail are well represented. Unfortunately the volumes are poorly indexed, so a careful reading of the records for a particular time period and location is frequently necessary. 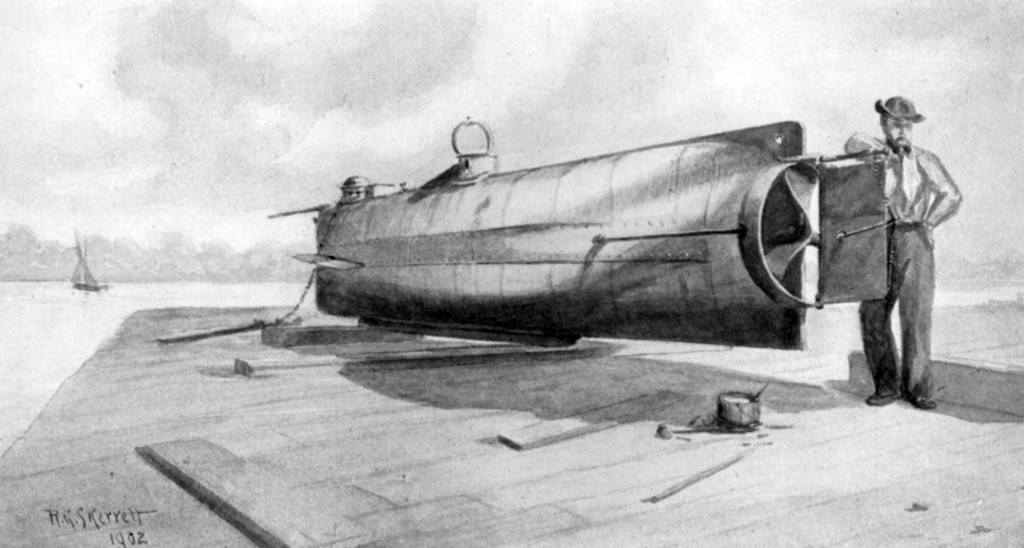 Sketch of the Hunley on a dock with one man next to it. Sketch by R.G. Skerrett dated 1902

Besides documenting the war in great detail, these volumes also included many engravings, sketches, maps and other illustrations. Some of the maps show specific locations of shipwrecks. Many of the vessels pictured were later shipwrecked, either during or after the war. I have included below a list of illustrations contained in each volume. (Note by ELS: I plan to add links to each of these illustrations as quickly as possible.)

Bound sets of these volumes are available for use at the National Archives and the Library of Congress as well as many other public libraries, including those of older colleges and universities. Copies on CD are also available as well as some digitized copies on the internet. Cornell University has scanned many of these using optical character recognition software to make them searchable via a computer. Unfortunately, age spots, paper imperfections, folds, tears, and damaged or partially filled in type used in the original books has resulted in numerous spelling errors, so searching can still be difficult. Word usage has also changed. For instance, shipwrecks were then simply referred to as wrecks. Cornell University Library has posted copies online as images, pdfs and text documents. They are definitely worth using.

For each of the volumes, I have included direct links to Cornell’s online versions. Linked are in blue and are underlined.

Map of the Roanoak River showing the wrecks of two schooners and the steamer Southfield, which were sunk at Plymouth, North Carolina.

Reports on pages 658 and 659 of Volume 15, Series 1 of the ORN telling of the loss of the blockade runner Mary Bowers by running aground on the wreck of the Georgiana.

Read more about this amazing collection of records:
Researching the Official Records by John B. Phillips