Discovery of the SS United States Wrecked in 1881

HomeDiscovery of the SS United States Wrecked in 1881

Just in time for the patriotic festivities of July 4th, 2013, underwater archaeologist Dr. E. Lee Spence announced the identity of still another vessel in the cluster of shipwrecks he discovered off Cape Romain, South Carolina. Its the propeller steamer United States, which was built in 1864 and was lost in 1881. 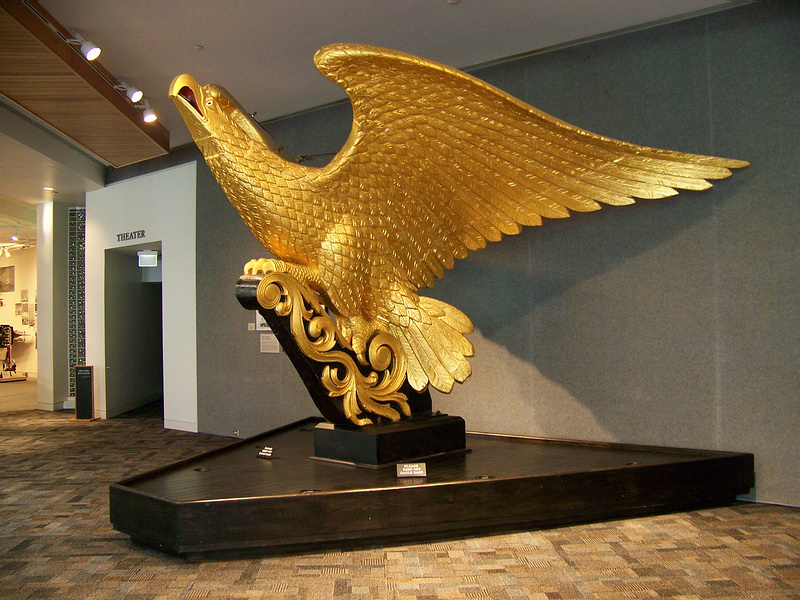 To Dr. Spence this shipwreck is extra special, “When I was 12, my family crossed the Atlantic in another SS United States, and I have wonderful memories of that voyage. She was the pride of the American fleet. It seems a fortuitous coincidence that, over 50 years later, I would be salvaging a steamer by the same name.”

Dr. Spence’s team found the shipwreck in January of 2011, and he immediately suspected what she might be but only recently assembled enough research and archaeological evidence to positively identify her as the remains of the SS United States built in 1864.

The steamer’s wood hull was built of oak and cypress fastened with brass spikes and pins. Her bottom was sheathed with copper to protect her from sea worms and marine growth. She was 197 feet in length and over 36 feet in breadth. Capable of steaming or sailing, besides a giant propeller, she had two masts. Her foremast was square rigged, while her mainmast was was fore-and-aft rigged. “I identified her by matching the archaeological evidence with her historical dimensions and construction details as well as contemporary news accounts of her loss,” said Dr. Spence. 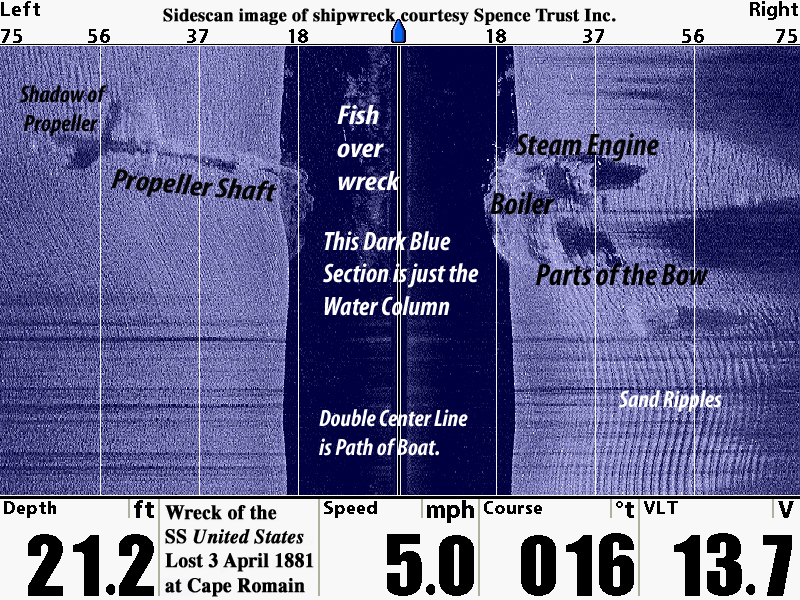 Sidescan sonar image of SS United States with added text.
This image was made with an 1198C Humminbird side-imaging sonar

The Shoals & Shipwrecks of Cape Romain

The wreck is part of a veritable ship’s graveyard discovered by Dr. Spence in a series of short, mini-expeditions in the past 30 years. The ships were lost there because of a shallow shoal located about five miles off the tip of Cape Romain. The first European vessel to run on the cape’s treacherous shoals was a Spanish ship in the early 1500s. Most of the wrecks that Spence has found, which span a several hundred years time period, have yet to be identified. Some may never be.

The wreck now identified as the SS United States was found by Dr. Spence’s 2011 Cape Romain mini-expedition. The first two expedition members on the wreck were divers Mike Stearns and Brandon Fulwider of Caribbean Explorers LLC. “Other than one or two dives, nothing more was done until this year when my company, Spence Trust Inc., signed a contract with United Gold Explorations Limited in the UK,” says Dr. Spence. He also says, “Although the Cape has been of major interest to me for decades, I have had a lot of other shipwreck projects in other countries, and this is the first time we will be working these wrecks with the proper equipment and funding.” 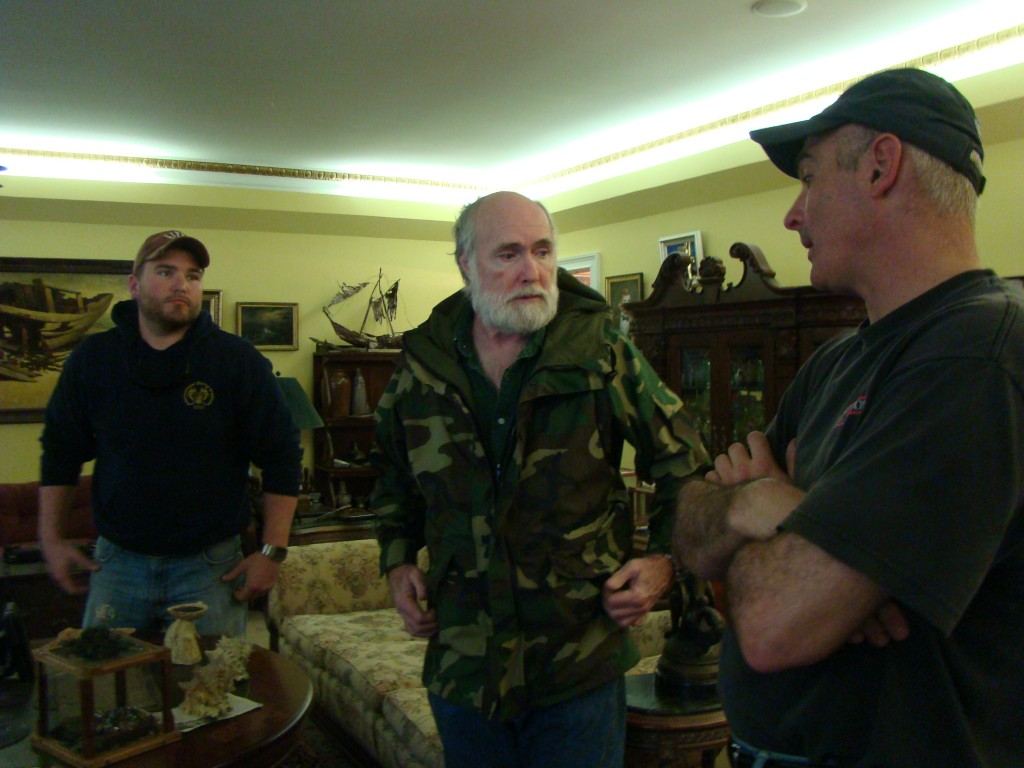 Besides Dr. Spence, who is both the project’s Director and its Chief Archaeologist, team members who have worked on this part of the project include Operations Manager Rick Reely, Senior Diver Will Schexnayder, Diver Andrew Crabtree, and First Mate Guido Portella.

The SS United States was a “well known steamer” that typically ran between Boston and Savannah and was carrying a “general cargo” when she wrecked. A general cargo could include anything from gold jewelry to bottles of whiskey. Dr. Spence has previously recovered jewelry from other shipwrecks and once salvaged excellent tasting Scotch and Champagne from a steamer wrecked in the Great Lakes in 1913, so he has high hopes for finding similar items on the United States.

In 1970, Dr. Spence discovered the wreck of the Civil War submarine H.L. Hunley in 27 feet of water north of the Charleston shipping channel. The Hunley was the first submarine in history to actually sink an enemy ship. Dr. Spence, at the official request of the South Carolina Hunley Commission, donated his rights to the Hunley to the State of South Carolina, and the wreck has since been raised and its crew buried with military honors. Dr. Spence has found numerous other shipwrecks and has, in the course of his career, salvaged over a million individual artifacts, ranging from coins to cannons, and including things like tiny brass pins and lead musket balls.

The Wreck of SS Ozama

Just last month (June 2013), Dr. Spence, with his team’s help, identified an iron hulled steamer that he had found at the Cape as the SS Ozama wrecked in 1894. The Ozama had been involved in gun running and carrying large amounts of money. He says, “we are holding off on digging into her for safety reasons. We don’t want to move too much wreckage until we have completed some structural studies. She is largely intact, but if we’re not careful the wreck could cave in on us. No one died when the Ozama sank and we don’t want someone to die now that its been discovered.”

All of Dr. Spence’s shipwrecks at Cape Romain are outside of South Carolina’s legal jurisdiction so the State isn’t entitled to any of the artifacts. However, Dr. Spence, who has already been declared the “true and exclusive owner” of all of the wreckage by the Federal court, is planning to donate some of the artifacts to the State’s museums. The ships themselves will be left in place and will eventually be used to train underwater archaeologists and salvors.

Information on: Her loss off Cape Romain

This page deals with the steamer United States, which was shipwrecked off Cape Romain, South Carolina in 1881 and discovered and identified by underwater archaeologist Dr. E. Lee Spence. He also discovered other abandoned wreckage in the same general vicinity. In 2012, the Federal District Court ruled that Spence was the “true and exclusive owner of the abandoned wreckage” (which includes the United States and all of the other shipwrecks that he had found in the specific area designated in his court filing), which means he is already the legal owner of any and all shipwreck gold, silver, cannons, hulls, engines, rigging, and other artifacts on those wrecks. To learn more about shipwrecks in general, check out Spence’s page on Facebook. This is not and should not be considered part of any offering memorandum.