HomeDiscovery of the Hunley2007 “U.S. News & World Report” Credited Spence as First to Find Wreck of the Hunley

An article published in 2007 in the U.S. News & World Report
credited underwater archaeologist E. Lee Spence with finding the Hunley in 1970.

When the July 2-9, 2007, issue of U.S. News & World Report with its article on the submarine H. L. Hunley hit the news-stands, there was still a federal court case being fought between underwater archaeologist Dr. E. Lee Spence and fiction-writer Clive Cussler over who actually discovered the wreck. Cussler was saying he found it in 1995, and Spence was saying he had found the wreck and properly reported it to government officials 25 years earlier. The Hunley was unique because it was the first submarine in history to actually sink an enemy ship. Government archaeologists were describing it as “the most important (underwater) archaeological discovery of the (20th) century.” So, both sides wanted a court decision in their favor that would settle the dispute once and for all. 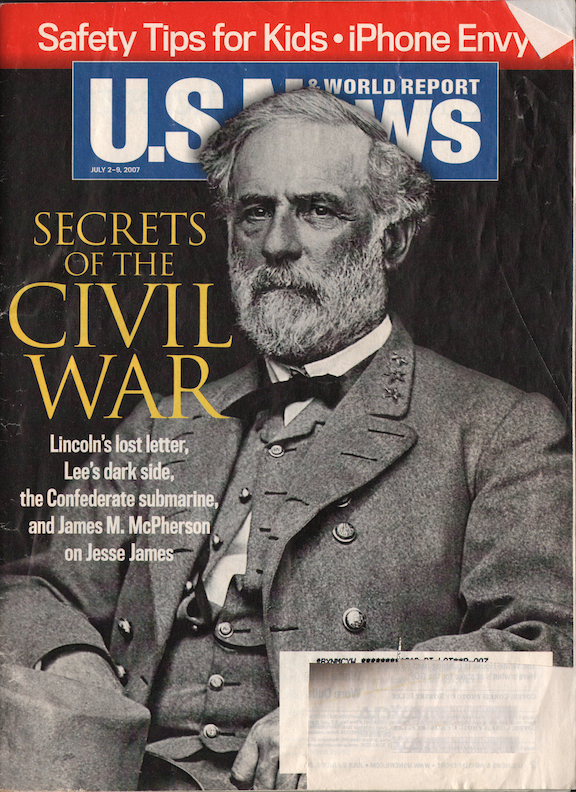 A copy of all four pages of U.S. News & World Report’s article appears after the following text.

Unlike a lot of the prior local coverage about the Hunley, which had been heavily influenced by Senator Glenn F. McConnell (a South Carolina politician who wanted Cussler credited), the U.S. News & World Report’s article was extremely well researched. Despite having obviously interviewed McConnell, the article’s authors credited Spence with finding the Hunley in 1970. After its publication, Cussler’s attorney’s successfully had Spence’s case against Cussler thrown out on the basis that Spence had waited too long to file his case, which had claimed Cussler was lying, and they dropped Cussler’s case against Spence, which meant the dispute was never actually settled by the court.

Spence, found the wreck in 1970, but had no photos to show because in 1970 he owned no underwater cameras that were even remotely capable of taking photos in the limited visibility at the wreck site. By the time Spence did obtain such a camera, the wreck had been covered over by the shifting sands and he was being told by the government officials not to dig into or disturb the wreck in any way or face arrest.

Spence has always held that his proof of discovery were the maps he drew and published that correctly showed its location. He correctly points out that credit for lots of discoveries have been based solely on written notes and mapped locations.

Despite the wreck’s being covered, Spence was easily able to relocate it by using the magnetic bearings that he had taken the day he first found the wreck, and by searching with a proton magnetometer, which was able detect the sub’s iron mass even under the sand. And, since GPS didn’t exist back then, Spence, while anchored directly over the wreck, had used a World War Two era sextant to precisely measure the angles between several channel buoys and two lighthouses. Using those angles, Spence carefully plotted and mapped the Hunley’s location. He then published the mapped location, mailing copies to numerous government officials. He even published detail from one of his maps in a book that came out just month’s before divers went to the site in 1995, dug up the wreck and took video of it.

In October of 2000 a scientist at the University of South Carolina determined that Spence’s mapped location closely matched the Hunley’s official GPS location. In fact, despite the relatively primitive methods used by Spence and despite the wreck being over 3.5 nautical miles from the closest shore, both Spence’s plotted location and the government’s GPS location, were apart by less than the length of the salvage barge that was ultimately used to raise the wreck. When both locations were plotted on the standard chart of the area, they fell within a circle of less than 21 thousandths of an inch in diameter. As Spence says, that was not just a lucky guess.

Cussler’s discovery claim was based on video taken by divers, who were part of an expedition initiated and directed by underwater archaeologist Dr. Mark Newell, of the South Carolina Institute of Archaeology & Anthropology (SCIAA), which is part of the Executive Branch of the State of South Carolina. The divers had been able to dig up the wreck, without facing prosecution, only because the expedition was officially being done as a SCIAA expedition. Although Cussler admittedly never dove on the wreck, and wasn’t even on the boat when the divers dug it up, he apparently thought he should be credited with the discovery because he had underwritten part of the expedition’s costs. According to his sworn deposition, Cussler was also of the opinion that even when something’s location is well known to others (he used a water fountain as an example), each person who came along and saw it would have discovered it. Incidentally, during the court case, Newell, gave a sworn, video-taped deposition in which he not only acknowledged using Spence’s published maps to plan his SCIAA expedition, he clearly stated that he believed Spence had found the wreck in 1970.

Go to http://shipwrecks.com/hunley_discovery/ to read more about Spence’s discovery of the Hunley. 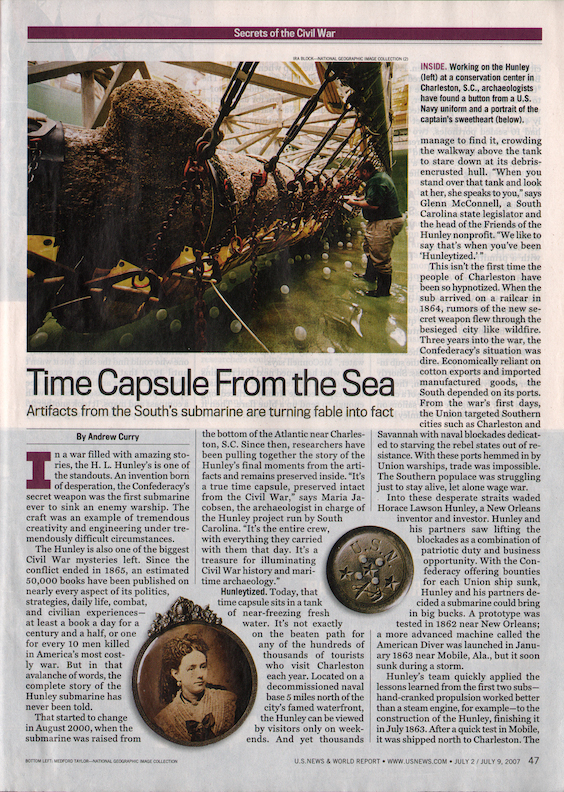 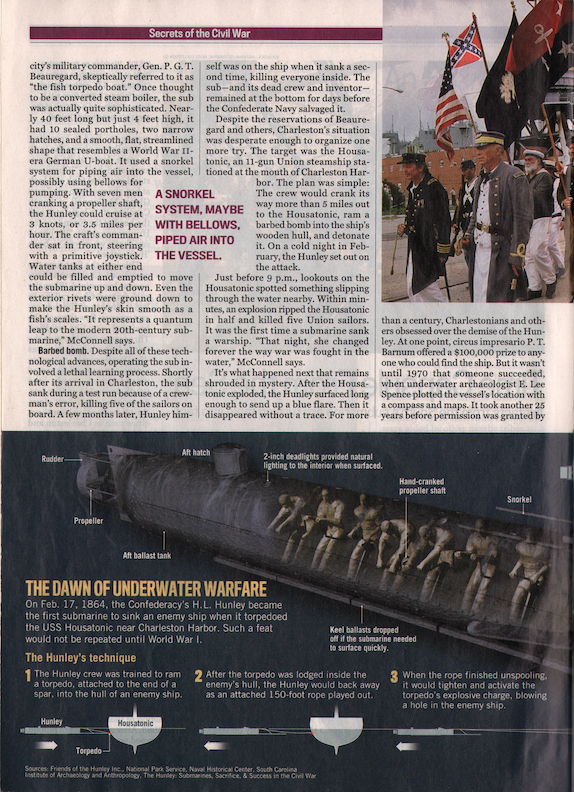 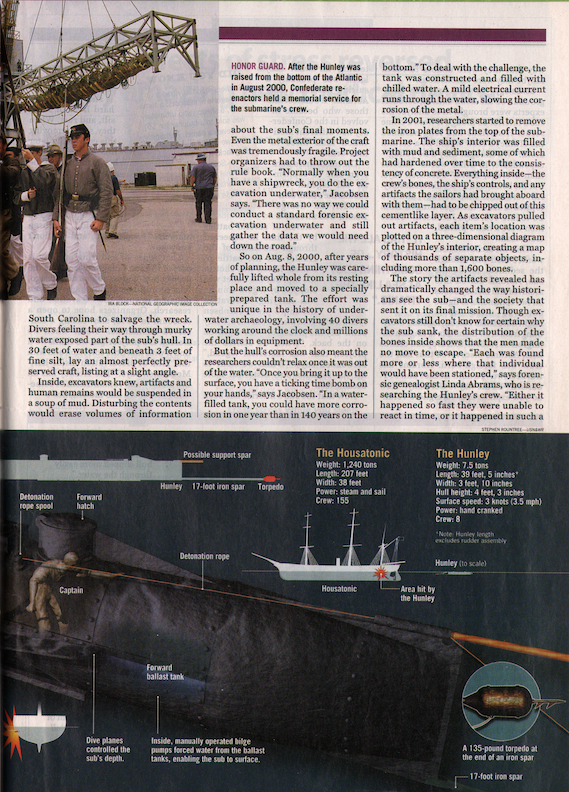 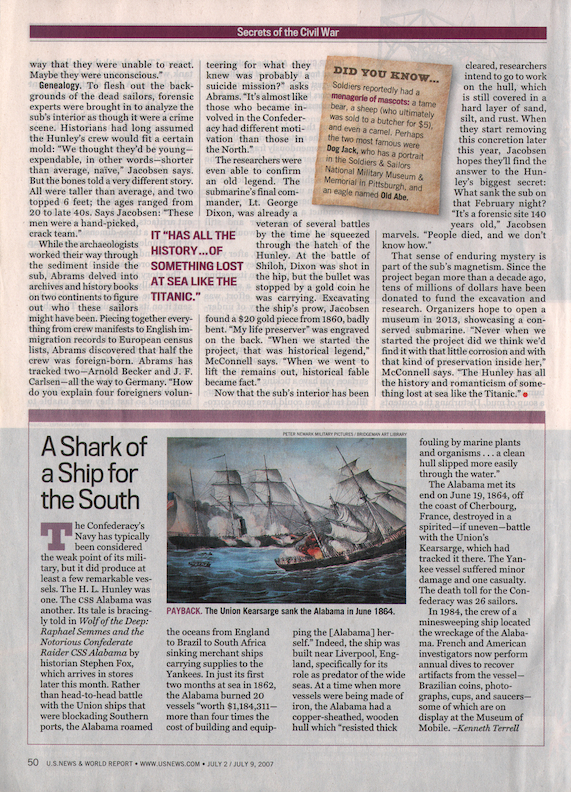 Go to http://shipwrecks.com/hunley_discovery/ to read more about Spence’s discovery of the Hunley.