The following is Brian Chamberlain’s article “U.S. Civil War wreck: H.L. Hunley Submarine,” which was published January 8, 2015, in issue #69 of “X-Ray Mag.” “X-Ray Mag” is an international diving magazine which is published in English online out of Denmark.

The article credits Dr. E. Lee Spence with discovering the wreck of the Hunley in 1970. Chamberlain, who was aware of novelist Clive Cussler’s claims to have discovered the wreck in 1995, writes that “in 1970, pioneer underwater archaeologist, E. Lee Spence, then just 22 years old, found the Hunley”. That is significant because, in addition to Chamberlain meeting with Spence and thoroughly reviewing Spence’s evidence, Chamberlain interviewed several of the government archaeologists who accept Cussler’s discovery claims as true, even though they have never bothered to meet with Spence to review all of Spence’s evidence. Chamberlain clearly felt Spence’s evidence sufficiently proves Spence’s 1970 discovery claims, as although Chamberlain mentions Cussler in the article, he only credits Cussler with partially funding a 1995 expedition that dug up and took the first pictures of the wreck. For those who may not be aware of it, that expedition was both initiated and directed by Dr. Mark Newell. (Note by ELS: Dr. Newell has given sworn statements saying that he believes Spence discovered the Hunley in 1970.)

If you click on the pages shown below, each should open in a separate window and allow you to better read the text. The complete text is also given at the end of this page. 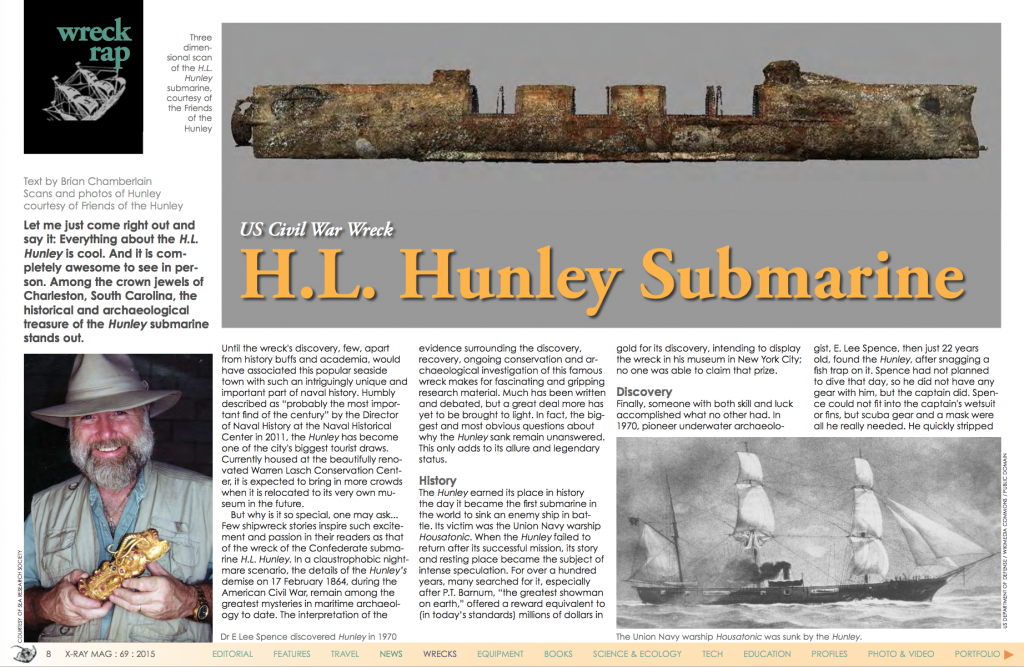 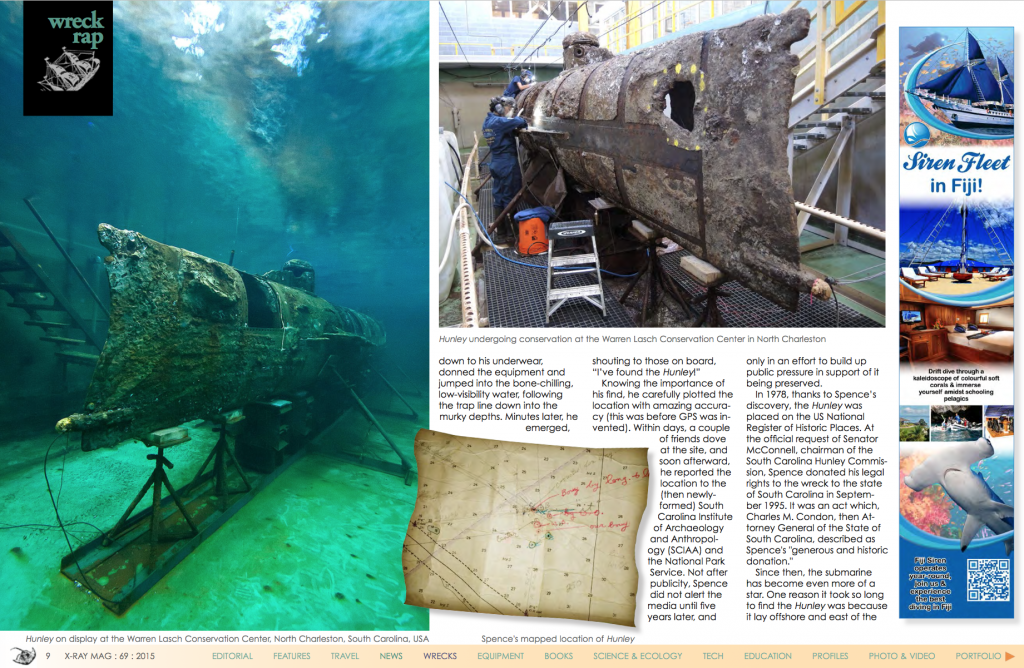 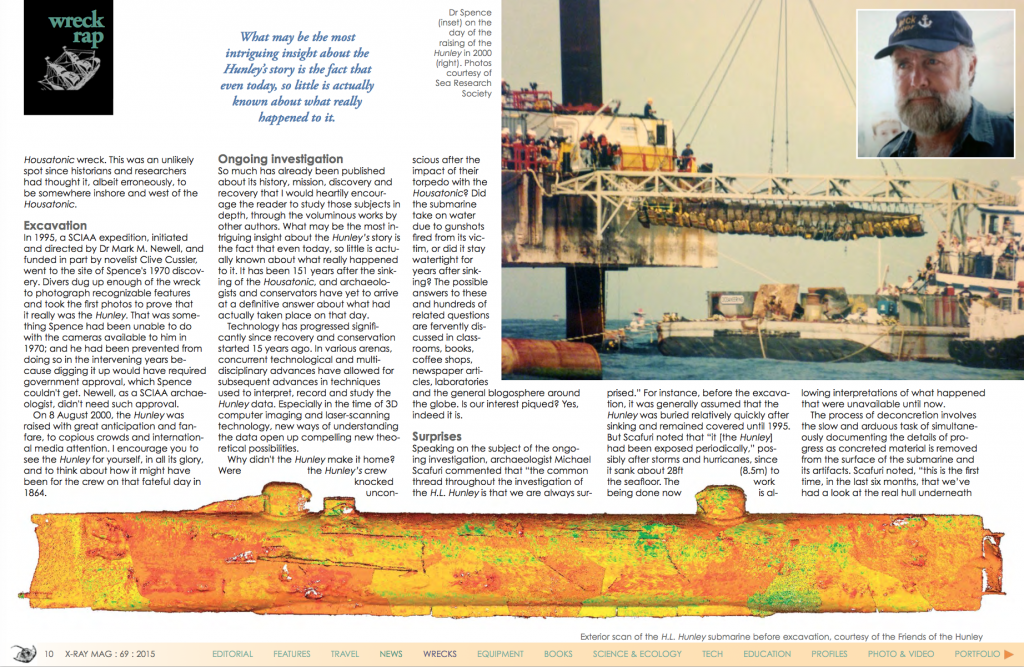 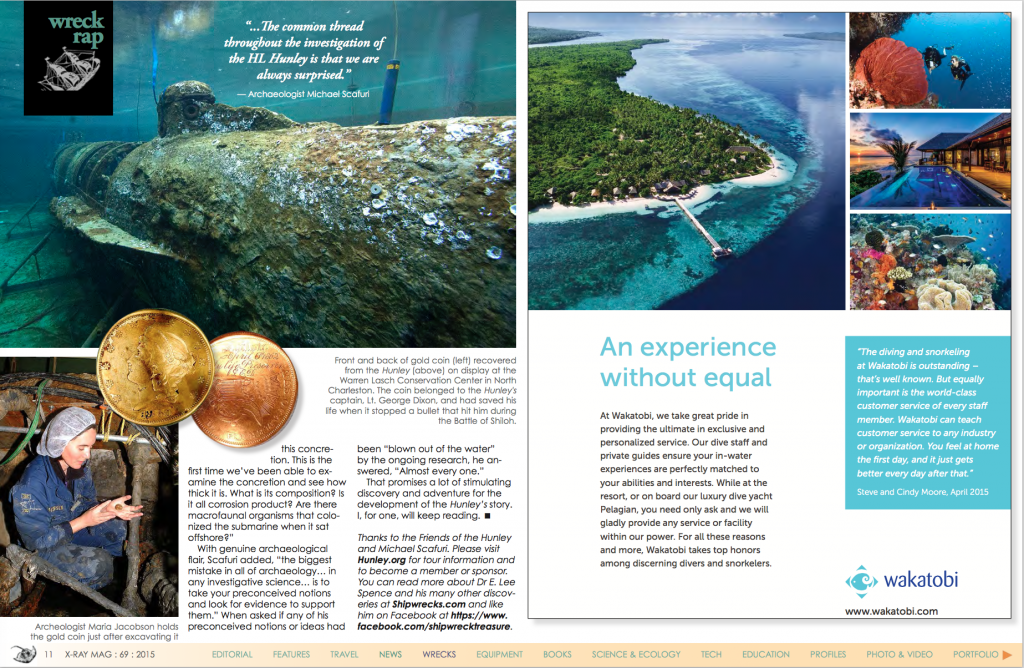 By Brian Chamberlain
Posted in section: WRECKS & ARCHAEOLOGY ARTICLES FROM X-RAY MAG (Note: X-Ray Magazine has a link to download a PDF file of the article, complete with pictures.)

Let me just come right out and say it: Everything about the H.L. Hunley is cool. And it is completely awesome to see in person. Among the crown jewels of Charleston, South Carolina, the historical and archaeological treasure of the Hunley submarine stands out.

Until the wreck’s discovery, few, apart from history buffs and academia, would have associated this popular seaside town with such an intriguingly unique and important part of naval history. Humbly described as “probably the most important find of the century” by the Director of Naval History at the Naval Historical Center in 2011, the Hunley has become one of the city’s biggest tourist draws. Currently housed at the beautifully renovated Warren Lasch Conservation Center, it is expected to bring in more crowds when it is relocated to its very own museum in the future.

But why is it so special, one may ask…

Few shipwreck stories inspire such excitement and passion in their readers as that of the wreck of the Confederate submarine H.L. Hunley. In a claustrophobic nightmare scenario, the details of the Hunley’s demise on 17 February 1864, during the American Civil War, remain among the greatest mysteries in maritime archaeology to date. The interpretation of the evidence surrounding the discovery, recovery, ongoing conservation and archaeological investigation of this famous wreck makes for fascinating and gripping research material. Much has been written and debated, but a great deal more has yet to be brought to light. In fact, the biggest and most obvious questions about why the Hunley sank remain unanswered. This only adds to its allure and legendary status.

The Hunley earned its place in history the day it became the first submarine in the world to sink an enemy ship in battle. Its victim was the Union Navy warship Housatonic. When the Hunley failed to return after its successful mission, its story and resting place became the object of intense speculation. For over a hundred years, many searched for it, especially after P.T. Barnum, “the greatest showman on earth,” offered a reward equivalent to (in today’s standards) millions of dollars in gold for its discovery, intending to display the wreck in his museum in New York City; no one was able to claim that prize.

Finally, someone with both skill and luck accomplished what no other had. In 1970, pioneer underwater archaeologist, E. Lee Spence, then just 22 years old, found the Hunley, after snagging a fish trap on it. Spence hadn’t planned to dive that day, so he did not have any gear with him, but the captain did. Spence could not fit into the captain’s wetsuit or fins, but scuba gear and a mask were all he really needed. He quickly stripped down to his underwear, donned the equipment and jumped into the bone-chilling, low-visibility water, following the trap line down into the murky depths. Minutes later, he emerged, shouting to those on board, “I’ve found the Hunley!”

Knowing the importance of his find, he carefully plotted the location with amazing accuracy (this was before GPS was invented). Within days, a couple of friends dove at the site, and soon afterward, he reported the location to the (then newly-formed) South Carolina Institute of Archaeology and Anthropology (SCIAA) and the National Park Service. Not after publicity, Spence did not alert the media until five years later, and only in an effort to build up public pressure in support of it being preserved.

In 1978, thanks to Spence’s discovery, the Hunley was placed on the US National Register of Historic Places. At the official request of Senator McConnell, chairman of the South Carolina Hunley Commission, Spence donated his legal rights to the wreck to the state of South Carolina in September 1995. It was an act which, Charles M. Condon, then Attorney General of the State of South Carolina, described as Spence’s “generous and historic donation.” Since then, the submarine has become even more of a star.

One reason it took so long to find the Hunley was because it lay offshore and east of the Housatonic wreck. This was an unlikely spot since historians and researchers had thought it, albeit erroneously, to be somewhere inshore and west of the Housatonic.

In 1995, a SCIAA expedition, initiated and directed by Dr Mark M Newell, and funded in part by novelist Clive Cussler, went to the site of Spence’s 1970 discovery. Divers dug up enough of the wreck to photograph recognizable features and took the first photos to prove that it really was the Hunley. That was something Spence had been unable to do with the cameras available to him in 1970; and he had been prevented from doing so in the intervening years because digging it up would have required government approval, which Spence couldn’t get. Newell, as a SCIAA archaeologist, didn’t need such approval.

On 8 August 2000, the Hunley was raised with great anticipation and fanfare, to copious crowds and international media attention. I encourage you to see the Hunley for yourself, in all its glory, and to think about how it might have been for the crew on that fateful day in 1864.

So much has already been published about its history, mission, discovery and recovery that I would heartily encourage the reader to study those subjects in depth, through the voluminous works by other authors. What may be the most intriguing insight about the Hunley’s story is the fact that even today, so little is actually known about what really happened to it. It has been 151 years after the sinking of the Housatonic, and archaeologists and conservators have yet to arrive at a definitive answer about what had actually taken place on that day.

Technology has progressed significantly since recovery and conservation started 15 years ago. In various arenas, concurrent technological and multi-disciplinary advances have allowed for subsequent advances in techniques used to interpret, record and study the Hunley data. Especially in the time of 3D computer imaging and laser-scanning technology, new ways of understanding the data opens up compelling new theoretical possibilities. Why didn’t the Hunley make it home? Were the Hunley’s crew knocked unconscious after the impact of their torpedo with the Housatonic? Did the submarine take on water due to gunshots fired from its victim, or did it stay watertight for years after sinking? The possible answers to these and hundreds of related questions are fervently discussed in classrooms, books, coffee shops, newspaper articles, laboratories and the general blogosphere around the globe. Is our interest piqued? Yes, indeed it is.

Speaking on the subject of the ongoing investigation, archaeologist Michael Scafuri commented that “the common thread throughout the investigation of the H.L. Hunley is that we are always surprised.” For instance, before the excavation, it was generally assumed that the Hunley was buried relatively quickly after sinking and remained covered until 1995. But Scafuri noted that “it [the Hunley] had been exposed periodically,” possibly after storms and hurricanes, since it sank about 28 feet to the seafloor. The work being done now is allowing interpretations of what happened that were unavailable until now.

The process of deconcretion involves the slow and arduous task of simultaneously documenting the details of progress as concreted material and is removed from the surface of the submarine and its artifacts. Scafuri noted, “this is the first time, in the last six months, that we’ve had a look at the real hull underneath this concretion. This is the first time we’ve been able to examine the concretion and see how thick it is. What is its composition? Is it all corrosion product? Are there macrofaunal organisms that colonized the submarine when it sat offshore?”

With genuine archaeological flair, Scafuri added, “the biggest mistake in all of archaeology…in any investigative science…is to take your preconceived notions and look for evidence to support them.” When asked if any of his preconceived notions or ideas had been “blown out of the water” by the ongoing research, he answered, “Almost every one.”

That promises a lot of stimulating discovery and adventure for the development of the Hunley’s story. I, for one, will keep reading. ?

Thanks to the Friends of the Hunley and Michael Scafuri. Please visit www.hunley.org for tour information and to become a member or sponsor. You can read more about Dr E. Lee Spence and his many other discoveries at www.shipwrecks.com and like him on Facebook at https://www.facebook.com/shipwrecktreasure.

For Dr. Spence’s article on the discovery of the Hunley, please see: http://shipwrecks.com/hunley_discovery/