YELLOW METAL FOUND ON SHIPWRECKS: One of the first shipwrecks that I researched as a young teenager got me extremely excited. One of the ship’s officers, who had been engaged in salvaging materials from his wrecked ship, mentioned that he had been unable to recover the “Yellow Metal.” The first “Yellow Metal” to spring to mind was gold, so my excitement was natural. I thought the ship’s officer was simply being secretive about the loss. As I later learned, that was not the case, the “Yellow Metal” was simply a special alloy of brass that was rolled into sheets and used to cover the hulls of ships to protect them from marine growth and boring bi-valves. Yes, it was valuable, but it was definitely not gold.

Pictured here is a sheet of Yellow Metal recovered from one of the shipwrecks that I have been working off Cape Romain. I have also included a close up of the patent mark on the sheet. In part, the mark reads “Muntz’s Patent,” so there is no question of what it is. According to some sources, the number 26, enclosed in an oval, records the ounces per square foot of metal used for this sheet. However, our 4 foot by 14-inch sheet (totaling 4.666 square feet) weighed only 89.6 ounces, or just over 19.2 ounces per square foot. The lower weight may be explained by loss of metal through electrolytic action in seawater, or perhaps the number 26 relates to the sheets thickness and not its weight. On each end of the oval there is a ‘3’, the meaning of which is not clear.

If you look closely at the full sheet of metal, you can tell where it was once overlapped by two other pieces of sheathing. Those two overlap marks help establish which side of the ship this particular sheet came from. Since on merchant vessels the upper pieces of sheathing overlapped the lower, and we know this was a merchant vessel, it allows us to properly rotate and orient the piece. And, once we have turned it to its proper orientation (i.e. with the overlap mark at the top), it puts the end with the other overlap mark on its right. And, since the overlap of hull sheathing on both military and merchant vessels always “faced aft,” that combination of overlaps would only be the case with a piece taken from the starboard side. 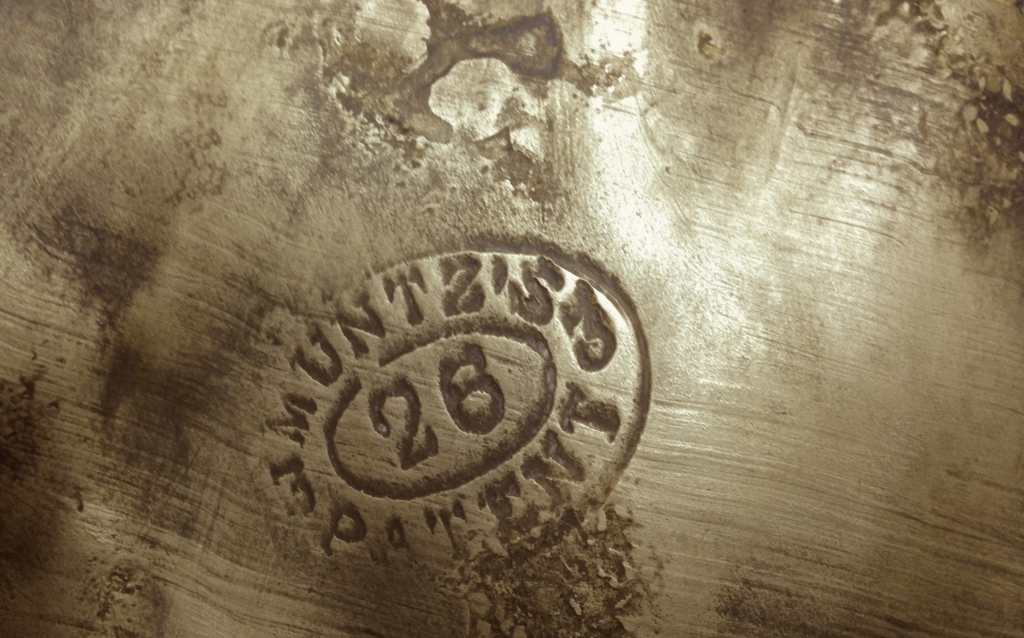 Maker’s mark saying “Muntz’s Patent” with 26 in an oval stamped into the “Yellow Metal” hull sheathing.

Muntz metal, which is usually called “Yellow Metal” or abbreviated as “Y.M.” in Lloyd’s Register and in ship’s logs, is a variety of the alloy brass consisting of 60 percent copper, 40 percent zinc and a trace of iron, named after the English businessman George Frederick Muntz, a metal-roller in Birmingham, England, who manufactured and sold the alloy following his patent of 1832 (#6325). Note: According to Muntz’s patent, his alloy can vary to 50% copper and 50% zinc. It was rolled at “red heat.”

Its original application was as a replacement for copper sheathing on the bottom of ships, as it maintained the anti-fouling abilities of the pure copper at around two thirds of the price. It became the material of choice for this application and Muntz made his fortune.

It was found that copper would gradually leach from the alloy in seawater, poisoning any organism that attempted to attach itself to a hull sheathed in the metal. Thus, it was used in warm waters as a protection against shipworms (especially the teredo). After successful experimentation with the sheathing Muntz also took out a patent for bolts of the same composition. These too proved a success as they not only were cheaper but also very strong and lasted longer. They also solved the serious problem of electrolysis between the hull sheeting and the hull fastenings, which had previously been made of copper or iron.

The sheet we recovered from the Cape Romain shipwreck measured 48-inches by 14-inches. 48-inches by 14-inches was the standard size for sheathing British and American ships, as the sheets were designed to join midway between the horizontal edges of the outer hull planking. With the hull planks were a standard 12-inches wide, the necessary width of the sheet was 14-inches to allow a 1-inch overlap at the top and bottom of each sheet. A layer of pitch or tar was spread across the planking before the sheets were attached. Each sheet had the holes for the nails punched by a small hand punch that was made with a collar to prevent the hole from being made larger that necessary to take the nail.

The overlap on the vertical ends “faced aft” to help reduce water being forced into the joint and lifting the sheets. On merchant ships the horizontal joints faced down, while the British Royal Navy applied horizontal joints that faced upwards. So, when the sheeting is found attached to the hull, it not only allows a determination to be made as to the bow and stern but whether the vessel was part of the merchant service.

The arrangement of the tacks (nails) on the sheets varied considerably between shipyards and over time. On our recovered sheet they were 2-inches apart along each edge (i.e. the overlap) and 4-inches apart on the main part of the sheet and the rows are staggered, which was fairly typical. 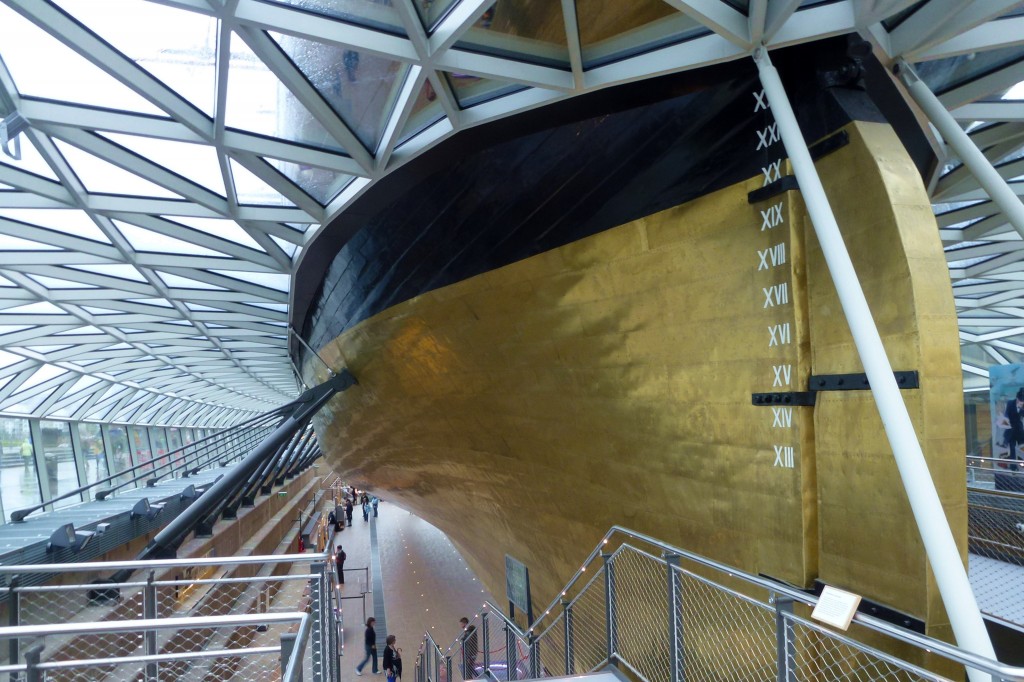 “Yellow Metal” protective sheathing on the hull of the clipper ship Cutty Sark.

Muntz’s new metal contained more copper, less zinc, and a bit of iron not present in a similar 56:44 alloy patented by William Collins in 1800. Prior to that the copper alloy sheeting had been primarily copper.

Production of Muntz’s new metal began on Water Street, Birmingham, but moved to Swansea in 1837. Eventually as the business outgrew Muntz’s own rolling mill in Birmingham, he joined in partnership with Pascoe Grenfell and sons who produced it at their Swansea mill as ‘Muntz’s Patent Metal Company’. They and other partners then fixed the prices of the alloy at £18 per ton lower than the market price for the equivalent copper product, serving to establish Muntz Metal as the sheathing of choice where transport costs still kept it as an efficient competitor. As an example of their success in entering the market, fifty ships were sheathed with Muntz Metal in 1837, over one hundred in 1838, doubling in 1840 and doubling again by 1844.

With Muntz successfully supervising the manufacturing operations, by 1840 Muntz’s Patent Metal Company was producing 2,000 tons yearly. Three years later the Company was producing 3-4000 tons yearly at £8 per ton profit. By then the Grenfells had left the partnership, for the agreement with Pascoe Grenfell & Sons had been terminated with some acrimony in 1842. When Muntz’s patent expired in 1846, they and others began making fastenings and sheathing to the Muntz patent at will.

Muntz died in 1857, to be succeeded by his eldest son, also called George Fredrick, who sold it in 1864 to a joint stock company, Muntz’s Metal Co. Ltd. In 1921 the company was bought by Elliott’s Metal Company, which became part of Imperial Chemical Industries’ Imperial Metals division (now IMI plc) in 1928.

Staniforth, Mark, 1985. “The Introduction and use of copper sheathing: A history.” The Bulletin of the Australian Institute for Maritime Archaeology, vol.9. no. 1 & 2. pp. 21-48