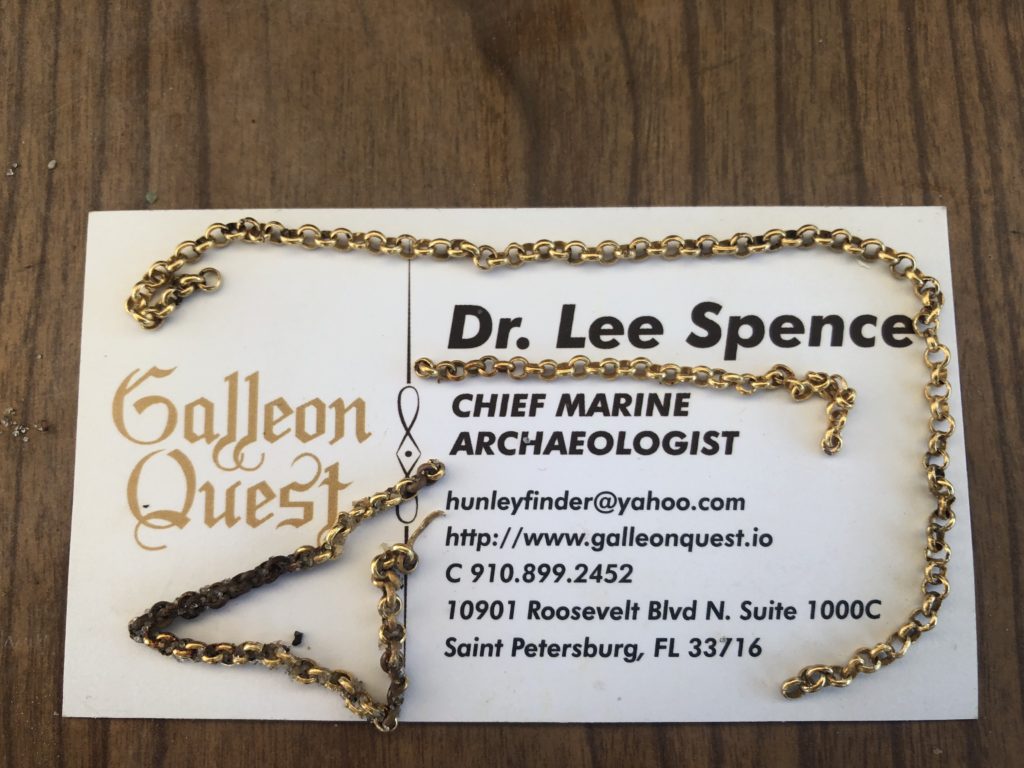 My shipwreck expedition, which is actually a joint-venture funded by Galleon Quest (a crypto-currency company, which is securing its tokens with shipwreck artifacts and treasure), has run into, but has overcome, some extremely tough problems: starting with the loss of my wife (Lauren McEntire Spence), due to a tragic accident at the very beginning of the expedition, to unavoidable delays caused by hurricane Florence, which roiled the seas and dumped millions of cubic feet of water on the Carolinas resulting in flood waters that carried uncounted tons of trash and silt into the ocean, temporarily destroying visibility around the wrecks. But the expedition is already well underway and we are very excited at what we’ve accomplished so far.

We are working a cluster of shipwrecks that I (Dr. E. Lee Spence) discovered around a dangerous shoal located well over three nautical miles from the nearest shore. I am fortunate in that after filing a claim in U.S. District Court to literally everything on them, their hulls, ballast, cargoes, passenger’s effects, artifacts, treasures, under both the law of salvage and the law of finds, I was able to obtain the judge’s order recognizing me as the exclusive owner of the wrecks. 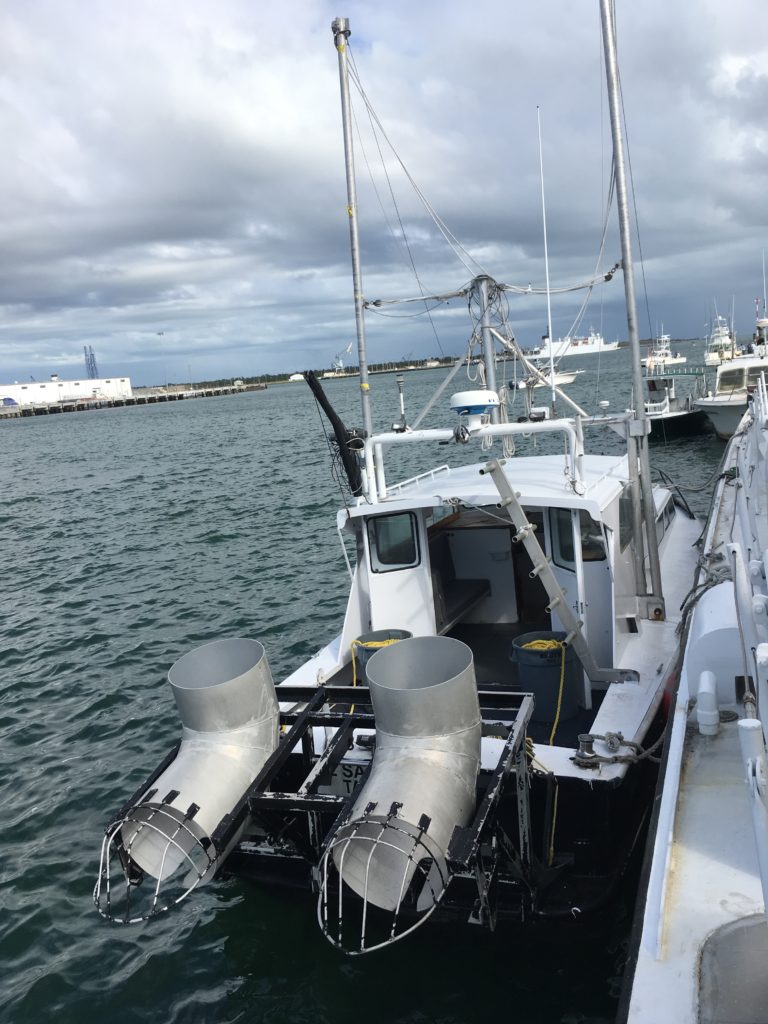 Sea Research Society’s research vessel Sea Survey. This 33 feet long vessel has an aluminum hull and was originally built as a police patrol boat. The R/V Sea Survey has two powerful Diesel engines and twin prop wash deflection units that can be used to dig or just to blow the clearer surface waters down to the divers. She is currently fitted with three Humminbird® side imaging sonar units.

Our first finds were made using Sea Research Society’s research vessel Sea Survey. Those artifacts came from a merchant ship that was probably built in the 18th Century and which appears to have been wrecked in the late 1790s or early 1800s. 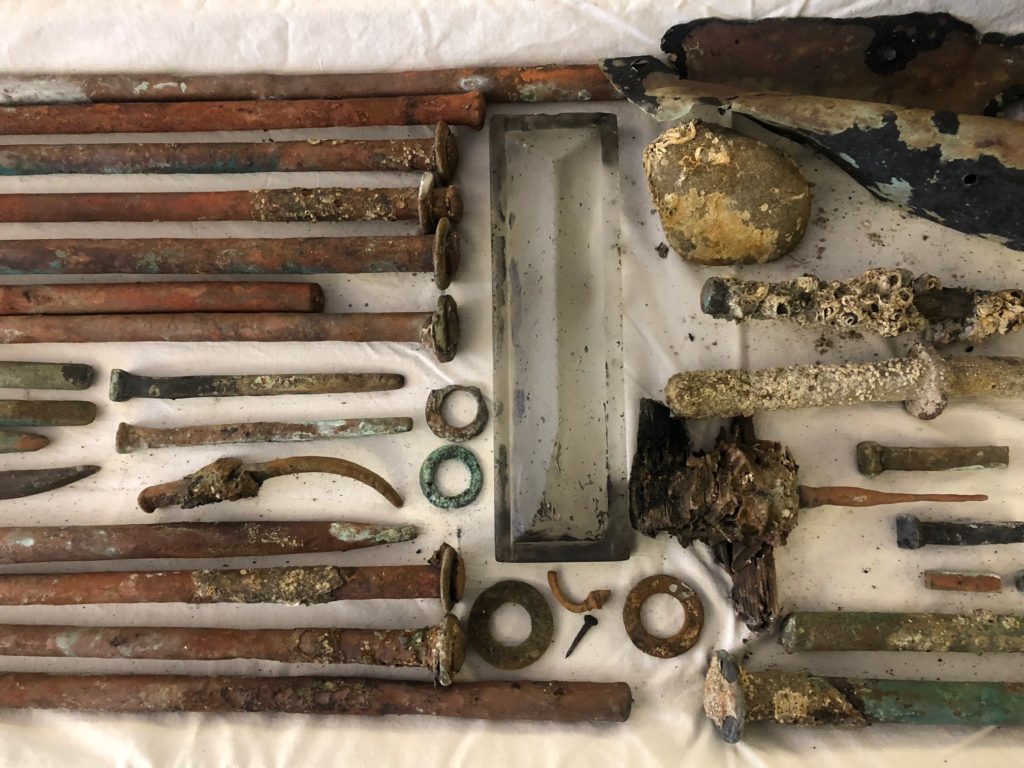 A rare glass deck prism sits in the middle of numerous copper alloy ship fastenings. Prisms were mounted in the deck and were thick enough to walk on. Much like a modern skylight, they enabled light to enter and spread into areas below deck.

They ranged from lengths of fine gold chain to pieces of ormolu, which is gold leaf over bronze and was used to decorate everything from mantle clocks, to candelabra and furniture. From an 1850s shipwreck, we recovered a rare glass deck prism, which was used to let sunlight into the areas below deck. While we still have a tremendous amount of work to do on that wreck, many of the finds made so far are very exciting, unique and valuable. We also found lots of brass spikes and large pins, which had once fastened the wooden hull and timbers of that ship together. That wreck has been tentatively identified, and when its name, ownership, and history is finally released, I expect it to make international news. 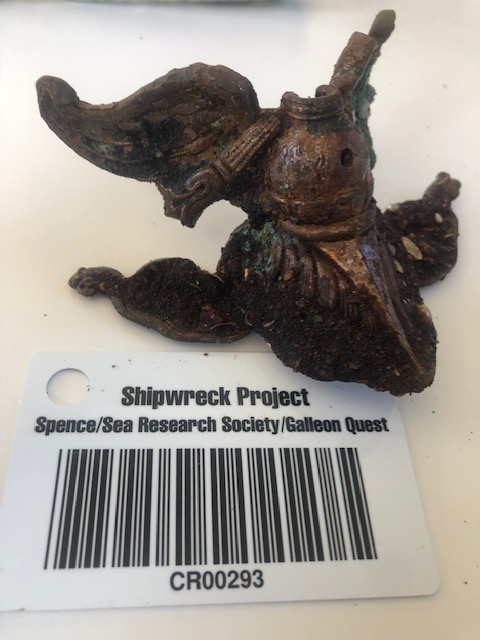 This unusual looking artifact is made of gold leafed bronze (known as ormolu) and may have have been used to decorate a mantle clock or candelabra. A number of interesting pieces of ormolu have been found on the wreck and were probably part of a consignment destined to a jeweler.

I quickly realized that there was far more work than could be accomplished by just one boat. So, with Galleon Quest’s advance approval, I entered into an agreement with Dan Porter’s company, Maritime Research and Recovery LLC. Dan brought up the research vessel Seatrepid manned by Captain Levin Shavers, Rob Hill, and Missy Parker. Dan and I have both been working with them. 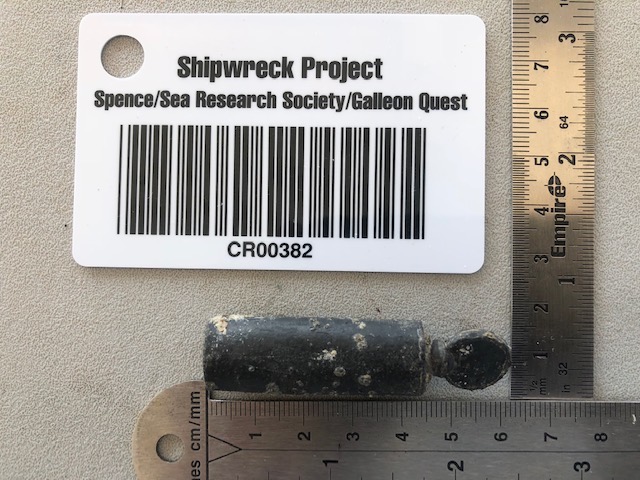 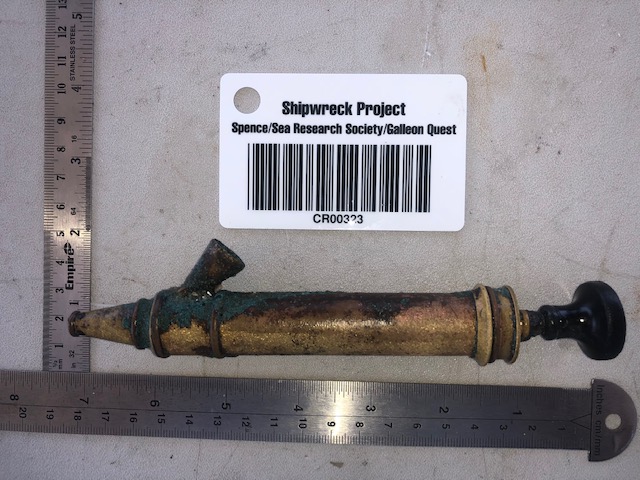 To date, most of the work done with the R/V Seatrepid has been on my late 1790s wreck. Working from the Seatrepid, we have recovered numerous bronze crucifixes in several different sizes and designs; brass thimbles, some of which were apparently gold plated and others silver plated; Cannon balls; muskets balls; musket parts; an intact brass syringe and a still stoppered pewter medicinal vial used for treating STDs; pewter plates and spoons; and an extremely rare, “Lover’s Eye” gold locket with almost iridescent black pearls, just to name some of the more interesting artifacts. 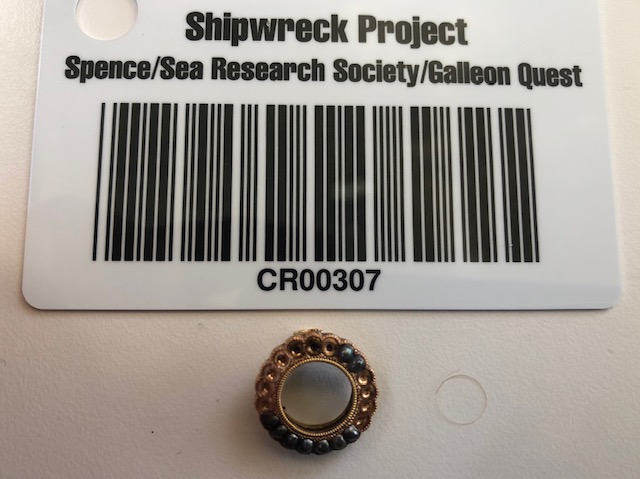 This small “Lover’s Eye” gold locket, decorated with tiny, but beautiful, almost irridescent black pearls. These lockets are extremely rare and fakes are often offered for sale for thousands of dollars. Follow this link to read of the interesting history behind these rare and valuable lockets. https://everipedia.org/wiki/Eye_miniature/

Although we have been focusing on these wrecks first, we are not ignoring the numerous additional wrecks of historic and monetary value that I have the rights to around the shoal. We are already mapping the artifact scatter from some of those other wrecks, which will help us decide which ones to target next. In the mean time, I am extremely pleased with what is coming up. 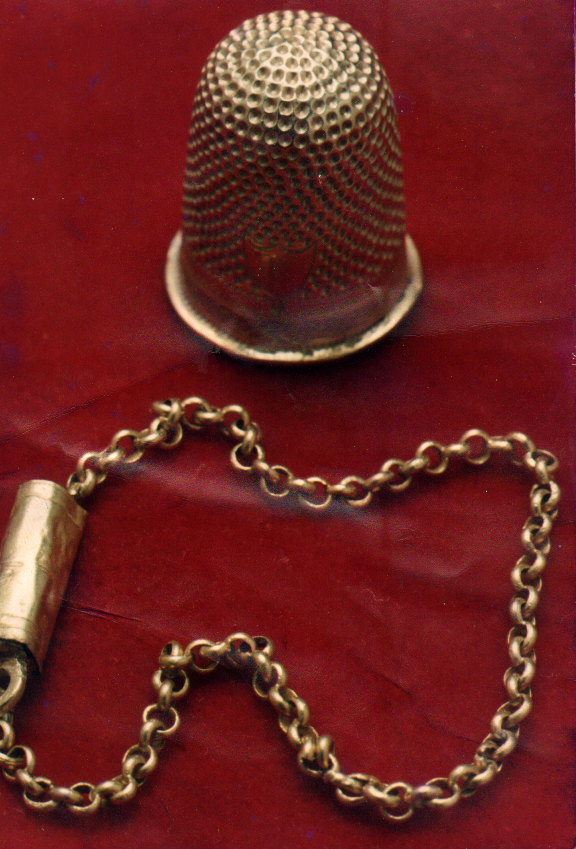 In the 18th and 19th Centuries, brass, silver and gold thimbles were considered suitable gifts for lovers, wives, and daughters alike. They came in many beautiful designs and sizes. Some ladies undoubtedly prized them and both saw and used collections of gold thimbles as status symbols.

ADDENDUM: The numerous brass thimbles we have found are an exciting find because, in one of my company’s dives prior to getting involved with Galleon Quest, we had found a single gold thimble (shown above) that I was convinced was part of a cargo bound to a jeweler. I had once read an early advertisement by a jeweler offering thousands of brass, silver and gold thimbles for sale that had just arrived aboard a ship. I believe the many brass thimbles we have been finding support my conclusion that the gold one we found was just one of many that the ship carried.

My research on the wrecks lost around the shoal includes an account of one carrying a “considerable sum of money.” Another vessel, which I have positively identified, was the SS Ozama, which had been involved in smuggling and had previously carried extremely large amounts of money. Still others had rich and valuable cargos. So, I am excited to finally be properly investigating the wrecks that I have already found.