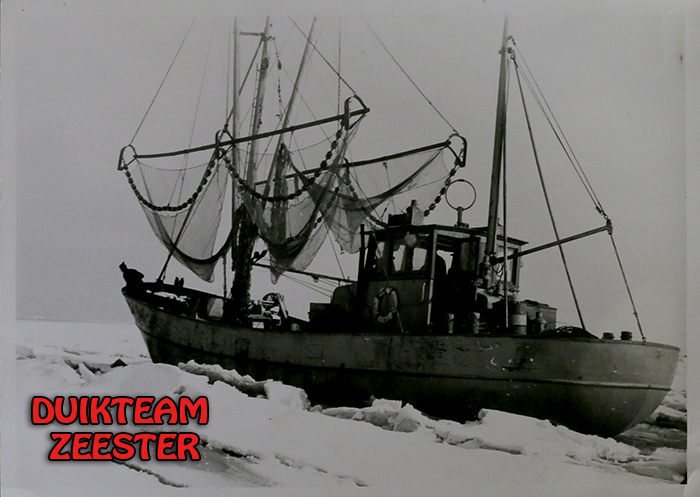 Mrs. Wilma Landman lost her husband, Jakob Vos, in 1967 during one of the most severe gales to ever hit the shores of the North Sea. While expecting to find another vessel, wreck divers from Lauwersoog in the Netherlands identified the remains of Vos’ fishing vessel, the TM 1, which was from the tiny, Dutch fishing village of Termunterzijl. It was an extraordinary and meaningful find for the divers, but even more so for Mrs. Landman. 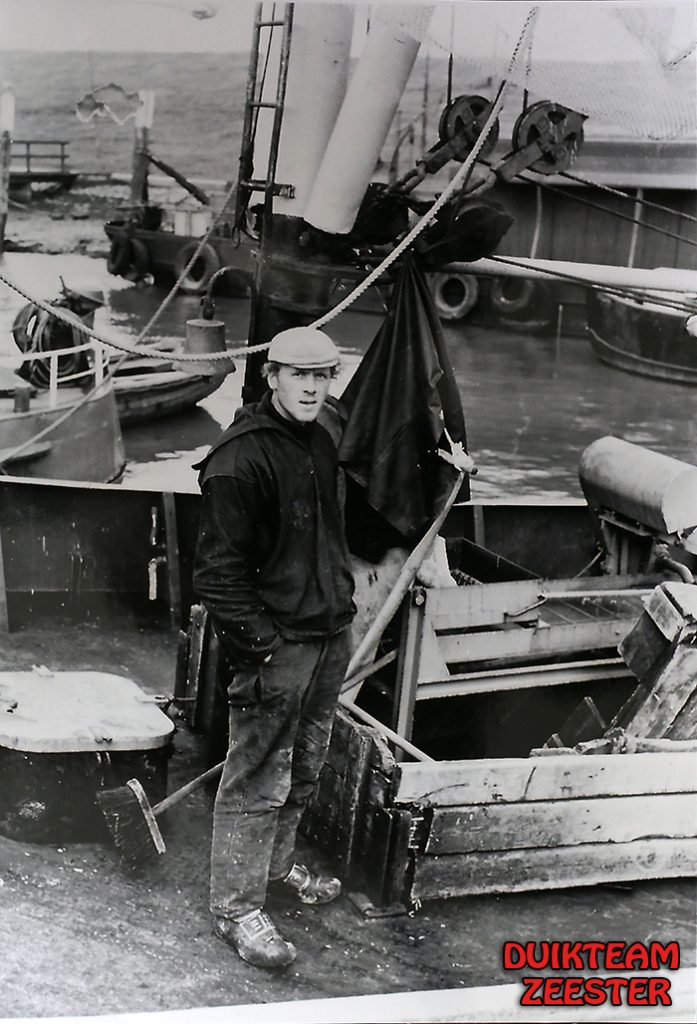 Near the German island Heligoland the TM 1 has become rudderless and is at the mercy of the wild sea. The German rescue ship Adolph Bermpohl heads to Vos and his two deckhands.

17.14 PM – 23rd of February 1967
Please repeat again, do you want to be taken of board or do you want to get towed to Heligoland?, the German rescuers shout through the VHF channel. Noise and cracking make communication difficult. Tow ••• we have ••• full of water and that needs to get out •••, they hear Jakob Vos reply. The wheelhouse has been smashed off the fishing vessel. The skipper barely manages to make himself heard.

Within half an hour the German rescuers reply that they will send a daughter ship (smaller rescue vessel) to the Burgemeester van Kampen. The smaller boat will pick up the men and return to the safe haven of Heligoland . In the meantime it has become almost dark. Be careful and put on a lifejacket, emphasizes one of the rescuers to the fishermen.

17th of June 2016
Wilma Landman (now 71) looks at the book of the German coast guard. In her living room in Termunterzijl her eyes glance at the transcript of the dialogue between the German rescuers and her husband Jakob Vos. She has read it many times before. What exactly happened will for always be a mystery. What she does know is that it was that February night that her Jakob forever stayed off shore of the Dutch dike. 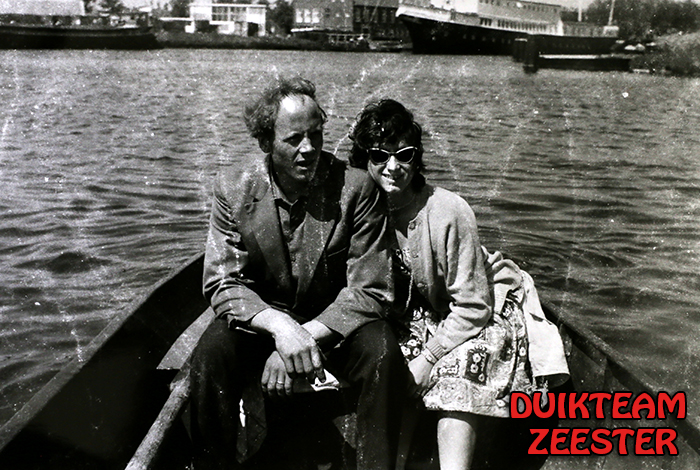 Jakob and Wilma met when she was just 16. Jakob was 22 at that time. It was love at first sight, even though Wilma does really not believe in that. Their mutual love of water was what brought the two together. Wilma, the daughter of charter sailors, Jakob a fisherman at heart. Humour, willpower, courage, that’s what they recognized in each other the first time they met at the port of Termunterzijl. Jakob was at work on his shrimper TM 1.

He was a tall boy, Mrs. Landman says, Long and muscular. I found him extremely tough. And those eyes: they looked right through me. I was crazy about him straight away. My stomach turned. I was in love when I saw him. Cupid also struck Jakob. That night he told his mother that he had met a girl, Wilma.

Jakob and Wilma were kidding around a lot, but could also be serious. Like when they talked about the future, about children. Jakob sometimes said that we should not have children, Mrs. Landman recalled, He always had a strong feeling that he would not grow old. He said that I would have to raise my children alone. I did not believe him. I was young , and you discard things like that.

5.15 AM – 2nd of August 2015
Skipper Klaas Koch sets course towards Heligoland. On board seven enthusiastic wreck divers. The diving vessel Zeester is on expedition and the men are on their way to a wreck that they had mapped a year earlier. They are looking for the wreck of the WR 6, which already has been on the seabed for about half a century. The wreck is near Heligoland, a German archipelago in the North Sea.

Once at their destination the men put on their diving gear. One by one they let themselves fall overboard. They soon see the wrecked fishing vessel – at about fifteen meters (49 feet) deep – partially buried in the sand. Sticking out from the hold are plastic fish boxes. The vessel is weather-beaten, only the skeleton of the vessel is left. In the passing decades, marine life has completely taken over the ship. There is only one way to find out if this wreck is actually the WR 6, and that’s to carefully clear away the marine growth on the bow to read the welded letters.

Two divers are knocking with hammers on the encrusted bow. Slowly a “T” appears, then also an “M.” The wreck is not the WR 6, but the TM 1 from Termunterzijl. Diver Remy Luttik begins an investigation into the story behind the fishing vessel.

17th of June 2016
Almost a year later, Mr. Luttik sits at the table at Wilma Landman in Termunterzijl. Her photo albums with black and white photos are displayed on the table. After the third cup of coffee, he clears his throat . Wilma, he says, When we dived Jakob’s wreck, we brought something up with us. Landman pays close attention. The diver then gives her a plastic bag with something heavy in it. She peeks in the bag. She gasps. Gently she picks up the horn of a VHF radio set that is in it. She holds the horn in her hands as if it were a newborn baby.

It is almost fifty years since Wilma Landman saw the horn for the last time, but she recognizes it immediately. The microphone is weather beaten, has brown rust spots and is heavy because of the sand that washed in through the holes. A wistful smile appears on her face. For some people this would be old stuff, she says. But for me this means a lot.

After half a century she finally has something tangible in her hands of the shrimper TM 1 in which her husband Jakob Vos sailed. Diving team Zeester from Lauwersoog had saved the radio’s microphone from the seabed. Now it is back home. Remy Luttik gets a thankful kiss on his cheek from Mrs. Landman.

00.00 PM – 19th of February 1967
Wilma gives Jakob a playful shove. Wake up Jakob , it’s time. It is around midnight. Wilma sees the reddish hair of Jakob sticking out of the duvet. She gets out of bed and puts the coffee on. Every Sunday she gets up with Jakob to drink a cup of coffee before he leaves for sea again. They chat a bit, joke around and then say their goodbyes. 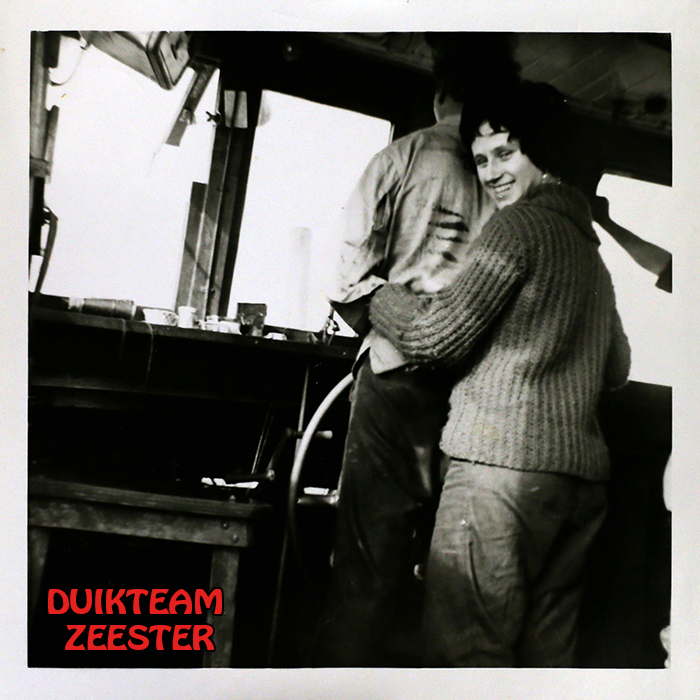 Jakob is sailing out that February Sunday night in 1967. Wilma knows Jakob will do his upmost best to fill the containers with shrimp as quickly as possible so he can steam back to Termunterzijl.

Six weeks before his final departure Jakob stayed ashore for quite some time. Wilma could give birth to her second son at any time now. Jakob wants to be there. Because the ship is still docked, Jakob does some chores. He installs a second VHF radio below deck. It was just in case the wheelhouse would come off during a storm.

If Jakob had not mounted that VHF radio, he never could have made his MayDay alarm during that terrible evening in 1967. 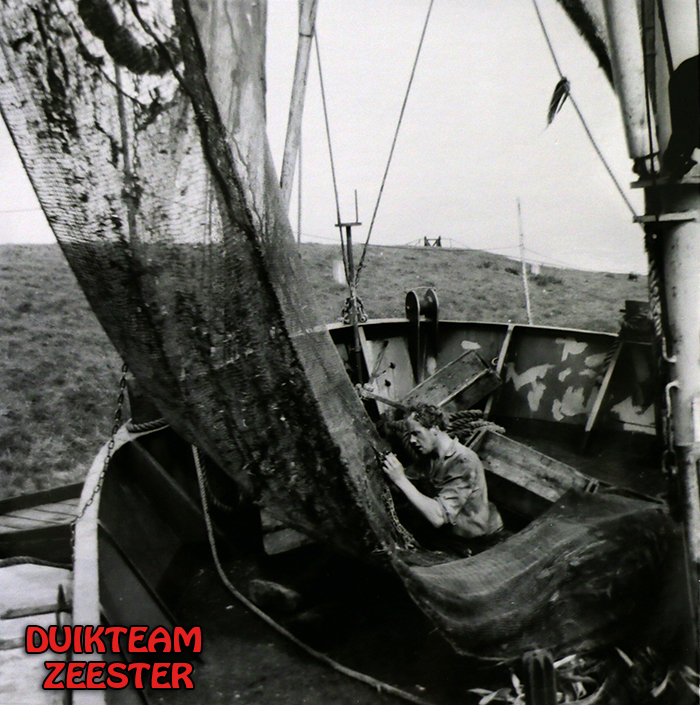 Thursday the 23rd of February 1967
Little Jakob (6 weeks old) cries all day. He is inconsolable for some reason. Also the two-year-old Kobus cries incessantly. There’s something in the air. Wilma has got a bad feeling. She is restless. Normally Wilma listens with half an ear to the fishing frequency on the radio. Not this time. Wilma’s sister Mia comes over for coffee. Wilma has to speak out. I will not see my Jakob again, she says. Mia frowns in return. Did you drink, she responds. Wilma shakes her head no.

That evening Wilma is startled by loud knocking on her door. It’s her father-in-law. The ship is lost, he says, but the boys are on a rescue ship. Wilma is surprised. They might be saved, but she is not convinced. Wilma wants nothing more than to leave for Heligoland to fetch Jakob and the two deckhands Schelto Westerhuis and Rommert Bijma and bring them home. But she will not leave before she has heard Jakob’s voice. She waits for his call, which does not come.

That night Wilma hardly sleeps. Sometimes she dozes off and then startles awake. The minutes crawl past.

Mrs. Landman has gone to a softer tone. While she is her cheerful self during the rest of the conversation, she noticeably has difficulty talking about her grief. I could not move. The only thing I did was light one cigarette after another and hope.

After two weeks his body is found on a beach near Esbjerg, Denmark. One day before Wilma turns 22, she sees Jakob’s ghost-white coffin lowered into the earth. She still didn’t know exactly had taken place in the sea near Heligoland that fatal evening. The details she will never know exactly. I wonder if Jakob has thought of us before he was overcome by the cold?

After half a century she finally knows a little more of what happened. The three fishermen were taken of board by the daughter ship of the Adolph Bermpohl. Due to hurricane winds and wild seas the small ship could not be hoisted back on board the larger vessel. The rescuers decided to sail with the small ship in the lee of the big ship back to the port of Heligoland. 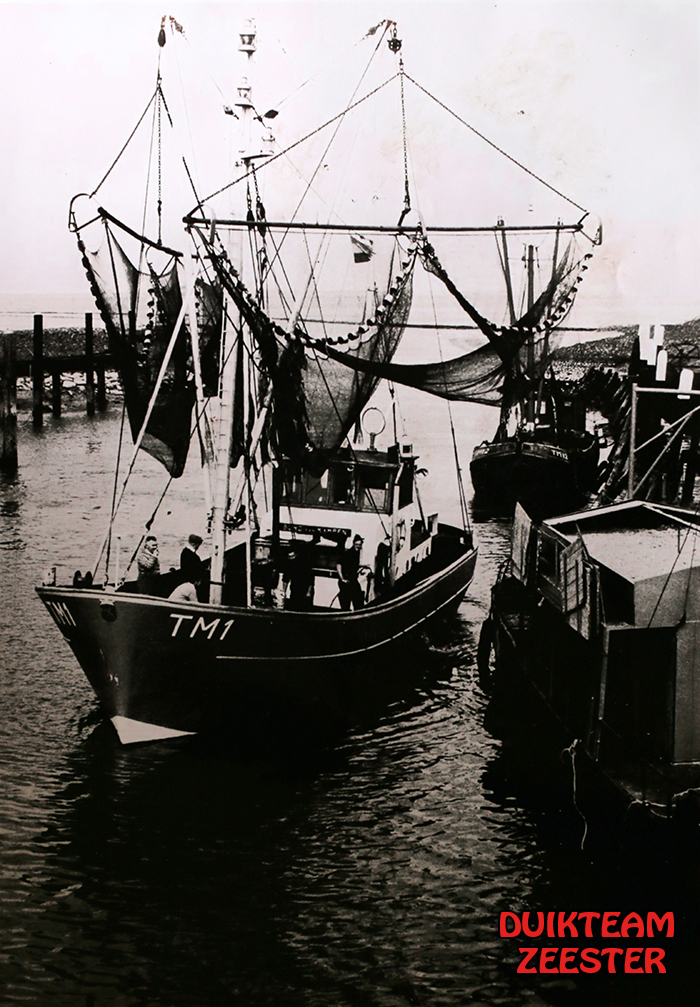 18:45 PM – 23rd of February 1967
The lighthouse keeper at the north entrance of the harbor’s mouth at Heligoland saw two white lights in the distance. Probably the mast lights of the rescue and daughter ship. He is not really sure, the poor visibility does not make it any easier. Fifteen minutes later the lights have disappeared.

After 19:00 there was no further radio contact with the Adolph Bermpohl. On their way back, with the fishermen from Termunterzijl on board, the small rescue vessel lost. Its probable that the vessel was struck by a groundswell, a broad deep swell of the sea. Like the fishing vessel, the rescue vessel disappeared into the dark wild water. The four German rescuers and the three fishermen did not survive. 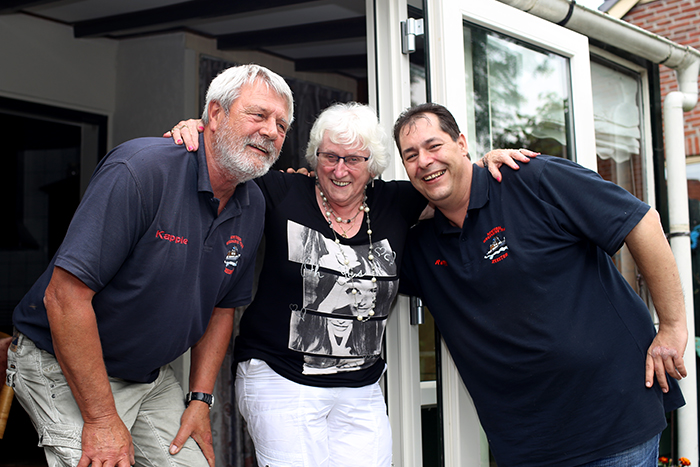 17th of June 2016
Mrs. Landman looks at the microphone. It’s on display at a treasured place. A valuable still life. The longing for Jakob stays forever. People sometimes say: ‘It is fifty years ago.’ But it’s part of my life. She moves sitting up straight. There is that smile again. I really think that I have found my way in life again nicely. She married a second husband, Dikkie. With him she had a third son, Henk.

During their relationship there was always room to talk about Jakob. Jakob and Dikkie knew each other in the old days.

She talks a lot about Jakob. With her sons, with friends. And lately also with the wreck divers. The divers not only brought back the microphone to Mrs. Landman, but also the spirit of Jakob himself. I have the idea that he’s back for now.

Read the article on duikteamzeester.nl in Dutch: TM 1 BURGEMEESTER VAN KAMPEN IN DVHN

This story was provided courtesy of Remy Luttik