Who Owns The Shipwrecks?

Or, do the heirs, insurers, discoverers or salvors? Click here to read an opinion piece by Dr. E. Lee Spence. 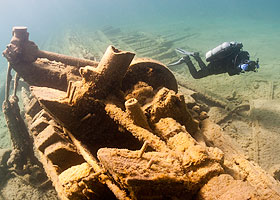 Michigan shipwrecks were in the news as Governor Rick Snyder donned scuba gear August 20, 2013, to explore the wreck of the steam barge Monohansett in Thunder Bay National Marine Sanctuary and Underwater Preserve.

The governor made his dive as part of the State’s “Pure Michigan” tourism campaign. The campaign was originally launched in 2006 by the state of Michigan featuring the voice of actor and comedian Tim Allen.

Some of the many vessels shipwrecked on April 3 were a French brig near St. Simons Island, Georgia, in 1803, and an Italian destroyer in the Red Sea and a Finnish freighter south of Iceland in 1941. If you are seeing this in a post, other than on Shipwrecks.com, read more about these wrecks and other ships lost on an April 3 at http://shipwrecks.com/shipwrecks-of-april-3/.

Today’s Shipwrecks™
for April 3
compiled and edited by ...

Wreck of the SS City of Vera Cruz

Lost in 1880, while carrying a large quantity of valuable jewelry, the wreck of the SS City of Vera Cruz is 13  miles off Cape Canaveral.

How long should a shipwreck discovery be ignored while hoping for new technology?

I have been discovering shipwrecks for over 50 years. My first major discovery was that of the wreck of the Civil War steamer ...

The steamer United States was shipwrecked in the Atlantic Ocean off Cape Romain, South Carolina in 1881. Built in Connecticut in 1864, she was the finest ship constructed by one of America’s foremost shipyards. The shipwreck was discovered and identified by underwater archaeologist Dr. E. Lee Spence. In 2012, the Federal District Court ruled that Spence was the “true and exclusive owner of the abandoned wreckage.”