Some of the many vessels shipwrecked on April 3 were a French brig near St. Simons Island, Georgia, in 1803, and an Italian destroyer in the Red Sea and a Finnish freighter south of Iceland in 1941. If you are seeing this in a post, other than on Shipwrecks.com, read more about these wrecks and other ships lost on an April 3 at http://shipwrecks.com/shipwrecks-of-april-3/.

1731: On April 3, 1731, a merchant sloop, bound from Charleston, South Carolina, to Providence and St. Christophers, was lost on the “North Breaker Head” of the Charleston Bar while attempting to follow His British Majesty’s ship Alborough through the breakers. The sloop’s people saved themselves in her boat.

1803: The brig Maringo, Captain Joseph Nicalau, laden with mahogany and bound from St. Domingo “under French Coulers” was cast away on the Pelican Bank near Little St. Simons Island, Georgia, on January 10, 1803. [Note: Reuben King (a tanner by trade) salvaged some spikes; blocks; mahogany; iron; and lead, from the wreck under a contract with the captain and the mate. He had found part of the wreckage on Wolf Island, Georgia. On April 3, 1803, Reuben King, sold his “wright (sic) and Claim of the Cargo and wreck belonging to the Brig Morin” for $300.]

1807: The schooner Katy, Captain Long, bound from Charleston, South Carolina, for Africa, having sprung a leak, was run ashore on Stone’s Breakers (a part of the Charleston Bar) during the night of April 3, 1807, and went entirely to pieces. The captain and crew were rescued by one of the pilot boats.

1829: The packet Myrtle was lost “at Ragged Island” on her passage from Bermuda to Halifax on April 3, 1829 “all hands were saved.” The Myrtle’s surgeon carried the mails to Halifax where they were turned over to the HMS Tyne, which carried them to England. (Note by ELS: There are several “Ragged Islands” but because of her destination, this loss probably took place at Ragged Island, Canada.)

1839: On April 3, 1839, a schooner of about 40 tons burden was anchored off White Point in Charleston Harbor, South Carolina, and was blown up with 75 pounds of gunpowder, as part of the demonstration by “Messrs. Taylor and Goodyear.” (Note: Charles Goodyear is famous for his development in 1839 of a process for the vulcanization of rubber. Unfortunately, his patents were infringed upon by others and he ultimately died a poor man after spending much of his later years in debtors’ prisons. Goodyear had no affiliation with the present rubber company which bears his name.)

Captain Taylor, an agent for the Submarine Armour Company, had “in his charge one of the suits of armor intended for descending to the depths of the ocean.” It was described as a “water proof casing of block tin, ensconced within which, and supplied with air from above through an elastic tube of coiled wire coated with Indian rubber.” It was said that the “armor” could enable a man to stay underwater for an hour. The Submarine Armour Company was chartered in New York in 1839 with the object of “rescuing from the vasty deep, the treasures which it has in all past time, swallowed up with an inordinate appetite, not to be satiated.”

1843: The British ship China, Captain A. Philips (or Phillips), bound from Liverpool for Charleston, crossed the Charleston Bar on April 3, 1843, and was forced to anchor owing to the ship missing stays. Shortly after, she parted her anchor chains and drove ashore on Folly Breakers, Folly Island, South Carolina, and bilged. She carried a cargo of salt and a few packages of merchandise, consigned to J.B. Clough & Son. A large portion of her sails, blocks, rigging, etc., was saved and taken aboard the United States Revenue Service cutter Van Buren, which had immediately gone to the China’s assistance. Part of her cargo of salt was saved by the sloop V. Barkelew.

The China was 618 tons and was built of black birch, pine, oak and spruce at New Brunswick in 1835. In 1839 she underwent “large repairs” and was sheathed with “yellow metal.” She was owned by J. Johnson.

1865: The C.S.S. Hampton, Commander J.S. Maury, was burned by the Confederates in the James River, near Fort Darling, Virginia, on April 3 (or 4), 1865, in preparation of the abandonment of Richmond.

1865: The C.S.S. Roanoke (or Roanoake, ex-tugboat Raleigh) was blown up and burned near Fort Darling by the Confederates at the evacuation of Richmond, Virginia, on April 3 (or 4), 1865, to prevent her from falling into Federal hands.

She had an iron hull and was a screw steamer of 65 tons. She was rigged as a tug and was fitted with one or two guns, at least one being a pivot 6-inch rifle forward. She may have been fitted with a torpedo pole, “with a socket and long jaws, in the same manner as they are fitted • • • on the small torpedo boats.” The steamer had been purchased at Norfolk in 1861. 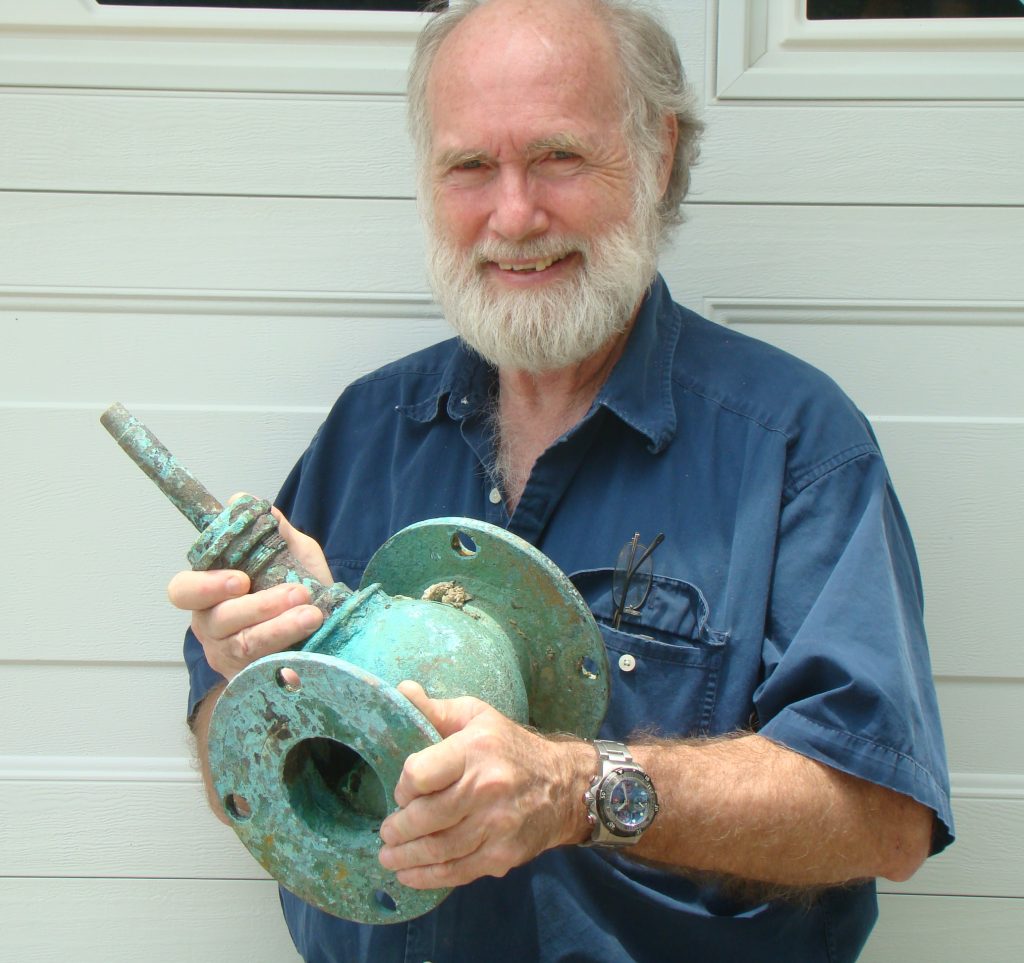 1881: The SS United States, was launched in 1864 and was lost off Cape Romain, South Carolina, in 1881. She was the most expensive steamer built by the famed American shipbuilding firm of S. Gildersleeve & Son, which built 120 vessels. She was named for her country and sported the United States’ national symbol, an American eagle, as her figurehead. (Note by ELS: We located a wreck of her general description on one of my search expeditions to Cape Romain, but weren’t sure what vessel it was or what it might have on it, so we did little except pick up a few brass spikes. In 2012, I filed an admiralty claim against the wreckage and was officially declared the “true and exclusive owner.” In June of 2013, after doing considerable research and taking into consideration her length, materials, type of engine, type of wood, fastenings, sheathing, etc. I finally concluded that the wreckage had to be that of the SS United States. To read more about this steamer see “Discovery of the SS United States wrecked in 1881.“)

1941: On April 3, 1941, the Italian destroyer Battisti broke down in the Red Sea, while en route from Massawa, Eritrea, to attack British facilities at Port Sudan, Sudan, and was scuttled. The 4 other destroyers in convoy with her were spotted by British reconnaissance aircraft and Swordfish bombers launched from the British carrier Eagle quickly attacked, sinking the destroyers Daniele Manin and Nazario Sauro. The two remaining destroyers, Pantera and Tigre, crossed the Red Sea and were scuttled near the Arabian coast.

1942: The American passenger-freighter Otho, which took on cargo, including 750 tons of tin ingots and 4,400 tons of manganese ore, at ports in Africa, was torpedoed and sunk shortly before noon on April 3, 1942, by the 500 ton German submarine U-754. There is also evidence that she carried a shipment of gold bullion and gold coins from French reserves hidden away in western Africa at the outbreak of the war.  The sinking was described as in latitude 36°25’ north, longitude 71°57’ west, and as about 200 miles east of Cape Henry, Virginia.

The Otho carried 38 regular officers and crew, 10 navy seamen (as armed guards and gun crew) and 6 passengers. All of them safely abandoned ship. Of these, 12 of the regular crew, 1 navy seaman, and 3 passengers were rescued on April 8, 1942, by the USS Zircon in latitude 39°10′ north, longitude 73°30′ west. Seventeen days after that, 1 crewman and 5 armed guards in a raft were picked up by the Norwegian motor tanker Gallia about 150 miles west of Bermuda. When found, the survivors were too exhausted to move. One of the armed guards died within an hour of being picked up. None of the others, including her master, were ever found.

1942: Some of the other vessels that were lost on April 3, 1942 included: the British freighter Glenshiel, with 1000 tons of general cargo, which was torpedoed in the Indian Ocean 500 miles south of India by Japanese submarine I-7; the Soviet destroyer Shaumian, which ran aground off Gelendzhik on the Eastern shore of the Black Sea; the Norwegian vessel Aust, which was stopped with shellfire and sunk in the South Atlantic by the German raider Thor; the American SS West Irmo, which was sunk by the German submarine U-505 200 miles off Ivory Coast, West Africa; the Polish screw steamer Tobruk and British steamers New Westminster City and Empire Starlight, which were sunk by German bombers in the harbor at Murmansk; and the German submarine U-702, with a crew of 44, which went missing in the North Sea 100 miles off Norwegian coast.

NOTE: This is by no means meant to be a complete list of the vessels lost on April 3, as there have been thousands of ships lost for every day of the year. All of the above entries have been edited (shortened) come from various editions of Spence’s List™. The original lists usually give additional data and sources. Those lists are being updated and are or will be made available for a fee elsewhere on this site.