Have you ever heard of lead silver bullion? It is sometimes called base bullion and is one step in the refining process of first concentrating then removing silver that has been mined with lead. The percentage of silver in base bullion can be as low as 1 or 2 percent but can be well over 50%. Thirteen thousand bars of it went down in the SS Ballarat in 1917. If you are seeing this in a post, other than on Shipwrecks.com, read more about these wrecks and other ships lost on an April 25 at http://shipwrecks.com/shipwrecks-of-april-25/.

1765: The vessel Medway Planter, Captain Lislie, bound from Jamaica to London, “was lost on a reef of rocks near Cat Island” in the Bahamas on April 25, 1765. The captain and crew were reported safe and “arrived at Providence.”

1815: The ship Manchester Packet, Captain P.T. Coffin, was reported ashore on Tybee Island, Georgia, on April 25, 1815, and was expected to be lost.

The Manchester Packet was built in 1806 in New York and was 229 tons. She had two decks, a 14′ draft, and was sharp aft. She was built with live oak and cedar, and had pitch pine sides. The copper bolted ship was sheathed and coppered in 1807 and was classed A-1 by Lloyd’s. She was owned by Captain Coffin and Company.

1819: The Mercury, Captain Maxton, which had gone on shore “to the east of the Island of Fortune, on the Crooked Island Reef,” on April 25, 1819, saw a large brig with yellow sides, on shore and supposed bilged, about a half mile distant.

1841: The British vessel Caledonia, Captain Ainsworth, bound from Llanelly, was wrecked in the “B. Channel” on April 25, 1841. Note by ELS: “B. Channel” could could refer to the Bahama Channel, but because Llanelly is in Wales, and no port of destination was given, I suspect it stood for British Channel.

1845: HMS Skylark, 10 guns, commanded by Lieutenant George Morris, was wrecked on the Kimmeridge Ledge about 5 miles east of Lulworth Cove on the Dorset coast in south west England on April 25, 1845.

The Skylark was launched at the Royal Navy Yard at Pembroke, Wales, on May 6, 1826. She was a Cherokee-class brig-sloop, which when used as war vessels were armed with two 6-pounder guns in her bow and eight 18-pounder carronades. When used for survey purposes these vessels typically had six guns. But, either way, she would have had a total of 74 or 75 men. The vessel was 90 feet on her gun deck and 24 feet 6 inches in breadth. Note by ELS: At least one source lists the Skylark as having just four guns, which may indicate she was on a survey or scientific mission when lost.

1855: The ship Pauline, of Bath, Captain Colburn, bound from Philadelphia for Havana, went ashore on Elbow Cay in the Bahamas on April 25, 1855, and was totally lost. Her cargo was sold as it lay. Captain Colburn, officers and crew arrived at the port of New York in the bark Stanley from Nassau on May 15.

1856: The sidewheel steamer Thomas G. Haight, Captain J.W. Barkman, caught fire at Miller’s Wharf at Savannah, Georgia, on April 25, 1856. She was cut loose from the wharf and drifted with the tide and grounded on Fig Island, Georgia, opposite Mr. Willink’s shipyard. Her upper works were all burned. No lives were lost and the origin of the fire was unknown. 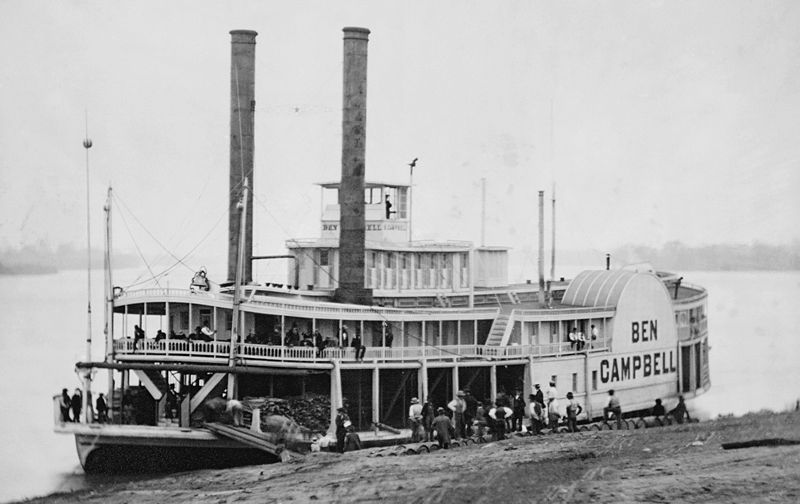 1862: On April 25, 1862, an unidentified brig was burned in the Riceborough River to prevent her from falling into the hands of the Federal forces who had gone up the river in the USS Potomska and the USS Wamsutta to capture her. It was thought that the brig had entered the river by running through Doboy or Sapelo Sound, Georgia.

1863: About April 25, 1863, the blockade running sloop Eagle, Captain Brenon, laden with upland cotton, tobacco, etc., bound from Savannah to Nassau, was spotted while passing Cabbage Island, Georgia. The Yankee signal corps sent up rockets and thereby alerted the blockade fleet. A three masted “Yankee gunboat” chased the Eagle ashore two miles inside of Warsaw Sound, Georgia. The Eagle’s crew took what personal effects they could, and, before abandoning her, scuttled her and set her afire “to prevent her capture by the blockaders.” She was owned by Mr. Marcus Cohen of Savannah and Mr. A.M. Cohen of Waresboro and, including her cargo, was valued at $5,000.

1897: The schooner Alexandra dragged anchor and stranded on the northwest side of Aiktalalik Island, Alaska, in a northwest gale on April 25, 1897. (Note: One source gives the date as December 22, 1897, and describes the location as on the “NW. side of Goose Island, Geese Islands.”)

1916: The British Royal Navy submarine E22 was torpedoed and sunk on April 25, 1916, by Imperial German submarine UB-18 in the North Sea off Great Yarmouth, Norfolk, United Kingdom, with the loss of all but two of her crew of thirty. The two survivors were ERA F.S. Buckingham and Signalman William Harrod, who were picked up and taken prisoner by the U-Boat.

HMS E22 was a British E class submarine built by Vickers, Barrow-in-Furness. She was laid down on 27 August 1914 and was commissioned on 8 November 1915. Like all post-E8 British E-class submarines, E22 had a displacement of 730 short tons at the surface and 890 short tons while submerged. She had a total length of 180 feet. and a beam length of 22 feet 8.5 inches. She was powered by two 800 horsepower Vickers eight-cylinder two-stroke diesel engines and two 420 horsepower electric motors. The submarine had a maximum surface speed of 16 knots and a submerged speed of 10 knots. British E-class submarines had fuel capacities of 55 short tons of diesel and ranges of 3,255 miles when travelling at 10 knots. She was capable of operating submerged for five hours when travelling at 5 knots. Her maximum design depth was 100 feet although in service some reached depths of below 200 feet. E22 was armed with five 18-inch diameter torpedo tubes, two in the bow, one either side amidships, and one in the stern. She carried a total of 10 torpedoes.

The day before her loss, E22 had been involved in experiments in the North Sea to intercept German Zeppelins. E22 carried two Sopwith Schneider seaplane scouts on her casing. The sub would then submerge in calm waters and the planes would float on the surface. They would then take off and then return to the East coast of England in Felixstowe. The trials were not repeated.

1917: HM Ambulance Transport Ballarat (A70), bound from Melbourne, Australia, for London, with Australian troops, was torpedoed on April 25, 1917 twenty-four nautical miles south by west of the Wolf Rock, Land’s End, Cornwall, United Kingdom, by the Type UB II German submarine UB-32, commanded by Captain Vieberg. The steamer Ballarat didn’t immediately sink and an attempt was made to save her but she sank under tow. Her crew was saved.

She was carrying a valuable cargo that included 7,828 copper ingots, 1,415 boxes of copper bands, 2,645 bags of antimony ore, and 13,000 ingots of lead silver bullion. At least one source says she carried gold bullion. The latter was probably stowed in a her bullion room, which was a specially designated compartment located just forward of her forward cargo boom. The fact that she didn’t immediately sink is evidence that despite being torpedoed she was fairly intact (she was struck near her stern), so her bullion room was probably untouched by the blast. Note by ELS: Lead silver bullion, sometimes called base bullion, is one step in the refining process of first concentrating then removing silver from lead. The percentage of silver in the lead can be as low as 1 or 2 percent but can be well over 50%.

The Ballarat, 11,120 gross tons, had twin quadruple expansion steam engines of 1,200 nominal horsepower. She was built in 1911 by J. Caird & Company, Greenock, Scotland, as a passenger liner with refrigerated cargo holds, in 1911, and was 515 feet in length, 62 feet 6 inches in breadth, and 42 feet in depth of hull. The images of two postcards showing this steamer may be found on the Simplon Postcard Company’s website, which offers copies for sale.

1918: HMS Bombala, a British Q-Ship (covert submarine hunter) operating under the name ss Willow Branch, and carrying stores between Gibraltar and Sierra Leone, was sunk on April 25, 1918 in latitude 20°52′ north, longitude 17°36′ west northeast of the Cape Verde Islands, near Cape Blanco (Ras Nouadhibou), Mauritania, in a gun battle with the German submarine cruisers U-153 and U-154. She was off Cape Blanco “when the two large submarines hove in sight. The U-boats expended thirty rounds before they found the range. For two and a half hours the fight waxed and waned. Finally the Willow Branch, a blazing wreck, was abandoned by her crew, numbering 53. ••• Terrible were the events that ensued in the that tropic clime. After the first day the ship’s boats became separated. The master’s boat was never seen again. The other drifted about under the blazing sun for eight days, the torments of agonizing thirst torturing the survivors. Some – 11 in all – drank sea water and went mad. On the ninth morning the 14 left made land in the estuary of the Senegal River. Two of the strongest cast about and found a tiny pool of water, and after drinking a little they tottered back to their comrades bearing the life giving fluid. it was too late, they had died. These two struggled on until the next day, then, found by friendly Arabs, they were taken to a French post.”

NOTE: This is by no means meant to be a complete list of the vessels lost on April 25, as there have been thousands of ships lost for every day of the year. All of the above entries have been edited (shortened) and come from various editions of Spence’s List™. The original lists usually give additional data and sources. Those lists are being updated and are or will be made available for a fee elsewhere on this site.