Did a safe with gold go down on the Mississippi River steamer Sultana? Probably, but unfortunately we may never know. She is barely a footnote in American history, but we do know that her destruction cost more lives than the sinking of the RMS Titanic. The mighty Mississippi later changed its path and there is evidence that the wreck is now buried under a farmer’s soybean field, two miles from the river’s present course. If you are seeing this in a post, other than on Shipwrecks.com, read more about these wrecks and other ships lost on an April 27 at http://shipwrecks.com/shipwrecks-of-april-27/.

1822: On April 27, 1822, a brig was seen on Ackland Key in the Bahamas, with her main mast gone. She had apparently got on shore during the night night.

1841: The schooner Undine, of Boston, bound from Wilmington, North Carolina, for Havana, was wrecked on Noname Cay, on the north side of Abaco, Bahamas, on April 27, 1841. The vessel and cargo were a total loss.

1842: The vessel Andrew, bound from Port-au-Prince to London, was reported as “cast away on Attwood’s Key” in the Bahamas in April of 1842.

1855: A two masted boat with nine persons aboard was capsized near the lower end of Fig Island, Georgia, in the Savannah, River, by a sudden squall on April 27, 1855. Mr. W.P. Rowland and Mr. D.P. Landershine, both of Savannah, were drowned. The rest of the people were saved by “the Ferry boat” which happened to be near.

1863: The ship Hardee, bound from Cardiff to Nassau “with coal for the rebels, ran ashore on Porkfish Rocks, about two miles from Nassau,” in the Bahamas on April 27, 1863, and was a total loss.

1863: The large English schooner Golden Liner, which had just arrived from Halifax and was still loaded with a valuable cargo of flour, brandy, sugar and coffee, was captured and burned by Federal forces from the United States steamer Monticello and the United States schooner Matthew Vassar on April 27, 1863. The destruction was variously described as carried out “at” or “inside of” Murrell’s Inlet, South Carolina. Note: One report said the schooners George Chisolm, Captain Johnston, and Antoinette, along with several others, had been destroyed, but it was later discredited as an exaggeration, and that only the “Gold Linen” had been destroyed.

1863: On April 27, 1863, the United States Navy sloop-of-war Preble took fire due to the carelessness of a crewman while anchored in Pensacola Bay, Florida. Shortly after the burning ship was abandoned, she exploded, causing her total loss. She was built in 1838/1839 at the Portsmouth Navy Yard. She was 565 tons, 117 feet 7 inches in length, 32 feet in breadth and 15 feet in depth of hull and was originally armed with sixteen 32-pounder carronades.

Drawing of the U.S. sloop-of-war Preble

In 1963, the remains of the USS Preble‘s were allegedly discovered by some Navy divers, who salvaged a number of artifacts from the wreck. In 2011 and 2012 an Underwater Archaeology Field School sponsored by the University of West Florida apparently conducted one or more field searches for the wreck, but I have found nothing to indicate that they were actually able to locate her, which also brings the original 1963 discovery into question.

1865: The overloaded steamboat Sultana was destroyed at 2:00 A.M. on the morning of April 27, 1865 when one of her boilers exploded throwing some of the passengers on deck into the water, destroying a good portion of the ship, and sinking her 7 to 9 miles north of Memphis, Tennessee. Hot coals scattered by the explosion soon turned the remaining superstructure into a roaring inferno, the glare of which could be seen in Memphis. It was the worst maritime disaster in United States history. At least 1,547 of the estimated 2,400 crew and passengers were killed, burned to death or drowned. Most of the passengers were Union soldiers, chiefly from Ohio who had just been released from Confederate prisoner of war camps. The United States government had contracted with the Sultana to transport these men back to their homes. The ship’s safe, rumored to contain gold coins, which could now be worth many millions, was not recovered.

Memorial stone for the Sultana

Although the loss of life aboard the Sultana was terrible disaster it was overshadowed in the press by other recent events. President Lincoln had been assassinated less than two weeks before and the papers were full of speculation and news about the conspirators. John Wilkes Booth, President Lincoln’s assassin, was killed the day before. (Note: Well over a half million soldiers had died in the war, but only one president, so the story of the Sultana, though tragic, may have seemed minor in comparison.) 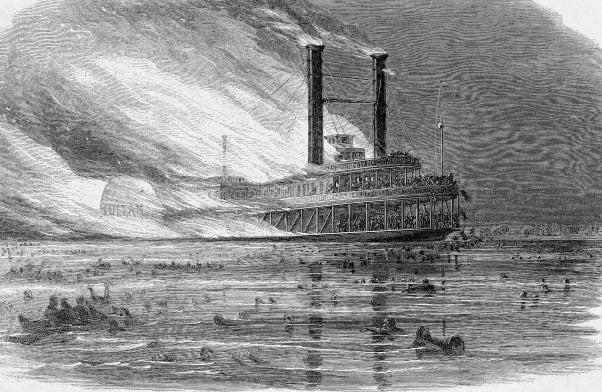 The burning of the Mississippi River steamer Sultana with the loss of 1,547 men.

A wooden paddle-wheeler the Sultana was constructed in 1863 by the John Litherbury Shipyard in Cincinnati, and intended for the lower Mississippi River cotton trade. Registering 1,719 tons, the steamer normally carried a crew of 85.

In 1982, a local archaeological expedition uncovered what may be the wreckage of Sultana. Blackened wooden deck planks and timbers were found under a soybean field on the Arkansas side of the Mississippi River, about 4 miles from Memphis. Many vessels have burned and sunk in the Mississippi, so it is no surprise that at last report a positive identification still had not been made. The river has changed its path several times since the disaster, and the main channel is now about two miles east of its 1865 course. (Note by ELS: The site was tentatively identified after Jerry Potter, a Memphis attorney who had been a history major in college, researched where he thought she had been lost and met with the property owner, Sam Oliver on his farm near Mound City, Arkansas. Oliver and his father had been finding pieces of old iron while plowing and, although not historians, had long thought they were from the Sultana.)

1943: The German submarine U-174, commanded by Wolfgang Grandefeld, was was bombed and sunk by an American Lockheed Ventura aircraft southwest of Newfoundland on April 27, 1943. Fifty-three men died; there were no survivors. The location of her sinking was also described as 345 miles southeastward from Halifax, Nova Scotia in latitude 43°35′ north, longitude 56°18′ west. She was a Type IXC U-Boat, with six torpedo tubes. She was 1,120 tons displacement when surfaced, 252 feet in length overall and 22 feet 4 inches in breadth. 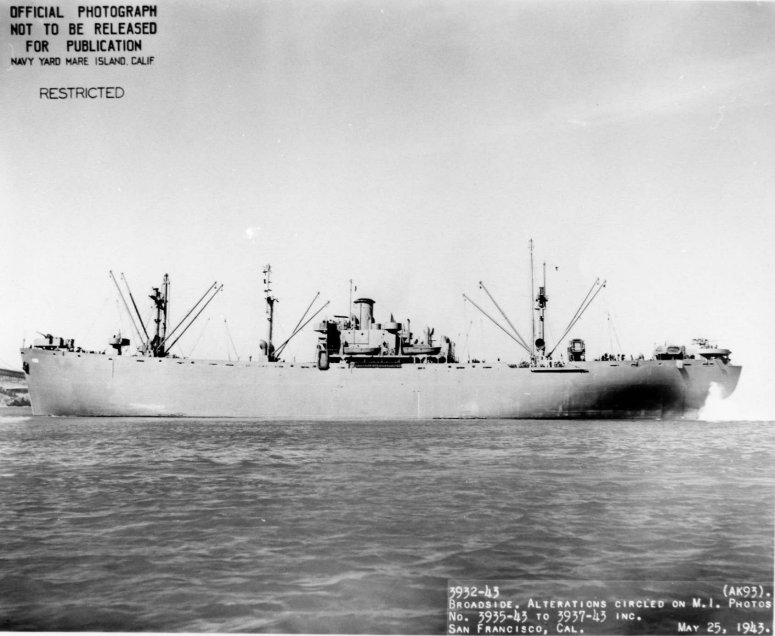 Note: Although the term “hulk” can be used to refer to an abandoned wreck or shell, it is much more commonly applied to hulls that are still performing a useful function.

1944: The German Type IXC/40 submarine struck a mine and sank on April 27, 1944, in the Baltic Sea off Swinemünde, Pomerania, with the loss of nine of her 44 crew. Salvaged in August 1944 and cannibalized for parts. She was completed in September 1943 and spent the next seven months on working up cruises in the Baltic Sea near Swinemunde in order to get the crew and boat ready for operational cruising in the Battle of the Atlantic, which was at a critical stage.

As the boat worked up on 27 April 1944, just days off its intended first cruise, she struck a sea mine in the bay and sank, nine of her crew going down with the boat, and 35 being rescued by nearby ships. The boat was salvaged in August 1944, but was too badly damaged to repair, and was broken up for components for use in other U-boats. Her surviving crew were largely transferred to other units, principally U-3009, on which they surrendered in May 1945. The mine had been air-dropped over the bay by the Royal Air Force, who had realised the use that the area was being put to through photo-reconnaissance flights. The air-dropping of mines was a frequent tactic of the RAF off German harbors.

1944: The German submarine chaser UJ 6075 was torpedoed and sunk on April 27, 1944, in the Mediterranean Sea off Toulon, Var, France, by the British submarine HMS Untiring. 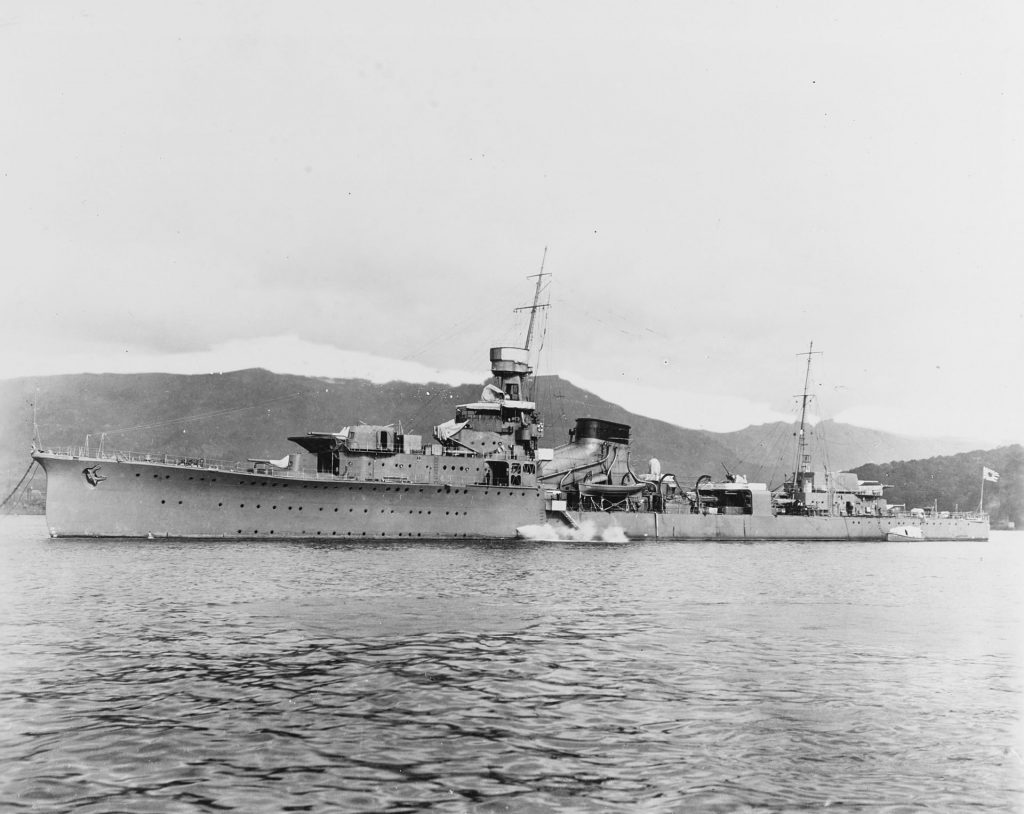 Japanese Light Cruiser Warship Yubari Taisho. Photograph from the Bureau of Ships Collection in the U.S. National Archives via Wikipedia.

1944: The Imperial Japanese light cruiser Yubari was torpedoed and damaged on April 27, 1944, in the Pacific Ocean off Sonsorol Island, southwest of Palau at roughly 5°20’N 132°16’E, by the submarine USS Bluegill. She sank the next day. Nineteen crewmen were killed. Survivors were rescued by the Imperial Japanese destroyer Yuzuki.

1945: On 27 April 1945, the German submarine U-1105 detected three British frigates in the North Atlantic 25 nautical miles (46 km) west of County Mayo, Ireland, and fired two G7es – known to the Allies as “GNAT” – torpedoes at them. Fifty seconds later, the first torpedo struck the British Captain-class frigate HMS Redmill at approximately 54°23’00″N 010°36’00″W, followed a few seconds later by the second, together blowing 60 feet (over 18 meters) of her stern off. Thirty-two of her crew of 186 were lost. U-1105 evaded counterattack. Assisted by the British frigate HMS Rupert, Redmill managed to remain afloat and the wrecked frigate was towed to Lisahally, Northern Ireland. Found to be beyond economical repair, Redmill was declared a constructive total loss.

1945: The German Navy Sperrbrecher 167 struck a mine and sank on April 27, 1945, in the North Sea about 53°59.3’N 8°31.6’E off Cuxhaven, Schleswig-Holstein, Germany. Sperrbrechers were intended to serve as a type of minesweeper, by sailing ahead of other vessels through minefields, intending to detonate any mines in their path. Also used as anti-aircraft ships. As might be guessed, these vessels suffered heavy losses in the war.

1945: The armed American Victory ship (freighter) Canada Victory, 7,608 gross tons, was sunk was sunk while anchored in 22 fathoms of water off Okinawa, Japan, on April 27, 1945, by a Japanese suicide plane. Two gunners and a crewman were killed. Survivors swam to USS Lauderdale. Her location was reported as at latitude 26°33’15” north, longitude 127°41’47” east. Canada Victory was one of forty-seven ships sunk by kamikaze attack during World War II.

During a 1958 salvage attempt, the steamer’s cargo of ammunition detonated killing thirty more men. Just what cargo they were hoping to salvage isn’t known, perhaps they had reason to believe she was carrying gold or silver.

NOTE: This is by no means meant to be a complete list of the vessels lost on April 27, as there have been thousands of ships lost for every day of the year. All of the above entries have been edited (shortened) and come from various editions of Spence’s List™. The original lists usually give additional data and sources. Those lists are being updated and are or will be made available for a fee elsewhere on this site.