Did you know that the standard barrel used on ships in the 17th through 19th centuries was called a hogshead? But what size was standard? Due to ever changing government regulations, they varied in size from 48 to 140 gallons in capacity. But, the real question for this day is: Was the Norwegian steamer Alfred Olsen carrying a secret cargo of gold or diamonds when she was torpedoed on May 9, 1941? If you are reading this in a post, go to http://shipwrecks.com/shipwrecks-of-may-9/ to learn more about some of the many other shipwrecks that have occurred on this day over the centuries.

1738: The British ship Baltick Merchant, Captain George McKenzie, bound for Cowes, ran aground on the breakers while attempting to cross the Charleston, South Carolina, Bar on May 9, 1738. While working her off she sprang a leak and soon had nine feet of water in her hold. To keep her from sinking, she was run aground in the mud where her cargo of rice was unloaded. She was reported as totally lost.

The Baltick Merchant was 226 tons, with a square stern and carried 8 guns and 17 men. She was built in Great Britain in 1732 and was registered at Bristol on December 5, 1732, as owned by Griffon Prankard and George McKenzie. One of her passengers was a Sergeant McKenzie. 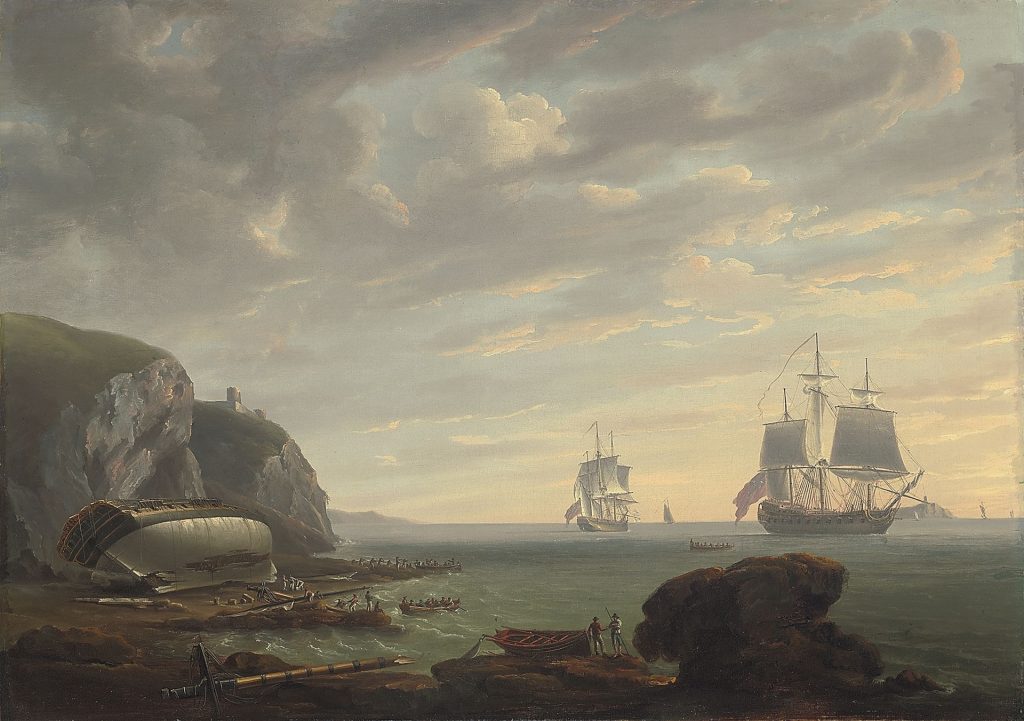 The wreck of HMS Crocodile as painted by Nicholas Pocock

1784: The HMS Crocodile, Captain Williamson, 170 men,  was returning from India and was with the HMS Rodney, Royal Henry, Worcester, and the East Indiaman Dutton, when, after entering the English Channel, the ships encountered thick fog and at half past two in the morning of the May 9, 1784, the Crocodile struck the rocks at Prawle Point, Devon, England. All of her crew was saved as well as some important despatches she was carrying. Built in Portsmouth in 1781, HMS Crocodile was a 114 ft long 24 gun Royal Navy sixth rate Frigate. 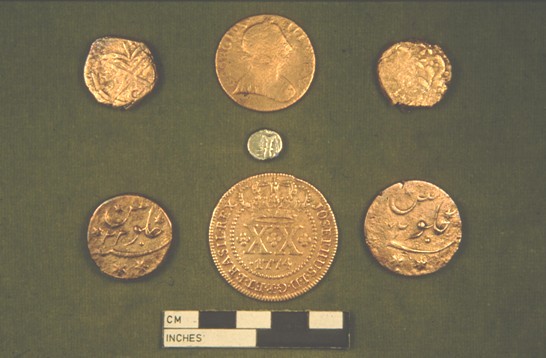 Coins from the 1784 wreck of HMS Crocodile.
Photo courtesy of Terry Crocker who discovered & now owns the wreck.

The wreck of HMS Crocodile, which was discovered by local Diver Terry Crocker who now owns her, is quite scattered and is co-mingled with at least two other wrecks. The Crocodile was extensively salvaged at the time and most of her cannon removed. Artifacts that have been found include iron cannon, copper pins marked with the British admiralty “broad arrow,” a lead sounding weight, etc.

1803: The Polish ship Johan Frederick, bound from Stettin, Poland, to London, England, was wrecked on Terschelling, Batavian Republic. Note: Terschelling is one of the West Frisian Islands and part of the Netherlands. It is situated between the islands of Vlieland and Ameland.

1809: The schooner Industry, Captain J. Findley, loaded with rice and cotton, and bound from Charleston to New York, was stranded on May 9, 1809, in Long Bay to the southward of Murray’s Inlet, South Carolina.

1810: The schooner Regulator, Captain Nelson, bound from Wilmington, with a cargo of rum, bacon, naval stores, and lumber went ashore on the Middle Breakers of the Charleston Bar, South Carolina, on May 9, 1810. Her people threw over “her deck load in hopes to get her off.” She was later reported to have gone to pieces and was entirely lost, except for a few hogsheads of rum, which were picked up. When Captain Nelson left her “the sea was breaking over her in such a manner as to render it impossible for him to save even his own clothing.”

Hogsheads were used for shipping everything from tobacco to fine china.

(Note by ELS: Hogsheads, abbreviated hhds, were large barrels, which ranged in size from 48 to 140 gallons in capacity, depending on their intended contents and the then current government regulations, which changed repeatedly over the years and also varied from country to country.)

She was owned by Captain Nelson and neither the schooner nor the cargo were insured. An advertisement published in the “Charleston Courier” of May 16, 1810, solicited the “Charitable and Humane” for “pecuniary aid” for the captain.

1811: The vessel Lady Provost, Captain Clary, of London, struck on the bar in coming out of Amelia Island, Florida, on May 9, 1811, and was feared lost.

1824: The vessel Cacigue, Captain Roy, bound from Bourdeaux, France to Vera Cruz, Mexico was totally on lost May 9, 1824. Her crew was saved and arrived in Sisal, Yucaton.

1832: The sidewheel steamer Pendleton, just arrived at Savannah from Darien, Georgia, with 650 bales of cotton, caught fire on May 9, 1832, and was entirely destroyed. The burning vessel was cut loose from the dock and was towed away from the other shipping by the steamer Georgia. Her cotton was insured for $19,000.

1836: The British ship Fame, bound from Greenock in Scotland, to Aux Cayes in Haiti, was wrecked on May 9, 1836, on La Folie Reef off Aux Cayes. Her crew was rescued.

1837: The schooner Tantivy while off the Bahamas, on May 9, 1837, saw a hermaphrodite brig, with a green coop top, with wrecks alongside taking out her cargo. The wrecker reported that the brig was from Matanzas, bound to Portland, and that she would be a total wreck.

1851: On May 9, 1851, a barque with foremast standing, and stripped, was seen aground south-east of Double Headed Shot Cays, Cay Sal Bank, Bahamas.

1858: The ship Clarendon, Captain Bartiell, bound from Sagua La Grande in Cuba to New York, with 1,097 hogsheads of sugar, “ran upon a ledge of rocks six miles SSW of Double Head Shot Key,” the night of May 9, 1858. “Captain Bartiell, after striking, got out anchors but could not move her. Sent to the lighthouse for aid, but could secure none. The first mate and four men then took the long boat and went to Key West and engaged three wrecking vessels to render the ship assistance. ••• The pumps in the meantime were kept going, and on the 12th the water gained on them; the same evening the wind shifted to SW causing a heavy sea, when the ship bilged and filled, the stern being in 30 feet and her bow in 14 feet. The ship now hove over very much, and it seemed was about to capsize, when her masts were cut away to ease her. ••• The mate returned the 14th with assistance, and some 60 hhds of sugar and a large portion of the materials of the ship were saved. ••• The vessel and cargo were valued at $150,000.”

1916: The British, White Star liner Cymric, bound from New York to Liverpool, was torpedoed on May 8 and sank the following day (May 9, 1916), 138-140 nautical miles west northwest of the Fastnet Rock, Ireland by the German submarine U-20, commanded by Walther Schweiger. Several people spotted the torpedo as it approached, but not in time to change course. Four or five lives were lost in the explosion with the remainder of the crew escaping in the lifeboats. When she didn’t immediately sink, her captain re-boarded and radioed an S.O.S. The men were picked up that evening and, from the safety of the decks of a British warship, watched their vessel sink. Her loss caused an immediate uproar in the marine insurance market, as U-20 was the same sub that had sunk the Lusitania, almost exactly a year before and it seemed the lull in sub attacks on merchant vessels might be at an end. The loss included tens of thousands of bottles of whiskey from the Hamilton Distillery in New Jersey along with tons of goods belonging to the Eastman Kodak Company, which may have included a shipment of silver bullion. And, the Cymric, which had previously carried a couple of large shipments of gold, may have carried gold on this trip too.

The Cymric was built by Harland and Wolff Limited at Belfast, Ireland in 1898. She was a twin screw cargo carrier with twin quadruple expansion, compound steam engines, and could make a top speed of 15 knots. She was 12,552 gross tons, 585 feet 5 inches in length, 64 feet 3 inches in breadth, and 38 feet in depth of hull.

1931: The Right Reverend R. G. Sheddon, Bishop of Nassau, and his sister were returning from Turk’s Island in his yacht, Livonia, when they were caught in heavy weather and wrecked at French Cays, near Acklin Island in the Bahamas on May 8, 1931. The Bishop and his sister landed safely in a 14-foot dinghy on Long Cay, but the yacht’s captain was drowned.

By the beginning of World War II the Doris was part of the 10th French submarine flotilla, which was moved to English port of Harwich in April 1940 to reinforce the British Royal Navy. During the move Doris suffered damage to the engine of the main gas compressor, responsible for producing the air to ascend after a dive. The machine could not be repaired in Harwich, nor could the work be done in France as there was no spare parts, as the original compressors had been designed and produced in Germany.

Despite being significantly crippled and unable to dive, on May 6, 1940, Doris was ordered to prepare for a patrol in the North Sea, north of the Frisian Islands, off the Dutch coast, guarding the east entrance to the English Channel, in anticipation of a possible German invasion of England. Her captain and crew openly wrote in their letters to their families that they were not expecting to come back. On May 8 five British and seven French submarines, including Doris, departed to carry out their patrol. On the following night, shortly after midnight, Doris was torpedoed and sunk north west of the Dutch coast in latitude/longitude 52°47.36’N 3°49.16’E, 30 miles from Den Helder, by the German submarine U-9 (1935) commanded by Wolfgang Lüth. The entire crew of Doris, and three Royal Navy personnel, were lost.

1941: The Norwegian tanker Alfred Olsen, Captain Magnus Warholm, bound from Capetown, South Africa, via Freetown, Sierra Leone for Aruba “in ballast” when she was attacked and sunk in latitude 02°59′ north, longitude 20°26′ west, by over one hundred shells fired from the Italian submarine Enrico Tazzoli , commanded by Fecia di Cossato. The submarine’s commander gave her position as “03N 21W.” (Note: Wartime is a strange time to be crossing an ocean in ballast, which means without cargo, and which, based on the ports and dates, makes me suspect she may have really been carrying a secret cargo, which could easily have been silver, gold, platinum and/or diamonds. All of which occupy very little space for their value so need not have been shipped on a regular cargo ship.)

1941: The British armed merchant steamer City of Winchester, Captain William Samuel Coughlan, bound from London to Capetown, South Africa and Beira, Mozambique with 6500 tons of general cargo, which had separated from Convoy OB-313, was torpedoed and sunk on May 9, 1941, about 400 miles south-southwest of Cape Verde, by the German submarine U-103, commanded by Viktor Schutze. Her captain, 84 of her crew, and 7 gunners were picked up by the Norwegian MV Herma and landed at Takoradi, Ghana. Six crew were lost.

The City of Winchester was built by Palmer’s Shipbuilding & Iron Company Ltd. at Newcastle-Upon-Tyne, England in 1917. she was 7,120 gross tons, and approximately 456 feet in length, 58 feet in breadth, and 31 feet in depth of hull.

NOTE: This is by no means meant to be a complete list of the vessels lost on May 9, as there have been thousands of ships lost for every day of the year. All of the above entries have been edited (shortened) and come from various editions of Spence’s List™. The original lists usually give additional data and sources. Those lists are being updated and are or will be made available for a fee elsewhere on this site.