The ship pictured here was the clipper Hereward, sunk near Sydney Australia in 1898. The ship stayed intact for months and was almost saved, before a storm broke her up. She reminds me of a beautiful three-masted ship that I tried to save in the Savannah River. I didn’t quite save it either. But that’s a story for another day. The wrecks that I find most interesting in today’s list were the three steamers sunk during the Civil War in the Red River at Dunn’s Bayou about twenty miles below Alexandria, Louisiana. If you are reading this in a post, go to http://shipwrecks.com/shipwrecks-of-may-5/ to learn more about some of the many shipwrecks that have occurred on this day over the years.

1756: The snow Brothers Adventure, Captain Robert Patterson, bound from Glasgow, was lost on the Charleston, South Carolina, bar on May 5, 1756, by the pilot Terry, “who some time ago ran the Jamaica Man of War ashore.”

1772: The brig Robert and Elizabeth, of Cowes, Captain Breeding Boyle, bound from Charleston to Lisbon, with 380 barrels of rice, sprang a leak and ran ashore on May 5, 1772, near South Edisto, South Carolina. Both the brig and her cargo were lost. The people, two anchors and some of the rigging were saved.

1800: The British brigantine Thomas was destroyed by fire on May 5, 1800, at Plymouth, Devon, England, with the loss of two of her nine crew.

1813: A vessel, identified only as a brig sailing with the southern convoy, struck on a rock between Buck Island and St. Thomas, Virgin Islands, and stuck there on May 5, 1813.

1813: The ship Thomas, 331 tons, Captain S. Bell, bound from St. Vincent to Bristol, struck on a reef between Buck Island and St. Thomas, Virgin Islands, on May 5, 1813. It was feared would sink where she struck. However, she remained afloat long enough for her to crew to run aground in the harbor, where she was afterwards reported with six feet of water in her hold. Some of her cargo was saved.

She drew 16′ of water when loaded. One report shows her as armed with twelve 12-pounder carronades, while another shows her as only having two guns. The Thomas was built at Yarmouth in 1810 and was copper bolted. She was owned by Brook & Company, and was rated A-1 for insurance purposes.

1817: The sloop Condoma, Captain Pitcher, passed a number of planks and beams off Martin’s Industry shoal, South Carolina, on May 5, 1817. Captain Pitcher thought they were part of a vessel wrecked on the coast.

1817: The vessel Marquis de Pombal, bound from Pernambaco to Operto, taken in March of 1817 by the Insurgent privateer Patricola, was run on shore about May 5, 1817, on the Florida Reef. Her cargo was saved and carried to Nassau.

1822: The vessel Columbine, Captain Bannatyne, from Tobago to Grenada, was lost near Grenada on May 5, 1822. The crew and materials were saved.

1832: The schooner Ortolan, Captain Cogdell, bound from Charleston to Georgetown, South Carolina, went ashore on the breakers near South Island, South Carolina, on May 5, 1832. The principal part of the Ortolan’s cargo of corn and hardware was expected to be lost. She had not bilged by May 7, 1832 and their hopes she might be got off.

1864: The sidewheel packet steamer John Warner, while in service of the United States Quartermasters Department and down bound on the Red River in advance her two escorts, the USS Signal and the USS Covington No. 2, was shelled and sunk by a Confederate battery at Dunn’s Bayou on May 5, 1864. No lives were lost.

1864: The USS Covington No. 2 was burnt in the Red River, about twenty miles below Alexandria, Louisiana, to avoid capture on May 5, 1864. The location was also given as “near Dunn’s Bayou, La.”

The Covington, originally a ferry, had been purchased and converted into a “tin-clad.” She was a sidewheel steamer of the fourth rate. Her armament consisted of four 24-pounder smooth bores, two 30-pounder Parrott rifles, two 50-pounder Dahlgren rifles, and one heavy 12-pounder.

1864: The USS Signal (aka Tinclad 8) was sunk by Confederate shore batteries in the Red River, about twenty miles below Alexandria, Louisiana, on May 5, 1864.

1835: The vessel Washington, bound from New York to Mobile, was lost on Abaco, Bahamas some time previous to May 6, 1835. Her cargo was saved in a very damaged state, and was sold at Nassau.

1850: The bark A.R. Taft went ashore near Charleston, South Carolina, on May 5, 1850. At one point the tide was reported flowing completely over her decks at high tide, and she was believed to be a total loss, except for a considerable quantity of damaged goods saved by several pilot boats and smacks. The wreck was sold for $710 to Colonel G.W. Brown who, despite expectations to the contrary, managed to get her off and tow her tow a Charleston wharf.

1898: The clipper ship Hereward, Captain Gore, bound from Sourabaya, Indonesia to Newcastle New South Wales was wrecked on May 5, 1898, when it ran into a large storm with winds as high as 47 miles per hour. The winds destroyed the sails of the ship and blew it towards the shore leaving the captain unable to avert the disaster. The Hereward was forced onto the northern end of Maroubra Beach, near Sydney, Australia, but avoided the two rocky reefs present there. All 25 crew members were safely brought ashore. The ship remained intact and after a few months it was sold to an entrepreneur, who hoped to save it. He attempted to refloat the ship by using her steam winches to pull on a rope connected to an anchor almost a thousand feet out to sea. He almost succeeded. He managed to get the ship into 14 feet of water, but before he could get her totally free, a southerly gale blew up and pushed the Hereward back onto the beach where it was battered by high seas and broken in two. 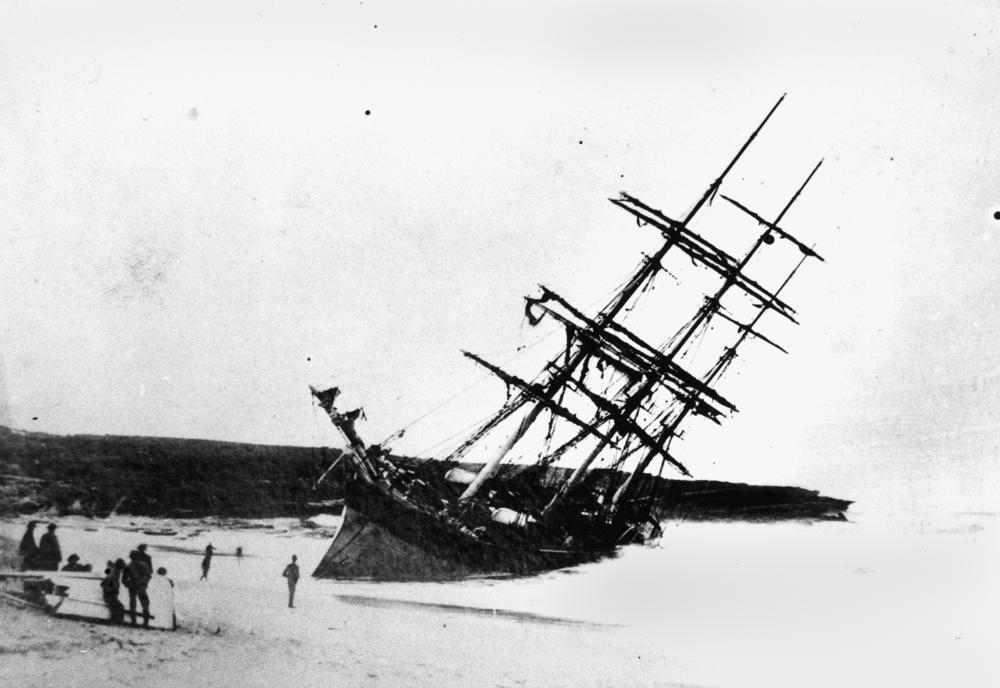 1917: The armed British freighter Feltria, a Cunard Shipping Line steamship, bound from New York to Avonmouth, England, was torpedoed by the German, Type-UC-II, minelaying submarine UC-48 eight to ten miles from Minehead, Waterford, England, on May 5, 1917. She went down within 15 minutes. All but 20 of her crew died from hunger and exposure before they could be rescued. Her cargo included 766,666 pounds of zinc oxide, 56,490 pounds of steel ingots, 193,000 pounds of brass rods, 351,089 pounds of spelter, and two million empty brass shells weighing approximately 1,300 tons.

1942: During the May 3 to 4, 1942, Allied invasion of Tulagi in the British Solomon Islands Protectorate, the Imperial Japanese navy destroyer Kikuzuki was torpedoed by United States Navy aircraft from the aircraft carrier USS Yorktown in Tulagi harbor on May 4, killing 12 crewmen and injuring 22 of her complement of 150 men. The submarine chaser Toshi Maru No.3 towed her to the beach at Gatuvu Island and took off the survivors. Kikuzuki then slid back into the water on May 5, 1942, during the next high tide cycle, drifted and sank at longitude/latitude 09°07’S 160°12’E. After the capture of Tulagi by American forces, the U.S. Navy repair ship USS Prometheus salvaged Kikuzuki’s wreck, hoping to obtain military intelligence. Kikuzuki’s partially-dismantled hulk still lies in Ghovana Bay on the island of Nggela Sule, which is sometimes called Florida Island and is one of the two main islands of the Nggela Islands in the Central Province of Solomon Islands, in the southwest Pacific Ocean. 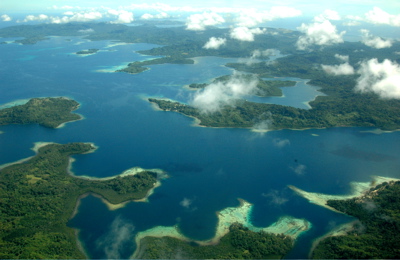 The Nggela Islands from the air, courtesy Jim Lounsbury & Wikipedia 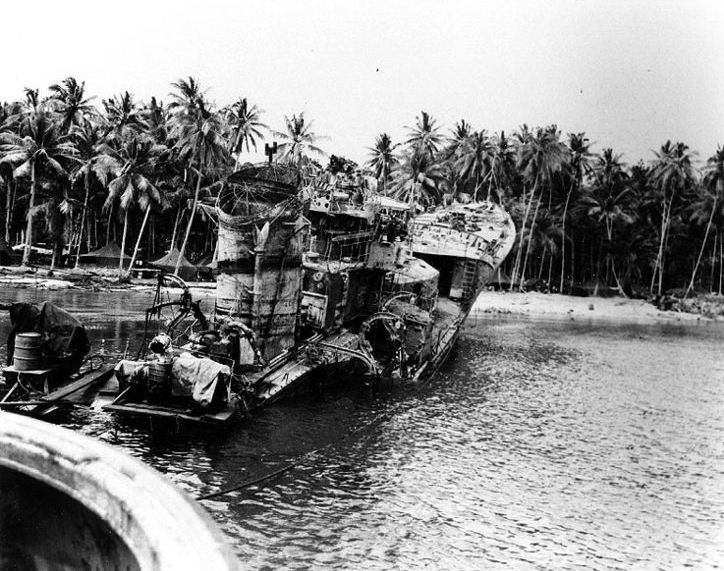 The rusting hulk of the Japanese destroyer Kikuzuki, photographed in August 1943 after U.S. forces dragged the wreckage onto the beach.

The Kikuzuki was a Mutsuki-class destroyer with a displacement of 1,800 tons when deeply loaded. She was 335 feet 11 inches in length overall, with a breadth of 30 feet 1 inch, and a draft of 9 feet 9 inches. Her armament consisted of four 4.7-inch Type 3 guns, two triple 24-inch torpedo tubes, eighteen depth charges and 16 mines. She could make 37.25 knots and had a range of 4,000 nautical miles at 15 knots.

1942: The Fisheries II, which had been requisitioned by the United States Navy for the defense of the Philippines during World War II, was in service from December 8, 1941, until she was scuttled at Corregidor on May 5, 1942 to prevent her capture by the Japanese. Although Fisheries II was officially credited with one battle star for her participation in the defense of the Philippines, she was never formally commissioned, so she is not correctly described as USS Fisheries II.

1942: Realizing war with Japan was imminent, and following a long and perilous voyage across the South China Sea, the USS Oahu (PY-6), a river gunboat, which was never designed for open sea operations, arrived at Manila Bay, Philippines, in the week before the attack on Pearl Harbor. When war began, the warship operated in and around Manila Bay and Cavite Navy Yard on inshore patrol and in support of U.S.-Filipino forces on Bataan until after the fall of that peninsula on April 8, 1942, and then continued to operate about the island fortress of Corregidor until sunk by enemy gunfire on May 5, 1942. 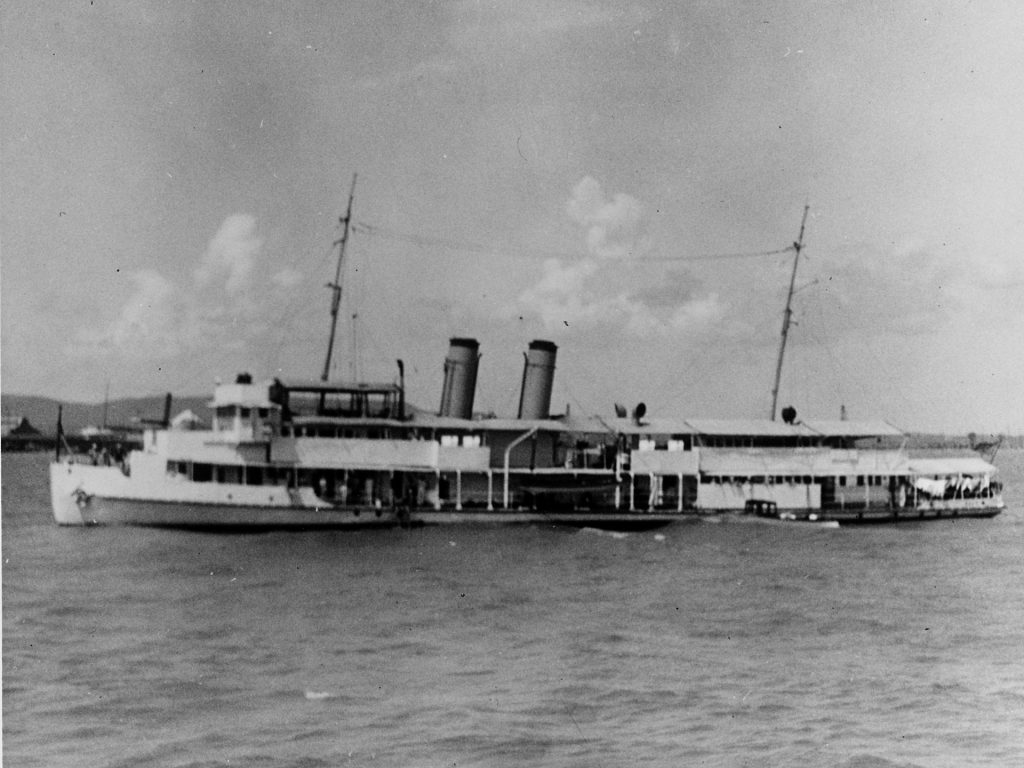 The USS Oahu was built by Kiangnan Dock and Engineering Works. She was launched November 26, 1927, as PG-46, and was commissioned as PY-6 on October 22, 1928. She was 191 feet in length, 28 feet 1 inch in breadth, 5 feet 3 inches in draft and was 460 tons displacement. The Oahu had a 1,900 horsepower triple expansion engine and could make 15 knots. She had a crew of 55 and was awarded: the Yangtze Service Medal; the China Service Medal; the American Defense Service Medal with “FLEET” clasp; the Asiatic-Pacific Campaign Medal with one battle star; the World War II Victory Medal; the Philippine Presidential Unit Citation; and the Philippine Defense Medal with star.

1942: At the outbreak of war between Japan and the United States, USS Quail (AM-15) was in the Philippines. During the defense of Corregidor, the Quail swept a channel providing access to South Harbor, Corregidor. Her crew then went ashore to aid in the defense of that island. Damaged by enemy bombs and guns, Quail was scuttled May 5, 1942, by U.S. forces to prevent her capture. 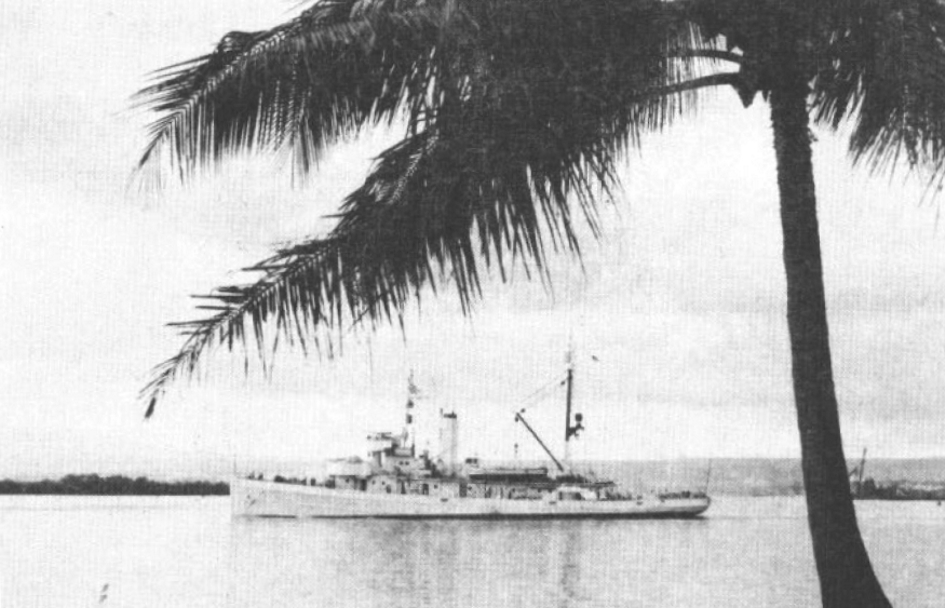 The USS Quail was scuttled in Manila Bay, Philippines, on May 6, 1942, to prevent her capture.

She was a Lapwing-class minesweeper, 187 feet 10 inches in length, 35 feet 6 inches in breadth, 8 feet 10 inches in draft, and was 853 tons. She was armed with two 3-inch (76mm) guns. Part of the Quail’s 61 man crew, consisting of Lt. Cmdr. John H. Morrill and seventeen others, escaped to Darwin, Australia, in a 36-foot motor launch. Quail was awarded one battle star for World War II service.

NOTE: This is by no means meant to be a complete list of the vessels lost on May 5, as there have been thousands of ships lost for every day of the year. All of the above entries have been edited (shortened) and come from various editions of Spence’s List™. The original lists usually give additional data and sources. Those lists are being updated and are or will be made available for a fee elsewhere on this site.