On this day in 1943 the German sub U-752 became the first sub sunk by a new weapon called a Rocket Spear, which was launched from a British Swordfish aircraft. The 1858 wreck of the packet ship Knickerbocker on the N.E. point of Abaco would make an interesting dive. I would love to see what’s left of it. Today’s questions are: Was HMS Braak carrying treasure when she sank off Delaware in 1798? If so, what happened to it? And, what happened to UB-3 in 1915? Was she reassembled incorrectly and where is she? If you are reading this in a post, go to http://shipwrecks.com/shipwrecks-of-may-23/ to learn more about some of the many shipwrecks that have occurred on this day over the centuries.

1798: On May 23, 1798, the brig-rigged 16 gun sloop of war HMS Braak capsized in Delaware Bay with the loss of 48 lives. The Royal Navy seized the former Dutch Republic cutter De Braak, 18 guns, as she entered Falmouth, England, shortly after the newly proclaimed Batavian Republic, unknown to De Braak, declared war on the British. The British took her into service as HMS Braak and re-rigged her as a brig-sloop. She was initially commissioned under Commander James Drew on 13 June 1797. A storm at the end of the year dismasted her. On the completion of repairs, she returned to service in February 1798 and was assigned to escort a convoy to the Virginia Capes. She sailed for Halifax on March 17, 1798. On April 2nd, whilst off the Azores, she became separated from the rest of ships. Towards the end of the month she fell in with and captured a Spanish ship, reportedly worth some £160,000 in prize money. Braak duly arrived in Delaware Bay on May 25, and took on a pilot from Cape Henlopen. Shortly after this a strong and sudden squall blew up and before the crew could take action the ship capsized. The capsizing drowned Drew and 35 of his crew, as well as their 12 Spanish prisoners. 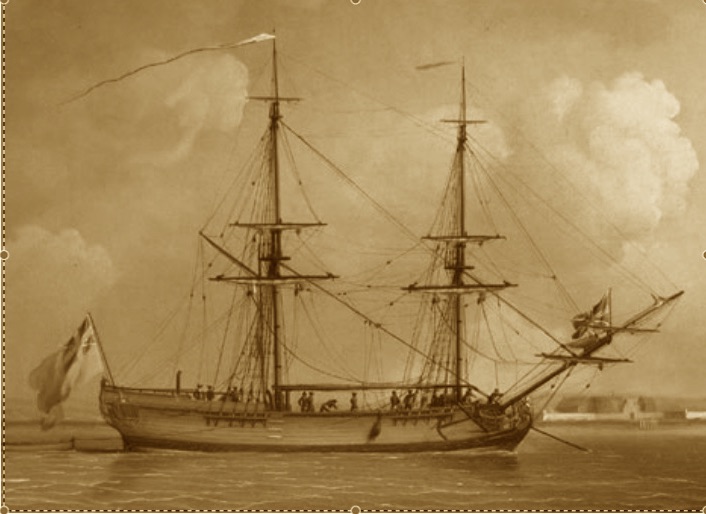 HMS Braak was a brig rigged sloop of war and would have looked much like this.

The wreck lay on the bottom off Delaware, but soon became the subject of rumors concerning the amount of treasure the Braak purportedly carried when she sank. A number of artifacts including a ring belonging to Captain Drew were raised during the 1980s. Only a small amount of coin was reportedly found. The hull was eventually raised and placed in a museum, as were many of the recovered artifacts.

The Dash was built at Baltimore in 1808, and was owned by Attwood. She was a sharp model vessel, with a single deck, deep waist, and drew 14′ of water when loaded. She had a pine bottom, sheathed with copper. Her armament consisted of two 9-pounders of the “common construction” and twelve 9-pounder carronades.

1844: The hermaphrodite brig Jefferson, of Warren, Maine, Captain Mills, went ashore on the South Breakers near the entrance to Bull’s Bay, South Carolina, on May 23, 1844. She had been bound from New York, via Beaufort, North Carolina, with a load of stone for Fort Sumter, when she was lost. Her crew stripped her of her sails and rigging before abandoning her. They were carried to Charleston by the pilot boat Caroline.

1858: The packet ship Knickerbocker, bound from Liverpool to New Orleans, with 111 passengers and cargo was wrecked May 23, 1858 “on the N.E. point of Abaco,” during a strong wind and was expected “to be a total loss.” Three passengers attempting to board a sloop from the ship were drowned. The Knickerbocker’s passengers were carried from Nassau to New Orleans by the schooner Buena Vista. The wreck of the Knickerbocker caught fire on June 3 and was totally destroyed. The cargo was said to have been saved in a damaged condition.

Note: Packet ships typically carried mail, which often contained money. There was no mention of the mail being lost or saved. Nor is there any mention of what happened to the passengers’ baggage.

1871: The British brig Joanie Clark, Captain Colton, bound from St. John, New Brunswick, Canada, for Havana, with a cargo of lumber, “was totally lost on Abaco” the night of May 23, 1871. The master arrived at Nassau and reported that most of the lumber had been landed on the beach. She was 145 tons register, and was built at New Brunswick.

1915: The German Type UB I submarine UB-3 disappeared on her first patrol in May 1915. She was the first of her class to be lost. A postwar German study concluded that UB-3 was likely the victim of an unexplained technical problem in the absence of any minefields or enemy action.

UB-3  was about 92 feet in length and 140 tons. She carried two torpedoes for her two bow torpedo tubes and was also armed with a deck-mounted machine gun. She was launched at Kiel in March 1915.

UB-3 was broken into sections and shipped by rail to Pola, Croatia, in April where she was reassembled. She officially joined the German flotilla at Pola on May 1, and departed on her first patrol for temporary duty in Turkey on May 23, and was never seen again.

1943: When 32 days into her 9th patrol, the German submarine U-752, commanded by Karl-Ernst Schroeter, was attacked in the mid-Atlantic on May 23, 1943, by a Swordfish aircraft flying off the British escort carrier HMS Archer. A Rocket Spear, a new weapon with a solid cast iron head, went entirely through both sides of the sub’s pressure hull, and the U-752 went down with her commander and 28 crew members. There were seventeen survivors. This was the Rocket Spear’s first success. 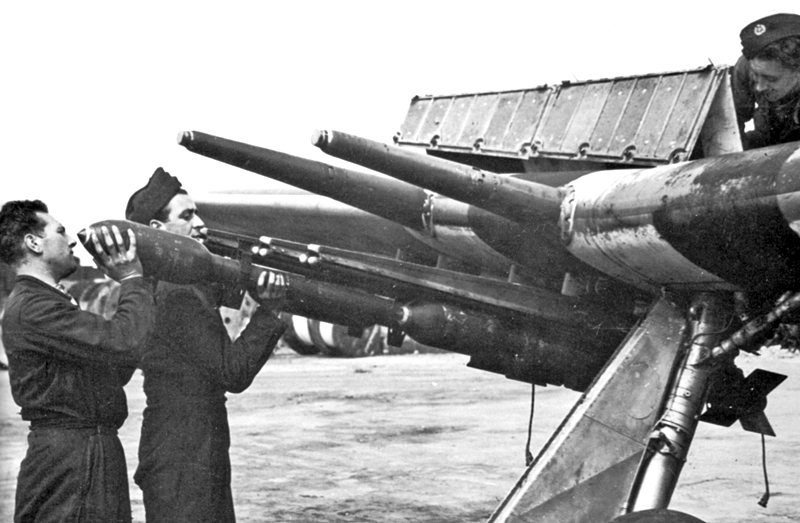 Rocket Spear being loaded on a Typhoon 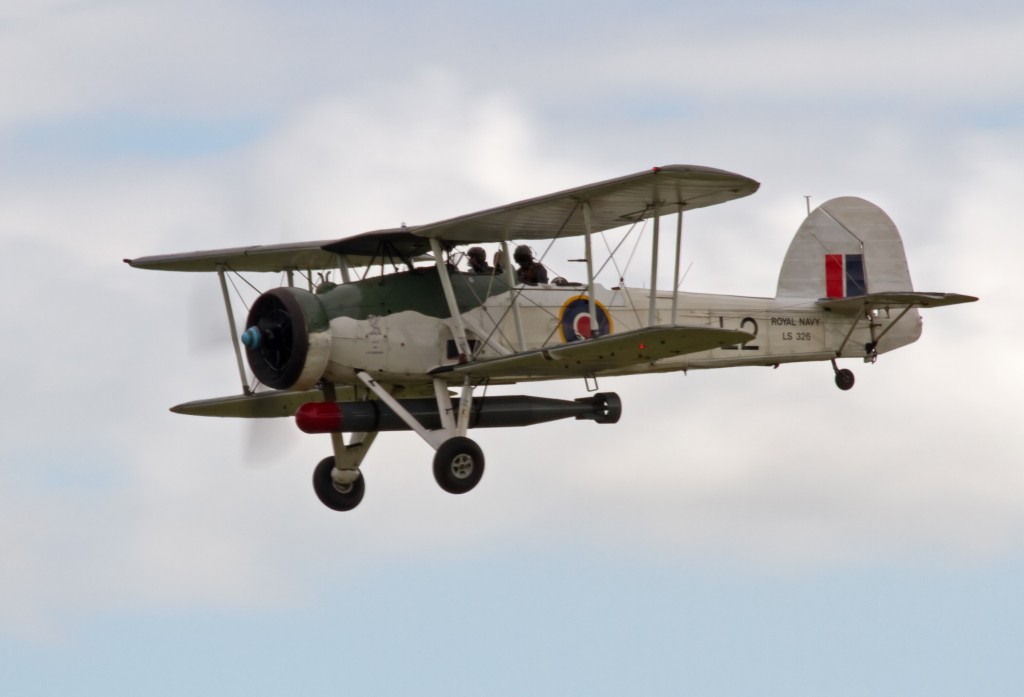 Swordfish armed with a torpedo

NOTE: This is by no means meant to be a complete list of the vessels lost on May 23, as there have been thousands of ships lost for every day of the year. All of the above entries have been edited (shortened) and come from various editions of Spence’s List™. The original lists usually give additional data and sources. Those lists are being updated and are or will be made available for a fee elsewhere on this site.