One of the shipwrecks that took place on a May 21, was that of the riverboat Republic, which had once been piloted by Mark Twain. Today’s question is whether there were boxes of gold coins on the Dominican steamer Presidente Trujillo when she was torpedoed in the Caribbean during World War II. If you are reading this in a post, go to http://shipwrecks.com/shipwrecks-of-may-21/ to learn more about some of the many shipwrecks that have occurred on this day over the centuries.

1799: The ship British vessel Martha and Ann , bound from King’s Lynn, Norfolk to Emsworth, Hampshire, England, was wrecked on the Kentish Knock Sands in the North Sea on May 21, 1799. Her crew were rescued by the British ship Palladium.

1813: A report dated at Kingston, Jamaica stated that the American privateer Lovely Lass, commanded by Lt. Smith, which was captured by the Circe, after a chase of twenty hours, was thought to be the same privateer which had “burnt and scuttled two small craft, off Running Gut,” on May 21, 1813. The page for that day was said to have been “torn out of the log-book, and James Hill, overseer on Running Gut, and others in that neighborhood, declare most positively they saw the crew of one of the boats (three in number) on board when she sunk.” When taken, the schooner-rigged privateer had fifty men on board and a twelve pounder. Prior to her capture, the Lovely Lass had thrown overboard four of her guns. She was fitted out at New Orleans, and was manned by “a complete set of desperadoes, natives mostly of New Orleans.”

1836: The Spanish ship Nueva, Captain Esperanza, bound from Barcelona to the Havana, was wrecked on Abaco in the Bahamas on May 21, 1836.

1862: A flatboat belonging to Mr. J.I. Middleton, which was taken by the Federals during a foray up the Waccamaw River, South Carolina, on May 21, 1862, was sunk less than half a mile from where they took it. The boat was loaded with plunder when it was accidentally sunk.

1852: The British schooner Lark, of Liverpool, Nova Scotia, from Halifax, ran ashore on the rocks Turks Island during the night of May 21, 1852. The vessel was a total loss.

1858: The brig Gleam, of London, was found abandoned and masts cut away, on Molasses Reef, Turks & Caicos, on May 21, 1858. A wrecking craft later arrived at Nassau with 33 bales of tobacco and 30 bales bark from the wreck. Her crew and part of her cargo were said to have been taken out by a craft from Turk’s Island.

1862: The brig Joseph was burned by the Confederates in the Waccamaw River within sight of the Federal gunboats, which had run up near Georgetown, South Carolina on May 21, 1862.

1863: The sidewheel packet steamer Republic, which had been taken up the Yazoo River by the Confederates for the purpose of converting her to a ram, was burned at her mooring near the Confederate Navy Yard, at Yazoo City, Mississippi, on May 21, 1863. David DeHaven and John T. Shirley had just paid $25,000 for the old steamer and were taking out her machinery when she was burned under the orders of Lieutenant Isaac N. Brown to prevent her from being captured by the Federal forces.

Once considered quite a “floating palace,” the Republic was built in 1855 at Jeffersonville, Indiana, for the Louisville – New Orleans trade, Captain Ed Montgomery. Her first home port was Louisville. Samuel Clemmons, later famed as humorist and novelist Mark Twain, served as a junior pilot on this steamer. She was sold before the start of the Civil War to Captain A. Baird and company. Her last owner under Confederate registry was Eliza Anne Wayne, wife of Alfred Gordon Wayne. She was used on the Yazoo River in 1862 and 1863.

1899: Captain J.W. Wines of the schooner H. S. Marloe, which was wrecked at the mouth of the Ozama river, in Santo Domingo, Dominican Republic, on May 21, 1899, afterwards filed a formal complaint alleging that his ship had been deliberately run ashore and plundered by government officials. The same thing was alleged to have happened to other American vessels calling at that port.

1902: The American schooner Amelia Hearn, Captain Griffith, bound from Baltimore for Tarpun Bay, Bahamas was wrecked May 21, 1902 on Abaco reef and was a total loss. The crew was saved.

1941: The British armed merchant steamer Piako, bound from Albany (in western Australia) to Freetown (Sierra Leone) and Liverpool, with 1500 tons of zinc, was torpedoed and sunk by the German submarine U-107, commanded by Gunter Hessler, on May 21, 1941, in latitude 07°52′ north, longitude 14°57′ west. Ten of her crew of 75 were lost. Survivors were rescued by HMS Bridgewater. The sinking was also described as west of Monrovia, Liberia, and as off of Sierra Leone, West Africa. Several sources give the day of loss as May 18.

According to one researcher the Piako probably a significant amount of silver. He also points out that she was a refrigerator ship, and bullion was frequently disguised as frozen meat and stored in reinforced meat lockers.

The Piako was built in 1920 by Alexander Stephen & Sons at Glasgow, Scotland. She was owned and operated by the New Zealand Shipping Company. She was 8,283 tons, 450′ feet in length, 58 feet in breadth, and was 37 feet in depth of hull. Her official number was 1132766 and her signal letters were GBYP.

1941: On May 21, 1941 the American steamer Robin Moor, Captain W.E. Myers, bound from New York to Mozambique via South Africa, without an escort, was stopped by the German submarine U-69 about 750 miles west of Freetown, Sierra Leone even though the Robin Moor was flying the American flag, which was still officially a neutral country. She was carrying 9 officers, 29 crewmen, and 7 or 8 passengers. After a brief period allowed for the ship’s crew and passengers to board her four lifeboats, the U-boat fired a torpedo and shelled the ship. Once the ship had disappeared into the sea, the submarine’s commander explained that the ship had been sunk because she was carrying supplies to Germany’s enemy. Her location was also described as in latitude 06°15′ north, longitude 25°30′ west, approximately 700 miles south of the Cape Verde Islands and a similar distance from Dakar in French West Africa. Her crew survived but only after a long ordeal at sea.

In response to the sinking U.S. president Franklin Delano Roosevelt told Congress that Germany’s decision to sink the ship was “a disclosure of policy as well as an example of method.” His message concluded: “In brief, we must take the sinking of the Robin Moor as a warning to the United States not to resist the Nazi movement of world conquest. It is a warning that the United States may use the high seas of the world only with Nazi consent. Were we to yield on this we would inevitably submit to world domination at the hands of the present leaders of the German Reich. We are not yielding and we do not propose to yield.” The State Department then required Germany and Italy to close all of their consulates in the United States except for their embassies, prompting Germany to issue the same directive to the United States in return. The U.S. also demanded damages and reparations from Germany, without success. The truth was, much of the ship’s 5,263 tons of cargo, which included 473 tons of tin plate, 190 tons of iron, 30 tons of glassware, and 480 tons of automobiles, was made up of the kind of materials meeting the German and British standards for contraband, so Germany had the legal right to destroy her, making some believe that Roosevelt’s message was really just an effort to justify the United States entering the war. 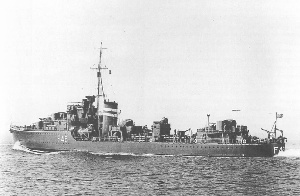 1941: The British, J class destroyer, HMS  Juno, Commander St. John Reginald Joseph Tyrwhitt, was attacked and sunk 30 miles southeast of Crete on May 21, 1941 by an Italian bomber flown by Lieutenant Morassuti, as she steamed with the Allies Mediterranean Fleet against the German sea-borne invasion of Crete. She sank in about a minute and a half, taking with her 116 lives.

1942: The Dominican steamer Presidente Trujillo, bound from Fort de France, Martinique, for San Juan, Puerto Rico, was torpedoed on May 21, 1942, in latitude 14°38′ north, longitude 61°11′ west. Officially, she carried a cargo of rice, forage and beer making equipment, but there is reason to believe she also carried a shipment from some of the 9,000 boxes of French gold coins known to have been stored at Fort Desaix in Martinique.

NOTE: This is by no means meant to be a complete list of the vessels lost on May 21, as there have been thousands of ships lost for every day of the year. All of the above entries have been edited (shortened) and come from various editions of Spence’s List™. The original lists usually give additional data and sources. Those lists are being updated and are or will be made available for a fee elsewhere on this site.