Early accounts of shipwrecks often only listed the month of loss, so its hard to compile a list of them for a particular day. Even though many ships were undoubtedly lost on April 7, during the 17th, 18th and 19th centuries, most of the ones on this list are WWI and WWII losses, which are easier to trace. If you are seeing this in a post, other than on Shipwrecks.com, read more about these wrecks and other ships lost on an April 7 at http://shipwrecks.com/shipwrecks-of-april-7/.

1804: According to a report filed at Cape Nicholas Mole, Hispaniola, on April 7, 1804, an unidentified French privateer was captured by HMS Blanche and destroyed (probably by burning).

1861: A letter dated April 7, 1861, at Berlin, Worcester, Maryland, stated that the brig Rodney Carr, of Stonington, Connecticut, bound from Havana to New York, with honey and, sugar, and tobacco, was ashore off that beach, bilged, and full of water. She was expected to be a total loss.

The Rodney Carr was built at Damariscotta in 1853. She had a wood hull and was 155 tons. She was rated A2 1/2 for insurance purposes and was owned by Brett Son & Company of New York.

1889: The schooner Hattie Lollis, Captain Charles W. Sharp, bound from Washington, North Carolina, to Hartford, Connecticut, lost her sails, sprang a leak and was driven ashore 1.5 miles NNW of the Nag’s Head Station, during the North Carolina gale of April 7, 1889.

Her crew of five survived with the help of Captain Etheridge and the “surf men” of the U.S. Life Saving Service. Two days later the vessel broke up and, except for the anchors, chains, rigging and a small portion of the cargo of lumber, which were saved, she was a total loss. (Note: This was actually the second time that the Hattie Lollis had gone ashore on the North Carolina coast. The first time was in a gale on November 2, 1882, but she was got off that time with but little damage.)

Two other schooners, the John S. Wood, and the Parrot, were lost in the same storm. The Wood was lost off Wash Woods, while the Parrot was lost with two people in Albemarle Sound.

1917: Unarmed and unable to fight back, the crew of American freighter Seaward (or Seward), 18 days out of New York bound to Genoa, Italy, abandoned ship in their lifeboats after a submarine fired two warning shots. Before scuttling the freighter the submarine’s commandant asked the steamer’s captain whether the lifeboats had sails. When answered in the affirmative, he pointed westward so they would know which way to steer for shore. A demolition team then boarded the Seward and planted the time bombs to sink her.

1918: The British armed merchant freighter Highland Brigade, bound from London to South America, with tin, was torpedoed by a German submarine on April 7, 1819. Her location was described as in the English Channel six miles southeastward from St. Catherine’s Point on the Isle of Wight. She was built in 1901 by William Beardmore & Co. Ltd., in Glasgow, Scotland. She was 5,662 gross tons, 3,694 net tons, 381′ in length and 49.4′ in breadth, with a 653 nominal horsepower triple expansion steam engine. She could carry 40 first class passengers and make 11 knots. See picture.

1941: The British merchant cruiser Comorin caught fire in the North Atlantic in “54.34N, 21.20W” on April 6, 1941, and was scuttled on April 7, 1942, 450 miles west of Ireland. All but 20 of the 470 on board were taken off by the motor vessel Glenartney; the ex-US destroyer HMS Lincoln; and the destroyer HMS Broke. The latter repeatedly pulled alongside for survivors to jump from one ship to the other. The fire could not be controlled and she was shelled and sunk by the destroyer HMS Lincoln, which fired into her with her guns. 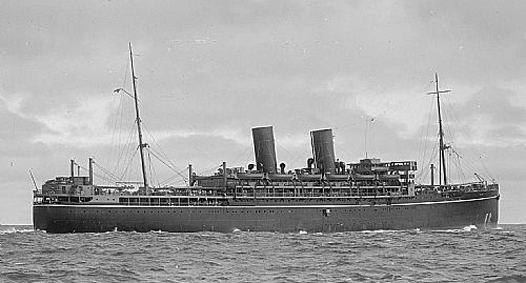 1941: The Canadian ship Portadoc was sunk by the German submarine U-124, which fired one torpedo and 24 rounds from her deck gun. When the attack took place, the Portadoc was about 240 miles west of Freetown, Sierra Leone. Her crew of 20 saved themselves in two lifeboats. Her location was also given as “07.17N, 16.53W – Grid ET 5321.”

1941: On April 6, 1941, German planes bombed the British trawler (minesweeper) Rochebonne, Captain Setterfield, off the Lizard, Cornwall, England. HMT Rochebonne, 258 tons, was sunk with the loss of eleven lives. She was built in 1913.

1942: The American freighter Washingtonian (ex-Willzipo), bound from the Suez to Colombo, was spotted by the Japanese submarine I-4  on April 7, 1942, (some accounts show April 6) at the Western entrance to the Eight Degree Channel. Around 3:55 p.m. the submarine fired two torpedoes at the steamer. After a torpedo has been sighted 500 yards away, bearing down on the port side, the steamer tried to turn, but received two hits. The fuel tanks were ruptured and flames engulfed the entire ship. Within ten minutes, with the ship was listing 25 degrees to port, but all 10 officers, 29 men and two passengers cleared the ship in two lifeboats. It took them less than a day to arrive in the Maldives.

1942: Despite traveling with two armed escort vessels and being armed with a 4-inch gun, a 12-pound gun, and a 40 mm Bofurs gun and two machine guns, the UK tanker British Splendour, 7,138 tons, bound from Houston, Texas, to Nova Scotia, was torpedoed by the German submarine U-552 at 2:17 a.m. on the morning of April 7, 1942. She was carrying 10,000 tons of gasoline and the ship was quickly in flames. Twelve men died, forty-one survived. The wreck is in 85 to 100 feet of water off the coast of North Carolina. Photo of British Splendour afloat. Underwater shot of the wreck. 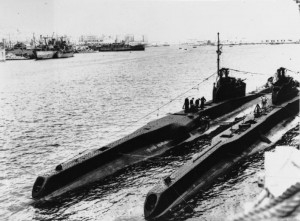 HMSM Turbulent moored up on the outboard side. Photo courtesy Imperial War Museum

1945: On April 7, 1945, 60 miles northwest of Bima, the Japanese cruiser Isuzu was struck by one of five torpedoes fired by USS Gabilan. The torpedo hit portside, below the bridge, causing flooding forward. Isuzu’s speed fell below 10 knots she took on a list and went down at the bow. While her crew was performing emergency repairs, USS Charr fired four torpedoes, hitting Isuzu port side twice near the aft engine room. Charr fired two more torpedoes, one of which broke off Isuzu’s bow. Isuzu sank at latitude 7°38′ south, longitude 118°09′ east. The sinking was witnessed and confirmed by HMS Spark. Isuzu’s captain and 450 crewmen were rescued; 190 crewmen went down with the ship.

Isuzu was the second of the six 5,570 ton vessels, each 531’10” in overall length, 46’7″ in breadth, completed in the Nagara-class of light cruisers, and like other vessels of her class, she was intended for use as the flagship of a destroyer flotilla.

Armament for this class consisted of seven 140 mm (5.5 in) guns; Two 25-mm AA guns; six 13-mm machine guns, eight 610-mm (24 in) torpedo tubes; and 48 naval mines. Isuzu was the only cruiser, which underwent conversion into a dedicated anti-aircraft/anti-submarine cruiser. Between May–September 1944, all of her main guns were removed and replaced by a total of three Type 89 twin-mounted anti-aircraft guns, with a Type 94 fire-control system added to the foremast. Her Type 96 25 mm AA guns were increased to a total of 11 triple-mounts and 17 single-mounts. Her torpedo launchers were replaced by two quadruple launchers mounted in the stern, along with two depth charge rails. She was given a complete set of the latest radar, hydrophones and sonar. So, her destruction was an important victory. 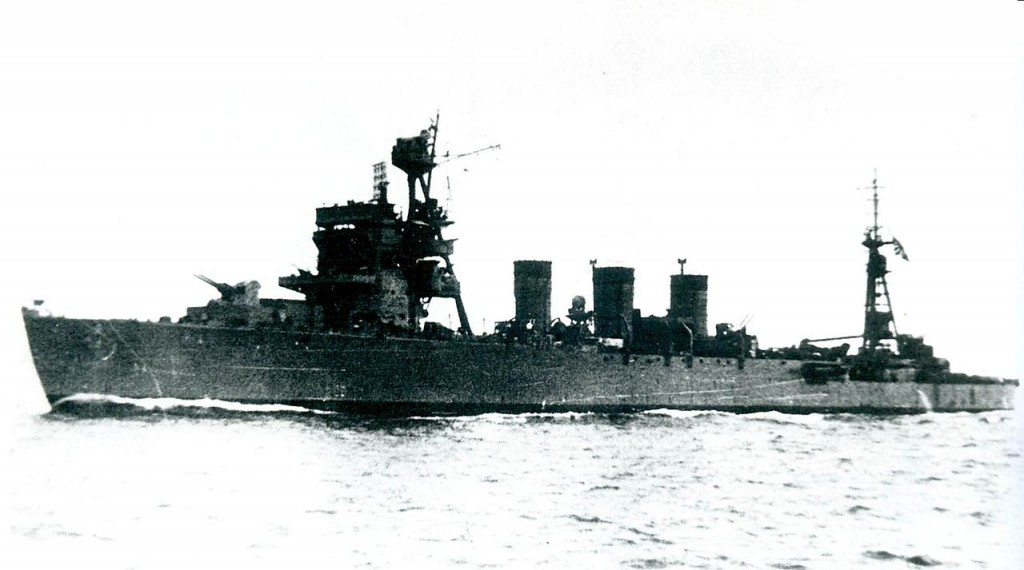 Japanese cruiser Isuzu after modification in 1944

1945: While en-route to attack the US fleets off Okinawa, Japan, the battleship Yamato was attacked on April 7, 1945, by US carrier aircraft resulting in her loss, along with several of her escorts. 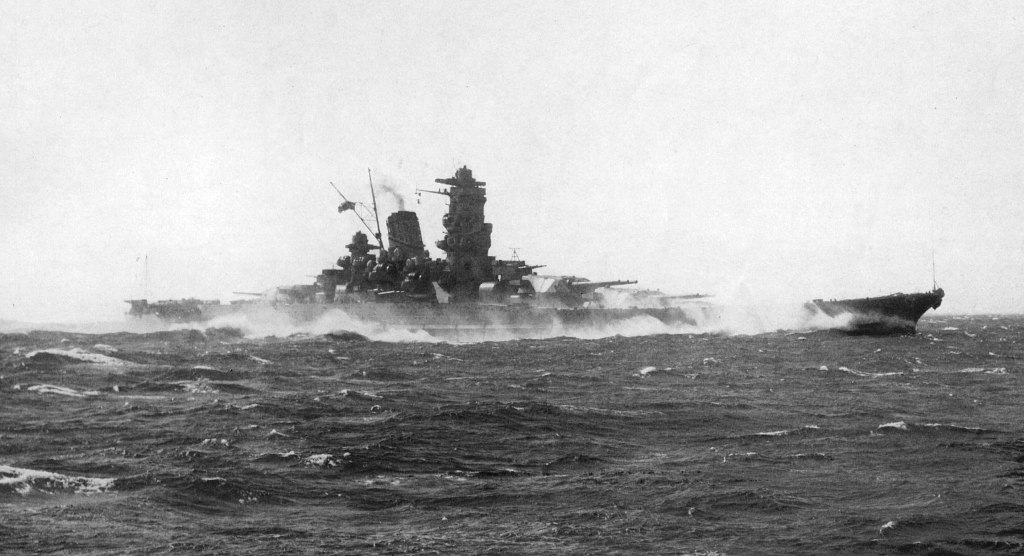 The heavily armed battleship was 65,027 tons, 839’11” in length, and 127’7″ in breadth. She represented the epitome of Imperial Japanese naval engineering, and because of its size, speed, and power, visibly embodied Japan’s determination and readiness to defend its interests against the Western Powers and the United States in particular. Historically, the word “Yamato” was used as a poetic name for Japan; thus, her name became a metaphor for the end of the Japanese empire. 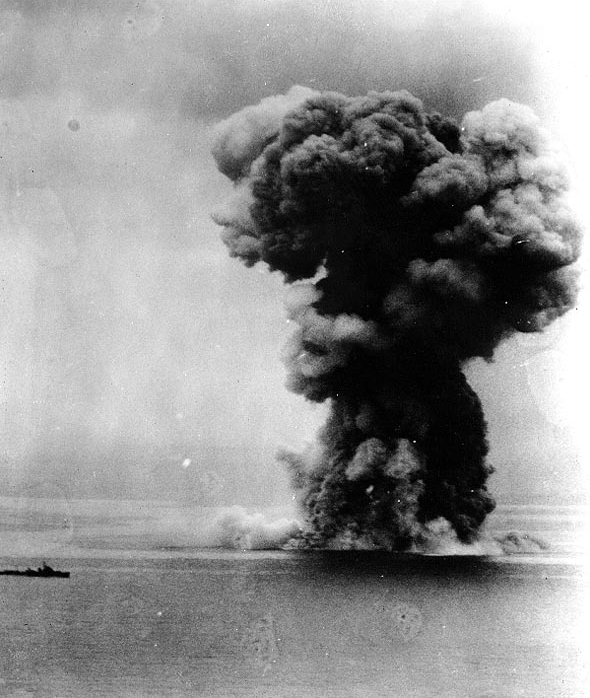 The explosion of Yamato‘s magazines

Because of the often confused circumstances and incomplete information regarding their sinkings, few wrecks of Japanese capital ships have been discovered and identified. Drawing on US wartime records, an expedition to the South China Sea in 1982 found some wreckage, which they believed was the Yamato, but it could not be positively identified. A second expedition returned to the site two years later, and the team’s photographic and video records were later confirmed by one of the battleship’s designers, Shigeru Makino to show the Yamato‘s last resting place. The wreck lies 180 miles to the southeast of Kyushu under 1,120 feet of water. She is in two main pieces: a bow section comprising the front two thirds of the ship, and a separate stern section.

NOTE: This is by no means meant to be a complete list of the vessels lost on April 7, as there have been thousands of ships lost for every day of the year. All of the above entries have been edited (shortened) come from various editions of Spence’s List™. The original lists usually give additional data and sources. Those lists are being updated and are or will be made available for a fee elsewhere on this site.