April 6 was another interesting day for shipwrecks with everything from the destruction of privateer ships in 1767 to a freighter that was blown up at her dock in 1944, scattering gold bars across the seafloor. Less than half of the bars have been recovered. Bars collectively worth tens of millions of dollars are still unfound. If you are seeing this in a post, read more about these wrecks and other ships lost on an April 6 at http://shipwrecks.com/shipwrecks-of-april-6/

1767: On the night of April 6, 1797, a privateer stronghold at Cape Roxo, was raided by the boats of the Magicienne, 32 guns, Captain Ricketts, and the Regulus, 44 guns, Captain Carthew. Thirteen square rigged vessels and schooners were taken, sunk, or burnt, and the two batteries destroyed.

1769: The “South Carolina Gazette” of April 6, 1769, reported that Captain Charles Brown of the schooner Pitt had met with the wreck of a square rigged vessel in seven fathoms of water off Seewee Bay, South Carolina. (Note One: The vessel was painted white and her masts had already been carried away. It was thought that she had foundered while at anchor.) (Note Two: Sewee Bay was the old name for the entirety of Bull’s Bay, South Carolina, but now designates just an off shoot or sub bay of it.)

1826: A large ship, with painted ports and her masts already gone, was seen “on shore near Key Vache” (probably Île à Vache, Haiti) on April 6, 1826. There were two wreckers near her.

1863: The Confederate transport steamer Marion, Captain John Flynn, was accidentally blown up and sunk in thirty feet of water in the Ashley River near the mouth of Wappoo Creek, South Carolina, on April 6, 1863, while laying torpedoes (mines). The steamer’s whole bottom was blown out and her machinery destroyed. The Marion had a wood hull and was built at Charleston, South Carolina, in 1850, and passed to Confederate hands in 1860 (or 1861). The vessel had two decks, one mast, no galleries, no figure head, and sidewheels. The vessel measured 258 71/95 tons, 132’4″ in length, 30′ in breadth, and 7’2″ in depth of hull.

1912: Despite a dense fog limiting visibility, the British barkentine Mildred, which had a schedule to keep, was sailing along with full sails, when she struck rocks at Gurnard’s Head, Cornwall, and sank. Fortunately, no lives lost.

1912: The Norwegian ship Gunvor was wrecked on April 6, 1912, when she ran on the Pedn-Men-an-Mor rocks, Black Head, The Lizard, Cornwall, United Kingdom. Her crew saved themselves by climbing over her side to the relative safety of the rocks.

1942: The American steamer Bienville was sunk on April 6, 1942, while bound from Calcutta, India, for Colombo in Sri Lanka,, in latitude 17°48′ north, longitude 84°09′ east. Some documentation seems to suggest that she carried precious metals in addition to her manifested cargo. See image.

1942: The freighter Exmoor was shelled and sunk on April 6, 1942. Her captain, Ragnar Frederick Eklund, was afterwards awarded the Merchant Marine Distinguished Service Medal “For especially meritorious service under unusual demands and hazards. His was the only American ship in a convoy of seven, all of which wore sunk in the Bay of Bengal by heavy shell fire from three enemy cruisers. The first salvo threw him from the bridge into the ship’s office, breaking one or two of his ribs and injuring his left ankle. He returned to the bridge and ordered the bridge watch below to the lifeboats and remained alone on the bridge at the helm of his sinking ship, directing the lowering of the boats. He did not leave the bridge until the forward deck was completely under water. Although the loss of life from the other ships was high, Captain Eklund managed to land his entire crew safely on the Indian Coast with the survivors of the other ships. There the injured were treated, and the entire company set out on foot through twelve miles of dense jungle to the nearest river village. From this point, the survivors were taken in buses to Cattuck, 50 miles from the coast, and thence returned to Calcutta. His extraordinary achievement and leadership will be an enduring inspiration to seamen of the United States Merchant Marine everywhere.” 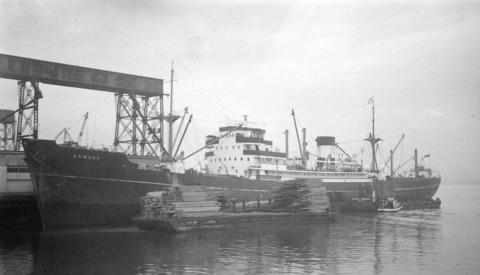 1943: The American liberty ship John Sevier was torpedoed by the German submarine U-185 and sunk in latitude 20°25′ north, longitude 74°00′ west, in the Windward Passage between the islands of Cuba and Haiti on April 6, 1943.

This map shows the Windward Passage marked in red.

The torpedo’s wake was seen by the crew just 5 seconds before it struck on the ship’s starboard side. She filled and sank in just two minutes. All of her people escaped in her lifeboats and arrived at Guantanamo the same afternoon.

She was owned by the War Shipping Administration and was the leading vessel in convoy GTMO-83 outbound from Guantanamo to Mobile, Alabama. The cargo consisted of 9,060 tons of bauxite ore.

1944: The British steamship Fort Stikine, which had sailed from Birkenhead, England, with a valuable cargo that included 124 bars of gold that weighed a total of 49,966 troy ounces (or about 403 ounces each), was discharging her cargo at Bombay (Mumbai), India, when she caught fire on April 6, 1944. The flames quickly reached the 1,400 tons of munitions she was carrying and she blew up. The explosion was so great that military ships anchored nearby were completely destroyed and many sailors from the Royal Indian navy were killed. By the end of 1946, a total of about 25 bars had been recovered from the sunken hull. After 1946 a few bars were found during normal dredging of the harbor. The most recent recovery of the gold was two bars that came up in a dredge in February of 2011. Even with that recovery, there are thought to be at least 65 gold bars left weighing a total of roughly 26,195 troy ounces. At today’s price of about $1,328 per troy ounce the bars would be worth about $34,786,960.

NOTE: This is by no means meant to be a complete list of the vessels lost on April 6, as there have been thousands of ships lost for every day of the year. All of the above entries have been edited (shortened) come from various editions of Spence’s List™. The original lists usually give additional data and sources. Those lists are being updated and are or will eventually be made available for a fee elsewhere on this site.