Lots of interesting shipwrecks took place on April 5, including a French warship in 1762 and two freighters torpedoed in 1943, which are believed to have carried tons of silver now worth millions of dollars. If you are seeing this in a post, other than on Shipwrecks.com, read more about these wrecks and other ships lost on an April 5 at http://shipwrecks.com/shipwrecks-of-april-5/ 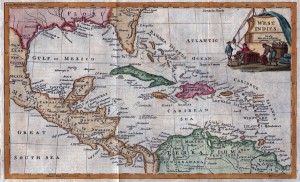 Map of the West Indies from the era that the French ship Dragon was wrecked.

1783: The “South Carolina Weekly Gazette” of April 5, 1783, reported that a schooner bound for Charleston was run ashore and burned on Bull’s Island, South Carolina, by the same privateer that had destroyed the Eliza on March 30.

1849: During the Battle of Eckernførde, the Danish Ship-of-the-Line Christian VIII, the frigate Gefion and the paddle steamers Hekla and Geiser, under Commander S. G. Paludan, attacked the German gun batteries at Eckernførde inlet. The Christian VIII took fire and blew up.

1921: The Canadian schooner J.L. Ralston was burned in Santo Domingo harbor on April 5, 1921. The USS Chemung heroically rescued the schooner’s crew and carried them to San Domingo, for which she was commended by the British legation there. She was 156’ in length and 35’ in breadth

1860: The British ship Try, Captain Isbester, bound from Grenada to Savannah, Georgia, struck on the South Breakers of the Tybee Bar, and had remained there for about four hours. She was then brought into Tybee, Georgia, and anchored, but she had apparently been bilged while on the bar, and she was run ashore to prevent her from sinking in the channel. On April 5, 1860, her captain was quoted as saying he had “no hopes of saving her.”

1896: On April 5, 1896, the British warship Pelican found 300 rifles, 200,000 cartridges and a quantity of other property buried beneath the sand on the beach of Cay Sal, Bahamas. They are part of the cargo of the Bermuda, which “recently left this city (London) with arms and munitions for the insurgents.”

1941: The German submarine U-76, was forced to the surface and scuttled by her own crew to prevent her capture following a prolonged depth charge attack by HMS Scarborough, HMS Wolverine and HMS Arbutus. The British rescued 42 men.

1941: The British screw steamer Ena de Larrinaga, bound from Britain to Argentina with coal was sunk by the German submarine U-105, 800 miles northwest of Natal, Brazil, on April 5, 1941. Four crew and 1 gunner were killed. A lifeboat with 38 survivors was found after drifting for 13 days, and the people carried to Brazil.

1942: Shortly after 11:00 on the evening of April 5, 1942, the American tanker Catahoula, Captain Gunvald B. Johannesen, bound from San Pedro de Macoris, Dominican Republic to Wilmington without an escort, was struck by a torpedo fired from the German submarine U-154. The resulting explosion ripped up deck plates that destroyed the catwalk to the poop deck. The engine room bulkhead was blown out, flooding the engine room and drowning an officer and a crewman. Molasses was blown over the entire length of the vessel.

The Catahoula was armed with one 4-inch, four .50-caliber and two .30-caliber guns from which her armed-guards fired at the sub’s periscope, while the radio operator sent out distress signals. Minutes later, a second torpedo struck her, rolling the tanker over and sinking her. The resulting wave swamped two lifeboats, which were already in the water, drowning five more crewmen.

Fortunately, the remaining lifeboat, with 25 men and a raft with 13 more, got away safely and were picked up about 10 hours later by the USS Sturtevant (DD 240).

The Catahoula had a steel hull, was 5,030 gross tons, 3,105 net tons, 390.0’ in length, 54.2’ in breadth, and 27.8’ in depth. She was built at Hog Island, Pennsylvania, in 1920, for the tanker service for a crew of 32 (not counting her master), but was authorized to carry up to sixteen additional people without being classed for the passenger service. She was American Bureau of Shipping rated. She was fitted for burning oil and was 2,500 shaft horsepower. She was owned by the Cuba Distilling Co. of West Virginia, whose address was Curtis Bay, Baltimore, Maryland. Her home port was Baltimore. Her official numbers were 220629. She had a radio transmitter and her signal letters were KDFG. A picture of her is in the Mariners Museum.

1942: Fifty-three dive bombers and torpedo bombers from the Japanese cruiser Tone attack and sink the British cruisers Cornwall and Dorsetshire 200 miles Southwest of Ceylon on April 5, 1942. The Dorsetshire has 234 killed and the Cornwall 190. A total of 1,122 men are rescued by the British cruiser Enterprise and the destroyers Panther and Paladin.

1943: The British freighter Aloe, 5,047 tons, bound from Bunbury, Australia, to Durbon, South Africa, was torpedoed off the South African coast in latitude 32°37′ south, longitude 37°50′ east, on April 5, 1942. A second torpedo quickly cut her in half. The freighter was owned by the Union Government of South Africa. She carried 5,000 tons of timber, 1,500 tons of wheat, 320 tons of lead bars, and tons of overseas mail, which often included money. Since silver was mined along with lead, and it was an important wartime cargo, she probably carried silver as well.

1943: The freighter Shillong, with 8,000 tons of zinc concentrates and very likely a shipment of silver bullion, was torpedoed on April 5, 1943, in latitude 56° north, longitude 36° west, southeastward from Greenland, by the German submarine U-635, commanded by Heinz Eckelmann. She was part of convoy HX-231 bound to England. A picture of her is posted on Aquatours website.

NOTE: This is by no means meant to be a complete list of the vessels lost on April 5, as there have been thousands of ships lost for every day of the year. All of the above entries have been edited (shortened) come from various editions of Spence’s List™. The original lists usually give additional data and sources. Those lists are being updated and are or will be made available for a fee elsewhere on this site.