I have always been fascinated by the Comet sunk in Charleston Harbor, South Carolina, on April 30, 1780, as I believe she is still largely intact and could be found. There have been lots of merchant vessels and warships lost on this day including some in both World Wars. If you are seeing this in a post, other than on Shipwrecks.com, read more about these wrecks and other ships lost on an April 30 at http://shipwrecks.com/shipwrecks-of-april-30/.

1780: The British galley Comet, Captain Jackson, and the British frigate Renown, intending to attack the bridge battery at Mount Pleasant, South Carolina, on April 30, 1780, ran aground and the Comet was lost, but the Renown got off. The Comet was the ex-South Carolina Navy brigantine Comet which had been captured by HMS Daphne, and had been cut down to a galley and armed with one 18-pounder and six 6-pounders. (Note: I have always thought that this wreck would be fairly easy to find and there may be quite a bit left of her. This wreck was wrecked in an area where she may have quickly filled with mud and been covered over or subsided into the bottom.)

1838: The brig Alexander, bound for Kingston, Jamaica, “ran ashore on Grand Key” in the Turks & Caicos Islands on April 30, 1838, and was expected to be a total loss. The crew was saved.

1842: A sloop loaded with pine, lying at the public landing at the foot of Chapel Street, Charleston, South Carolina, caught fire and burned on April 30, 1842.

1862: The USS Shawsheen sank a schooner filled with sand as a block-ship near the entrance to the Albemarle and Chesapeake canal in late April of 1862. 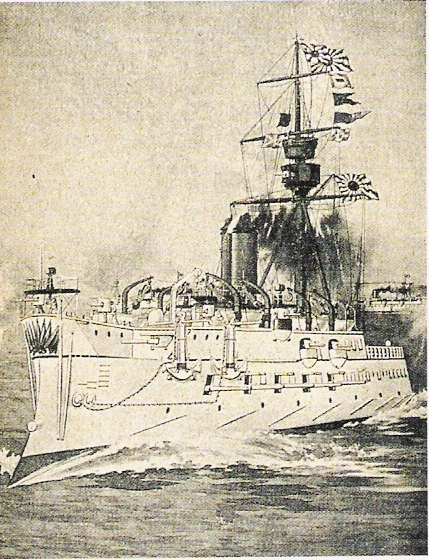 1908: The Japanese cruiser Matsushima was sunk on April 30, 1908, while anchored at Mako in the Pescadores islands off of Taiwan. She returning from a training cruise when an accidental explosion occurred in her ammunition magazine. Matsushima rolled over onto her starboard side and then sank stern-first at latitude 23°32′ north, longitude 119°34′ east. The accident killed 206 of her 350 member crew. Her wreckage was raised and scrapped. (Note by ELS: Although the records show Matsushima as raised and scrapped, she was 4,285 tons and parts of her may still be left. Such salvage efforts were extremely expensive and were usually done for clearance purposes, and meant only to remove to a certain depth those portions of wrecks that obstructed the waterway.)

1914: The Swedish freighter Ystad collided with the Norwegian steamer Liv at Cuxhaven, Germany on April 30, 1914 and sank with the loss of one life. Her crew were saved. 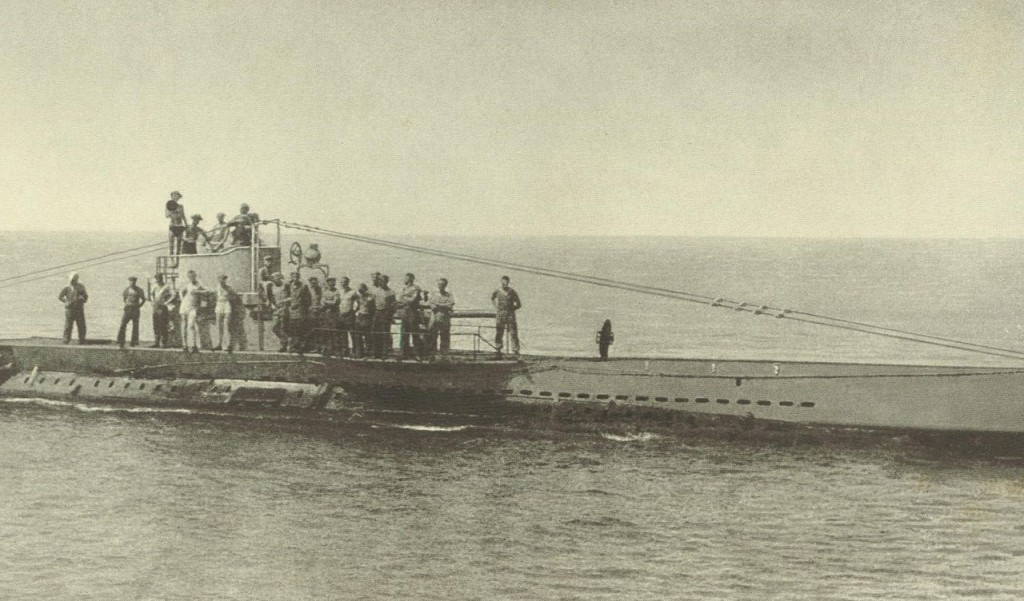 German submarine U-38 with her crew, which sank the Swedish freighter Elida.

1915: The British collier Fulgent was scuttled in the Atlantic Ocean on April 30, 1915 approximately 45 nautical miles northwest of the Skellig Islands, County Kerry, Ireland, by U-30 with the loss of two of the Fulgent’s crew.

1915: The Norwegian coastal freighter Laila was sunk in the North Sea in latitude 56°51′ north, longitude 3°09′ east by the German submarine U-35. Her crew survived.

German submarine U-35 at sea. She sank the Norwegian coastal freighter Laila.

1915: The Russian freighter Svorono was sunk in the Atlantic Ocean about 14 nautical miles west of the Blasket Islands, off County Kerry, Ireland by the German submarine U-30.

1915: According to the 1915 List of Merchant Vessels, the American gas screw Margaret M. Ford was lost on April 30, 1915, by stranding on “Riding Rocks, Bahamas, British West Indies.” One life was reported lost of a crew of eight. She had a wood hull and was 132 feet in length, 34.2 feet in breadth and 11.7 feet in depth of hold, built at Vinalhaven, Maine, in 1904, and was 365 gross tons 291 net. Her official number was 200863 and her signal letters were KTCD. Her home port was New York, New York. Note: Other sources give a different date and location of loss.

1916: The Spanish cargo ship Bakio was torpedoed and sunk in the Atlantic Ocean on April 30, 1916 by the German submarine U-20, which is most remembered for sinking RMS Lusitania.

1916: The British cargo steamer City of Lucknow was torpedoed and sunk in the Mediterranean Sea on April 30, 1916 sixty nautical miles east of Malta in latitude 36°03′ north, longitude 15°45′ east by SM U-21. Her 42 crew survived and were rescued by HMS Rifleman. (Note: U-21 sank HMS Pathfinder, which was the first ship sunk by a torpedo fired from a submarine.)

1916: The Norwegian coastal steamer Mod was sunk in the North Sea approximately 40 nautical miles east by north of the mouth of the River Tyne in latitude 55°45′ north, longitude 0°25′ west by the German submarine UB-27. Her crew survived.

1916: The Spanish cargo ship Vinifreda was sunk in the Bay of Biscay in latitude 47°48′ north, longitude 7°48′ west by the German submarine SM U-45 with the loss of a crew member. Survivors were rescued by the Greek steamer Elpis. 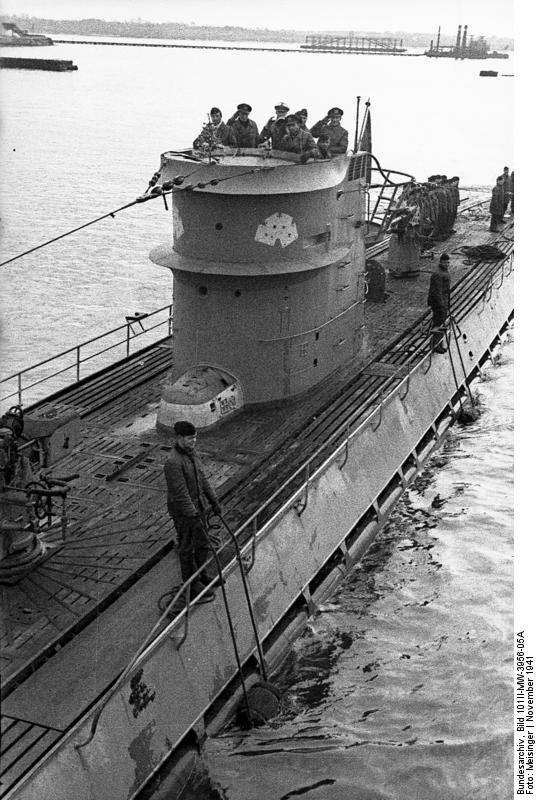 1941: The British cargo ship Lassell, 7,417 gross register tons, traveling with Allied Convoy OB 309, was torpedoed and sunk in the Atlantic Ocean 250 nautical miles south west of the Cape Verde Islands, Portugal (12°55’N 28°56’W) by German submarine U-107, with the loss of two of her crew of 53. Survivors were rescued by British vessels Benvrackie and Egba.

1942: On April 30, 1941, the Soviet cargo ship Ashkhabad, 5,284 gross tons, bound from New York City for Matanzas, Cuba, under escort by the Royal Navy trawler Lady Elsa, was seriously damaged by a torpedoed fired by the German navy submarine U-402  when she was about 18 nautical miles south of Cape Lookout, North Carolina, in latitude/longitude (34°19?N 76°31?W). Her 47 crew members were rescued by the British navy tug HMT Lady Elsa. Ashkhabad had been assessed as salvageable and her officers requested that a salvage tug be despatched to her aid, but before help could arrive she was fired into and scuttled as a hazard to navigation. 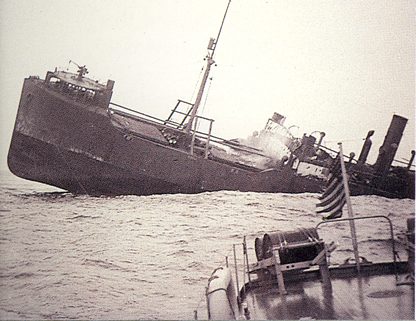 Here is more or less what happened: At 9:50PM on April 29, 1942, Lady Elsa spotted a U-boat five hundred yards off the tanker’s starboard beam. Lady Elsa fired a round but the submarine had already launched its torpedo, striking Ashkhabad on its starboard side. Ashkhabad‘s gun crew fired three quick rounds at the submarine when it partially surfaced, but scored no hits. Captain Alexy Pavlovich gave the order to abandon ship. Two life boats and one raft holding forty-seven crew members (three of which were women) were rescued by Lady Elsa and taken to Morehead City, North Carolina. There were no injuries. At 10:00AM the next day, crew from the British navy trawler HMT Hertfordshire boarded Ashkhabad and took valuable navigational equipment and clothing. The Russians returned to their ship at 3:00PM only to discover that it had been looted. The next day the Russians returned to their ship just in time to catch Hertfordshire‘s crew removing more loose items from the ship. The Russians informed Hertfordshire‘s crew that the Ashkhabad was not abandoned and salvage tugs were on the way, the British returned the items they had taken. According to her captain, Ashkhabad‘s condition was stable and it could have been kept afloat and towed to port, however, word supposedly never got out that it was awaiting salvage. On May 3, 1942, the United States Destroyer Semmes saw Ashkhabad and, believing it to be it an abandoned ship and a navigational hazard, fired three rounds which caused the midship superstructure to catch fire. HMS St. Zeno saw the fire and went towards Ashkhabad and fired a shot at it under the authorization of the commanding officer of Hertfordshire, who commanded all British trawlers at Morehead City. His explanation was that he considered Ashkhabad a menace to a large convoy expected in the area, so he authorized the firing to sink Ashkhabad to extinguish the fire. Some believed the action was taken in retaliation for the Russians having claimed Hertfordshire’s crew had knowingly looted their ship. Because of this series of military screwups, before the salvage tug, Relief, could get to Ashkhabad, she was a total loss.

The SS Ashkhabad was built as the freighter SS War Hostage in 1917 at Glasgow, Scotland, but had been converted to a tanker to carry fuel oil, and was registered in Odessa, Russia, where she was owned by the Soviet Union shipping line Sovtorgflot. She was 400 feet 9 inches in length, 52 feet 3 inches in breadth, and 28 feet 6 inches in depth of hold.

Today, the wreck of the Ashkhabad is a popular dive site. The wreck is in just 55 feet of water off North Carolina, close to the shoals, which are an hour boat ride from the Beaufort inlet. Because the tanker was torpedoed and fired into at least twice before her sinking, and, because the wreck was blasted with explosives in 1943 and again in 1944 as a navigational hazard and to prevent its silhouette from being used as a hiding place by German submarines, the ship’s remains are very broken up. The connecting rods directly aft of her boilers is all than can be seen of her triple expansion steam engine, which was once capable of generating 489 horsepower and could drive her at 11 knots. However, considerable wreckage including her boilers/condenser and frames from her steel hull are still recognizable, as are deck plates, deck beams and pillars that can be found scattered about on the surrounding seafloor.

1942: The British merchant tanker Athelempress was torpedoed by German submarine U-162 and sunk, with the loss of three of her 50 crew, in the Atlantic Ocean, about 180 nautical miles east of Barbados in latitude/longitude 13°21’N 56°15’W. Her survivors were rescued by the Norwegian vessel Atlantic.

1942: The U.S. flagged tanker Federal was torpedoed and sunk in the Atlantic Ocean, with the loss of five of her 33 crew, 5 nautical miles north of Gibara, Cuba, in longitude/latitude 21°13’N 76°05’W by German submarine U-507. The survivors were rescued by a Cuban fishing vessel or reached shore in their lifeboat.

1942: The Norwegian cargo ship Taborfjell was torpedoed and sunk, with the loss of all but three of her crew of 20, in latitude/longitude 41°52?N 67°43?W in the Atlantic Ocean 95 nautical miles off Cape Cod, Massachusetts, USA, by German submarine U-576. The survivors were rescued by British submarine HMS P552.

1942: The Soviet Union cargo ship Tsiokolvsky, which was traveling with Allied Convoy QP 11, was torpedoed and sunk in the North Sea by German destroyers Z24 and Z25.

NOTE: This is by no means meant to be a complete list of the vessels lost on April 30, as there have been thousands of ships lost for every day of the year. All of the above entries have been edited (shortened) and come from various editions of Spence’s List™. The original lists usually give additional data and sources. Those lists are being updated and are or will be made available for a fee elsewhere on this site.