Among the numerous vessels lost on April 23 were brigs, ships and barks. They were French, Norwegian, British, American, Australian, German, and Russian. One, yet to be discovered, German submarine, carried a cargo of gold bars. If you are seeing this in a post, other than on Shipwrecks.com, read more about these wrecks and other ships lost on an April 23 at http://shipwrecks.com/shipwrecks-of-april-23/. 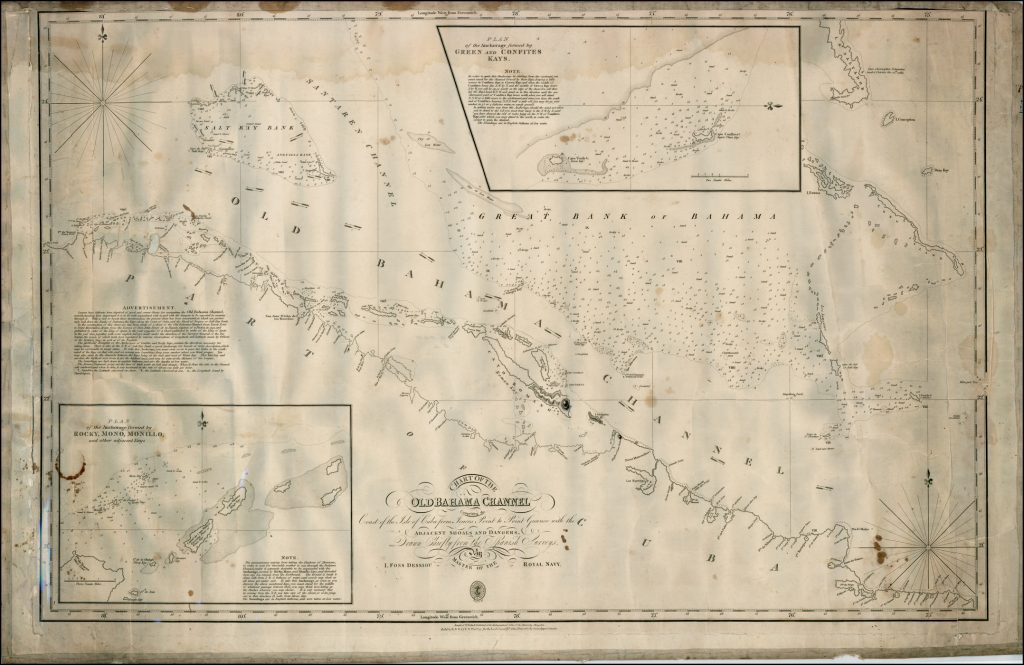 1816: The American brig Flora, Captain Laisné, bound from Havana to Guersney, was totally lost “on the Bahamas” on April 23, 1816. Her crew was saved. She was built in New York about 1811 and had a single deck with beams, was sheathed with copper, and was rated A-1 by Lloyd’s.

1827: The British ship Pigott, Captain Blake, bound from Jamaica to London, was lost on April 23, 1827, “on the Turtle Keys” near Bimini, Bahamas. Her crew was saved. According to the Register of Shipping, the Pigott was 354 tons, built at the Isle of Wight in 1817. She had a single deck with beams, which effectively means she was a two decked ship, but her lower deck was only partially decked to better allow for the stowage of cargo. She was sheathed with copper in 1821, and had undergone repairs in 1825. She drew 16 feet of water. Her survey port was London and she was trading between there and Jamaica. Her construction was of the first class and her rigging was of the first quality.

1853: The Australian bark Litherland, 316 tons, Captain J. Smith, bound from Newcastle, New South Wales to Hobart, Tasmania was lost on the rocks on the western side of Clarke Island on April 23, 1856. She was a former whaling vessel reduced carrying coal due to a decrease in the demand and price for whale oil. She was built in 1834 and was about 102 feet in length, 26 feet in width and 17 feet in depth of hold.

The Litherland’s captain afterwards gave this account of her loss: “At 8 o’clock on the 23rd the wind was variable from S. to S.E., ship heading S.W., Clarke Is. bearing west, distance about 30 miles, at 11 a.m. bore up for Clarke’s Island, the wind at S.E. blowing hard with thick hazy weather. At 4 p.m. got up 60 fathoms of chain on the larboard anchor, and 35 fathoms of chain cable on the starboard anchor, and got both anchors ready to be let go. At 5 p.m. shortened sail, Clarke’s Island bearing north, distance about five miles. At half past 5 p.m. rounded the west point of Clarke’s Island, ship close to the wind, under both fore and main topsails and foresail, thinking to bring up in the right harbour, but found the ship surrounded with rocks, there not being room to wear or stay, let go the anchor. A few seconds after the anchor was gone the vessel struck a sunken rock, the ship payed off the rock, and commenced going down head foremost. I ordered the boat to be cut away and all hands to get into her. One minute after we got into the boat she sank. We all left the ship as we stood upright for we could save nothing. We all proceeded ashore in the boat and hauled her up, all landing safe, the weather being thick and hazy at the time and heavy showers of rain.” The vessel went down so suddenly that the captain’s wife, who was on board, had no time to even secure a bonnet for herself or their child. Nothing was saved. When down, the bark’s gallant-yard was just barely above water. Captain James of the Scotia, five days out from Geelong, humanely stopped his vessel and took the Litherland‘s crew, the captain, his wife and child from the island, and, kindly administering to their wants, carried them on to port. 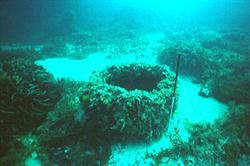 One of 3 trypots found on Litherland. They had been used for boiling oil out of whale blubber

The Litherland was discovered by divers in 1983, and was declared a protected site under the Commonwealth Historic Shipwrecks Act. Three giant, iron trypots (used for boiling oil out of whale blubber); two anchors; a windlass; and some concreted iron work, spread over an area about 150 feet long by 50 feet wide, is almost all that’s left of the wreck. The wreck is in 32 to 42 feet of water. (Note by ELS: Because we should encourage people to report their discoveries, if anyone knows who first found this wreck, I will be more than happy to credit them here.)

1864: The barque Benledi, bound “from Glasgow for Nassau, was totally lost on a reef off Nassau” on April 23, 1864. It was also reported as bound “from Cardiff for Nassau” and as “wrecked on Silver Bar.” 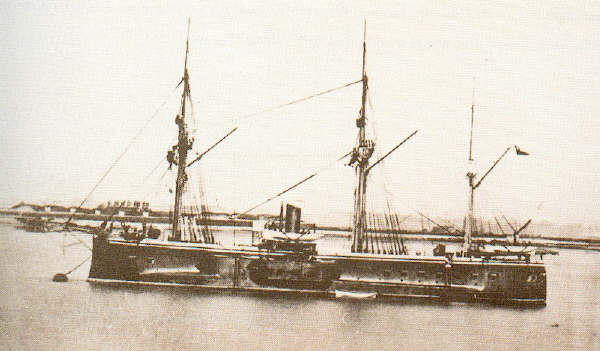 1891: During the 1891 Chilean Civil War, the Chilean Navy Almirante Cochrane-class central battery ship Blanco Encalada was sunk by a torpedo gunboat in the port of Caldera, Chile, on April 23, 1891.

1904: The American vessel Arthur McArdle was totally wrecked on Egg Island about 1:30 a.m. on April 23, 1904. (Note by ELS: There is some obvious confusion about the history and location of this wreck. Project Eleuthera shows the Arthur McArdle as wrecked on Egg Island Reef in the Bahamas, but they describe her as an American tanker with a cargo of crude oil. A U.S. government report published within a year of her loss describes her as a schooner and shows her as lost at “Egg Island, Bermuda.” I was unable to find anything on a Bermuda island by that name. From experience I know that American record keepers often confused the Bahamas on Bermuda, so, I suspect the government report should have read Bahamas and not Bermuda. However, other the government records are quite explicit about the Arthur McArdle. She was definitely a schooner.)

The schooner Arthur McArdle was built in 1891 at Camden, New Jersey, and was owned in Philadelphia, Pennsylvania. She carried a crew of seven. Her official number was 106887 and her signal letters were KJVC. She had a wood hull, was 894 gross tons, 767 net tons, 186 feet in length, 38 feet in breadth, 18.8 feet in depth of hull.

1914: The Belgian coasting vessel Loire was shipwrecked in the English Channel off Sept Îles, on April 23, 1914. Her crew survived. Sept Îles is a small archipelago off the north coast of Brittany, France.

1915: The Russian coaster Fråck was scuttled on April 23, 1916, in the Baltic Sea off the Flöttjan Lighthouse by the Imperial German submarine U-26. Her crew survived. The Fråck, originally named Helge, was built by Henderson, Coulborn & Co., Renfrew in 1869 and was 849 tons.

1916: On April 23, 1916, the Royal British Navy trawler Lena Melling struck a mine and was sunk in the North Sea near the Elbow Light Buoy off Broadstairs, Kent, United Kingdom. There were three survivors. Eleven of her crew were lost. The Lena Melling was being built as a privately owned fishing trawler by Cochrane & Sons, Ltd., at Selby, when she was requisitioned and fitted out as a minesweeper in 1915. Note: The mine had been laid by UC-7, which was an Imperial German navy mine-laying submarine that was credited with sinking 12 warships and 20 merchant ships and damaging two others.

1916: The British cargo ship Parisiana, 4,763 gross tons, was torpedoed and sunk on April 23, 1916, by the German submarine U-19 in the Atlantic Ocean 82 nautical miles west of Ouessant, Finistère, France. Her crew survived. She bound from London, England, to Newport News, Virginia, with a cargo of manure and Fuller Earth. Note: Fuller’s earth is any clay material that has the capability to decolorize oil or other liquids without chemical treatment. Fuller’s earth typically consists of palygorskite or bentonite.

1917: The Norwegian barque Acadian was captured and scuttled by the Imperial German submarine U-52, on April 23, 1916, in the Atlantic Ocean 65 nautical miles north west of Tory Island, County Donegal, United Kingdom. The Acadian’s crew survived.

1917: The British coaster Auriac was shelled and sunk on April 23, 1916, by the Imperial German submarine UC-44 in the North Sea, 5 nautical miles east south east of St Abb’s Head, Berwickshire, United Kingdom, with the loss of one crew member.

1918: The HMS Brilliant and HMS Serius ran on a sandbank on April 23, 1918, and had to be destroyed by their own crews just outside the mouth of Belgium’s Ostend harbour. The intent had been to scuttle the two vessels in the mouth of the harbor where they might prevent the exit of German U-boats and other German vessels from Bruges to the North Sea, but German countermeasures had been too effective, and the cruisers never reached their intended position.

Both HMS Brilliant and HMS Serius had been built as Apollo-class British cruisers but had been converted to converted to lightly armed mine-layers in 1914. Each was 3,600 tons, 314 feet in length, 43 feet 6 inches in breadth with a draft of 17 feet 6 inches. The wrecks were broken up after the war.

1945: On April 23, 1845 the German submarine U-183 was torpedoed in the Java Sea off the island of Borneo by the American submarine Besugo, which gave the location as latitude 04°57′ south, longitude 112°52′ east. Only 1 man survived from out of the submarine’s crew of 54. (Note by ELS: Although there is no absolute proof, there is almost no question that this large submarine had a cargo of gold bullion aboard. The real question is not — if she carried gold, but how much she was carrying.)

NOTE: This is by no means meant to be a complete list of the vessels lost on April 23, as there have been thousands of ships lost for every day of the year. All of the above entries have been edited (shortened) and come from various editions of Spence’s List™. The original lists usually give additional data and sources. Those lists are being updated and are or will be made available for a fee elsewhere on this site.