The April 22 list of Today’s Shipwrecks™ includes everything from British warships and merchant vessels lost during the age of sail to 19th and 20th century steamers. But the mystery of the day is, what really went down on the Amerika in 1943? Was it gold and silver? If you are seeing this in a post, other than on Shipwrecks.com, read more about these wrecks and other ships lost on an April 22 at http://shipwrecks.com/shipwrecks-of-april-22/.

1786: His British Majesty’s armed store-ship Cyrus, commanded by A. Davidson, was lost at Barbados on on April 22, 1786. She had been purchased in 1771 and was armed with ten guns.

Note by ELS: It is not clear whether she was actually wrecked that day, as various books and online sources report, or if that was merely the day of the court martial of Lieutenant John Johnson for her loss.

1797: The British frigate Magicienne, Captain Ricketts, attacked a small fleet belonging to the Haitian insurgents around April 22, 1797, in the Baie des Carcasses, Haiti, sank three of their barges, and captured two schooners, all loaded with cannon and military stores meant for the siege of Irois.

1807: The sloop Phoenix, Captain James Lesesne, of Georgetown, bound to Charleston, South Carolina, with a cargo of lumber and staves, foundered on April 22, 1807, and was afterwards reported as having been seen bottom upwards off the Charleston Bar. The captain and crew (three in number) all drowned and some of the bodies washed ashore on Raccoon Key near Cape Romain, South Carolina, where they were buried.

Beginning in the 1790s, the British navy procured large numbers of these Bermudian vessels, some ordered directly from Bermudian builders, some bought up from commercial trade. They were also used for reconnaissance, chasing slave smugglers, and other uses. The vessel shown may be the earliest recorded example of the modern, triangular Bermuda rig on a multiple-masted vessel, though the rig had been used in Bermuda for some time before that.

1813: On April 22, 1813 when HMS Weazle, 18 guns, Commander James Black, was four miles east northeast of the island of Zirona in the Adriatic Sea, she encountered a convoy close to the shore making for the Croatian ports of Tran and Marina. Weazle gave chase, but the ships split up with most of the vessels, including ten gunboats, heading for Boscaline Bay. Weazle chased the gunboats, which around six in the morning formed a line of battle, hoisted the French flag, and proceeded to fire on her.

In the ensuing action in Bossolina (or Boscaline) Bay, the French lost one gunboat sunk, two driven on shore, and three surrendered. However, four more enemy gunboats joined the action, as did shore batteries and troops on shore. Weazle further succeeded in burning and destroying eight more vessels belonging to the convoy.

The next morning the action resumed as Weazle, holed, taking on water, and with all her sails and rigging destroyed, slowly attempted to warp out of range. Weazle was unable to disengage until the late afternoon of 24 April.

Weazle had lost five men killed and twenty-four wounded, with slightly over half the wounded being severely wounded, and with most of the casualties having occurred on the first day. In 1847 the Admiralty awarded the Naval General Service Medal with clasp “Weasel 22 April 1813” to all surviving claimants from the action.

1816: The brig Triten, of Boston, Captain Stevens, bound for Washington, with a load of ship timber, grounded and bilged on April 22, 1816, while attempting to cross the bar at Stono Inlet, South Carolina. The captain and crew landed on the beach at Cole’s Island, South Carolina, and succeeded in saving some rigging, etc.

1819: The vessel Constantia, Captain Johnson, from Port-au-Prince to Le Havre, ran ashore on Ginger Cay in the Bahamas on April 22, 1819. Her cargo was saved.

1822: The steamboat Commerce, Captain Bowman, which arrived at Hamburg, South Carolina, on the Savannah River, on April 22, 1822, reported having seen “wrecks of various houses and boats” in the river, but had rendered no assistance to a large boat in need of a tow “lest he should infringe the chartered rights of the Team and Steamboat Companies.”

1825: The steamboat Henry Shultz, Captain Lubbock, which arrived at Augusta, Georgia, from Charleston, South Carolina, on April 22, 1825, was discovered to be on fire in both holds after she had landed only a few articles from her deck. The people of Augusta rushed to her aid with their fire engines and it looked as though she would be saved, except Captain Lubbock, knowing she carried a considerable quantity of powder on board, warned the people of the danger and they abandoned their efforts. She burnt to the water’s edge and shortly thereafter, blew up. Captain Lubbock and one bystander were injured in the explosion.

Note by ELS: Don’t forget, those are 1825 values when gold was approximately $20 an ounce. Its over 70 times that today. That’s not to suggest there was any gold aboard, but simply to give an idea of the value of owner’s loss.

She was 208 tons and was built at Philadelphia, Pennsylvania in 1824. Her first home port was Charleston, South Carolina, and she was a regular trader between there and Augusta, with stops at Beaufort and Savannah. At the time of her first arrival at Charleston she was described as a “spacious, well finished, fast sailing vessel, capable of carrying 800 bales of cotton • • • her machinery constructed upon the most approved principles, and peculiarly calculated to ensure protection to property and person.”

1854: The clipper ship Golden Fleece, 968 tons, bound from San Francisco to Manilla, was wrecked at the rocks near Fort Point on April 22, 1854, as it was exiting Golden Gate.

The California Daily Alta wrote that “lying broadside or to the rocks ••• bilged and full of water, her mainmast is gone, also the fore and main top mast”. On April 22, 1854, the wreck was sold in a public auction and “The purchasers of the wreck are busily engaged stripping her of everything moveable, at the same time preparations are being made to raise her… The sails, rigging, guns, etc., saved by the consignee of the ship, were sold at auction yesterday, the two brass pieces (guns) bringing $580.”

1865: Admiral David D. Porter’s flagship, the USS Black Hawk, exploded her magazine and sank in the Ohio River three miles above Cairo, Illinois, on April 22, 1865, after a fire started in her oil locker. Her location was also described as opposite Mound City. 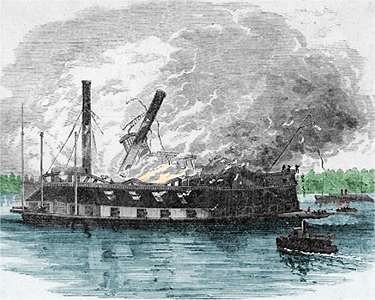 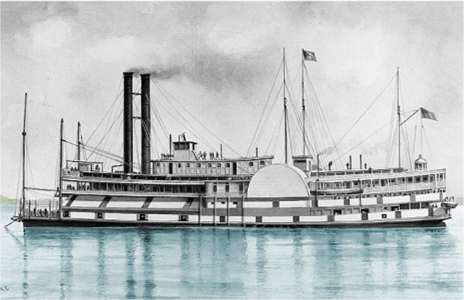 Despite the fact that government records show the wreck of the Black Hawk as raised and sold at St. Louis, Missouri, in April of 1867, by the Dalson Wrecking Company, with the government receiving $389.05 (one fourth of the proceeds), other accounts shows that the snagboat Albert “got” the wreck of the Black Hawk in October of 1872, and that the job took about one month.

1873: On April 22, 1873, the officers and crew of the British steamer Dunraven, incorrectly believing they were further up the Gulf of Suez than they really were, sailed their ship straight onto a reef. According to one account, the ship stuck fast and the crew worked for 14 hours to free her only to have her slide off, capsize and sink in about 80 to 100 feet of water. Another report says she held fast on the reef for several days, then caught fire, burned for 13 hours and capsized, sliding down the reef to where she lies today. The 25 man crew was rescued by local fishermen. She had been bound from Bombay, India, with a cargo of spices, cotton and muslin.

The wreck is south of Beacon Rock at the southern end of the Ras Mohammed National Park on the outside of Sha’ab Mahmoud, Egypt, at GPS coordinates 27.4215°N, 34.0730°E.

The Dunraven was built in 1873 by Charles Mitchell & Company, at Newcastle upon Tyne. She was owned by Watson & Milburn. Rigged for both sail and steam, she was 1,600 gross tons and about 268 feet in length and 32 feet in breadth.

Like many wrecks, she was known to local fishermen but they had no idea as to her true identity, and the site only became known to the public after a German oil company employee learned of it in the late 1970s. The wreck was finally identified when a piece of the ship’s china was found with its name on it.

The wreck is now a popular dive site. Artifacts such as Hamilton bottles, mugs, plates and even jars of gooseberries and rhubarb have been found.

Here are some links to a number of videos of the wreck.

1916: The Chinese Army transport ship Hsin Yu, with over a thousand enlisted men and officers on board, accidentally collided with the the Chinese navy cruiser Hai Yung on April 22, 1916. The only survivors were a foreign engineer, nine sailors and twenty soldiers. The 1,629 ton ship had been built in 1889 and served during World War I. (Note: The date of this disaster is frequently listed incorrectly as “August 29, 1916.”)

1917: The American three-masted schooner Woodward Abrahams was sunk by the German submarine U-43 in the Atlantic Ocean 407 nautical miles west of the Fastnet Rock. Her crew survived. She was built at Waldoboro, Maine, in 1881 for a crew of seven. Her official number was 80852 and her home port was Boston, Massachusetts. She was 166 feet in length, 35 feet in breadth and 16.1 feet in depth of hold, and was 744 gross tons and 676 net tons.

1943: The British freighter Amerika, 10,218 tons, bound from Halifax, which had joined convoy HX-234, out of New York, was in latitude 57°30′ north, longitude 42°50′ west was struck by torpedoes fired from the German submarine U-306, commanded by Caus von Trotha, on April 22, 1943. She sank instantly. Her cargo consisted of almost 9,000 tons of commercial and military cargo including metals, which weren’t specified in source records, as well as 200 bags of mail. There were also two heavy packages marked secret that were locked in the captain’s safe.

Note by ELS: Since, iron, copper, brass, tin, etc., were commonly identified, the question is what were the metals that weren’t identified? Could the metals have been a shipment of gold or silver that was trying to concealed? What was in the heavy packages placed in the safe? And finally, since the mails were often used for shipping money, exactly what was in the mail? All of these are reasonable questions.

The Amerika was built in Copenhagen in 1930 and was diesel powered. She was 10,218 gross tons and approximately 444 feet in length, 62 feet in breadth and 28 feet in depth of hold. In 1940, she had been transferred to the Ministry of War Transport, and was operated by United Baltic Corporation, London.

1947: “The Honduran boat Viator, Captain Howard C. Nickerson, bound to Miami from Haiti, with 8,000 stems of bananas, caught fire on April 22, 1947, near Cay Lobos, Bahamas. The roaring flames spread so quickly the crew couldn’t get to the engines to set her down, and they had to abandon her while she still “plowed ahead at 10 knots.” The lifeboat upset as it was launched throwing all hands into the sea. The lifeboat was cut free and was righted by the men who bailed her out with their hands, “as the Viator, now a mass of flames, sailed away from them.” “Four sharks swam up, nuzzled the boat, bit at the rudder and terrified the men who feared the little craft would be upset.” As the sharks swam around the lifeboat, the men watched the Viator sink. The Viator was of Honduran registry and was manned by Americans from Miami. They were rescued by the banana boat Milagro do Cristis and carried to Miami.

NOTE: This is by no means meant to be a complete list of the vessels lost on April 22, as there have been thousands of ships lost for every day of the year. All of the above entries have been edited (shortened) and come from various editions of Spence’s List™. The original lists usually give additional data and sources. Those lists are being updated and are or will be made available for a fee elsewhere on this site.