The April 21 post for Today’s Shipwrecks™ includes a selection of wrecks from the 18th through the 20th century in places as diverse as the Atlantic, the Great Lakes, and the North Sea. They include everything from Spanish merchant ships to British armed schooners and brigs, to German torpedo boats and submarines. If you are seeing this in a post, other than on Shipwrecks.com, read more about these wrecks and other ships lost on an April 21 at http://shipwrecks.com/shipwrecks-of-april-21/.

1741: Lloyd’s List of April 21, 1741, reported the vessel Woolford, Captain Kenlock, which sailed with HMS Norwich, from Jamaica for London, was lost on the “Coast of Carolina.” An advertisement in the South Carolina Gazette of March 5, 1741, read: “Whereas the good Ship the Woolford, John Kinloch commander, was unluckily stranded on Cape Romain Shoals, (South Carolina), the said Commander is apprehensive that since he was obliged to leave her, to apply for Assistance from Charlestown, she is beat to Pieces by the Violence of the Weather. This is to forewarn all persons whosoever, not to harbor or conceal any Part of the said Ship’s Cargo. Some Part thereof having already been seized in Charlestown by the said Commander, for which the Venders and Purloiners are at present under Prosecution in the Court of Vice Admiralty; all Persons who receive any of the said Goods, are desired to inform the Officers of His Majesty’s Customs of the same, (who are in that case appointed,) or Mr. William Wallace Merchant, otherwise they may expect the like Prosecution from John Kinloch.” Note by ELS: This ship wasn’t lost on April 21, but it was one of the shipwrecks that people read about on that day. I am mentioning it in part because I already have the ownership rights to a number of shipwrecks that I discovered off Cape Romain, and perhaps this is one of them. I would love to find a bell with her name. If you have any information on this wreck or on any other wrecks at Cape Romain, I would sure like to hear from you. Please email me at [email protected]

1776: On April 21, 1776, the British armed schooner Hinchinbrook sailed over Sunbury Bar and burned a brigantine, which was being loaded with lumber in a creek near Medway, Georgia.

HMS Hinchinbrook was the former French privateer Astrée, which the British captured in 1778 and taken into the Royal Navy as a 28-gun frigate of the sixth-rate. She was lost on January 19, 1782 while trying to get to St Anne’s Bay, Jamaica where she ran aground on a reef east of that harbor.

1779: A Spanish brig from Havana, “with 61 pipes of rum and upwards of 200 chests of sugar, was cast away upon a shoal” near Hilton Head Island, South Carolina, on April 21, 1779. Only a small part of the brig’s cargo was saved. Note by ELS: Sugar was a valuable cargo, as was rum, and I would expect this ship to have carried a fair amount of money in the form of gold or silver coins. I am hoping this is one of a number of shipwrecks I have found in that general area.

1801: The vessel Dispatch, Captain Ramsay, bound from Nevis to New England, was lost on Bermuda on April 21, 1801. Her crew and part of the cargo was saved.

1822: HMS Confiance, 18 guns, commanded by William Thomas Morgan, was wrecked on April 21, 1822, between Moyin Head and Three Castle Head, near Crookhaven, Ireland with the loss of all her crew.

The Confiance was a Cruizer-class, brig-sloop launched in 1813. The Cruizer class was a class of brig rigged sloops of the Royal Navy. She would have carried 121 men and officers, and would have been armed with two 6-pounder bow guns and sixteen 32-pounder carronades.

1832: The Sterlingshire, Captain Sullivan, bound from Liverpool to Havana, “struck on Ginger Key” (Ginger Cay), on April 21, 1832, and on April 25 “had 6 feet of water in her hold.” She was got after “throwing part of her cargo overboard,” and arrived at Havana on May 7. “The remainder of the cargo, almost all in a damaged state, has been transferred to a vessel in the quarantine station. His Majesty’s ship Pincher brought in on the 15th instant (May) a number of articles, which were thrown overboard by the Stirlingshire.”

1855: The British bark Clermont, Captain Soley, from New York, dragged her anchor and went ashore on Tybee Beach, Georgia, in the gale of April 21, 1855.

The British bark Glasgow, Captain Ward, which had been cleared for London, was driven ashore in Cockspur Roads, Georgia, in the same gale.

Note: Both of these vessels were expected to be got off, but such expectations were quite frequently wrong. And, when you see multiple vessels being driven ashore in a gale there is always the possibility of more , as evidenced by the next entry. Even if there aren’t more reported for that immediate area, there may have been more near ports up or down the coast, so further research is always a good idea, especially in local papers.

1855: The ship Southport, Captain William Wilson, bound from New York to Savannah, got ashore on the Knoll of the north point of Tybee Beach, Georgia, during the gale of April 21, 1855. It was believed that she would be a total loss and it was reported that the tide “ebbs and flows through her.”

1856: The passenger/freight steamer Northerner, Captain Cole, was bound from Cleveland for Saginaw, when was struck by the steamer Forest Queen, Captain Wadsworth, on Lake Huron during the night of April 21, 1856. She was hit on her port side about 25 from her stern. Cut nearly in two, she sank in minutes with the loss of of her second engineer and eleven passengers. A total of one hundred and thirty-two people were saved.

Its hard to imagine the fear that must have been felt by the passengers who were awakened from their sleep. Mr. John Huff was awakened by the noise of the collision, and immediately gathered his wife and seven children together, pushing them towards the main deck. After reaching the deck he realized that one of his children was missing. On returning below, he found the child floating in the water, then already two or more feet deep. He grabbed the child and got it safe on deck just as his youngest child was swept overboard. He plunged into the water, swimming some thirty feet, and succeeded in saving that child too. He, together with all those he had struggled so hard to save, were finally gotten aboard the Forest Queen.

Her location was described as in twenty-five feet of water about four miles above the Fort Gratiot light, at Port Huron, and one mile and a half miles from the Michigan shore. According to reports published immediately after her sinking, no baggage or freight of any kind was saved. The loss was reported as $20,000 on the vessel, which had just been purchased, and $3,000 on her cargo. She had about fifty tons of mixed freight. A good portion of it was for Messrs. Beech, Moore & Co., of Saginaw. 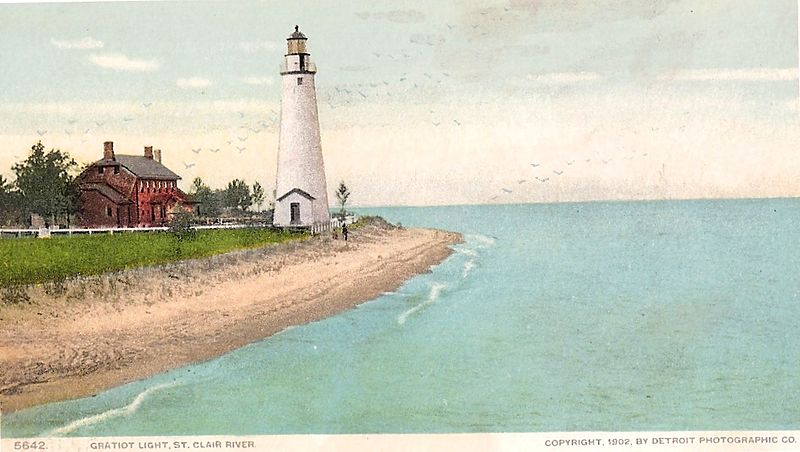 1902 postcard of the Fort Gratiot light, Port Huron, Michigan. The Northerner sank 4 miles above the light, and 1.5 miles from shore.

The Northerner was owned by her master, Captain Darius Cole, of Saginaw, Michigan. Cole’s company and that of Eber Ward, owner of the Forest Queen, were rivals.

She was built in 1851 by Samuel W. Turner at Ohio City, Ohio. She was a side wheel steamer, with a walking beam engine, and one boiler, was 514.75 gross tons and approximately 187 feet in length, 27 feet in breadth and 11 feet in depth of hold.

She had a wood hull and no figurehead. Her official number was 61993. Her home port was Halifax, Nova Scotia. Her tonnage was given as 149 gross and 145 net.

1897: The British steamer Brankelow, of Liverpool, Captain David Stewart, which had been chartered by the Russian government, went ashore on Loe Bar, Cornwall during a gale on April 21, 1897, while bound from Cardiff, Wales, for Kronstadt, Russia. She was carrying 3,000 tons of coal, which was salvaged along with her engines. According to the subsequent board of trade report, a Captain William Simpson, who was a close friend and colleague of Captain Stewart, had died suddenly at the Imperial Hotel in Cardiff. After registering Simpson’s death, Captain Stewart set sail with a number of his crew, who had sailed many times with Captain Simpson. When the wreck took place, the crew were having a wake for Simpson, and all were drunk, including Captain Stewart who was below deck when the steamer went ashore. As a result, David Stewart’s Master’s ticket was temporarily suspended.

1914: The British ketch Edith was sunk in a collision with the British vessel Thirlby in the Bristol Channel on April 21 1914. One crew member was lost. The survivors were rescued by the Thirlby.

Note: U-22 was one of 329 submarines serving in the Imperial German Navy in World War I. She was primarily engaged in anti-commerce missions and sank a total of 43 ships.

1916: The British cargo ship Feliciana was torpedoed and sunk in the Atlantic on April 21, 1916, about 67 nautical miles north northwest of the Fastnet Rock by the German submarine U-19. Her crew survived.

1917: The British tanker Telena was torpedoed and sunk in the Atlantic Ocean 170 nautical miles west north west of the Fastnet Rock by the German submarine U-61 on April 21, 1917. Her crew survived.

1917: The French barque Ville de Dieppe was shelled and sunk in the Bay of Biscay west of the Île d’Oléron, Charente-Maritime, on April 21, 1917.

1917: Two German torpedo boats were sunk in the Dover Strait during the Battle of Dover Strait on April 21, 1917. 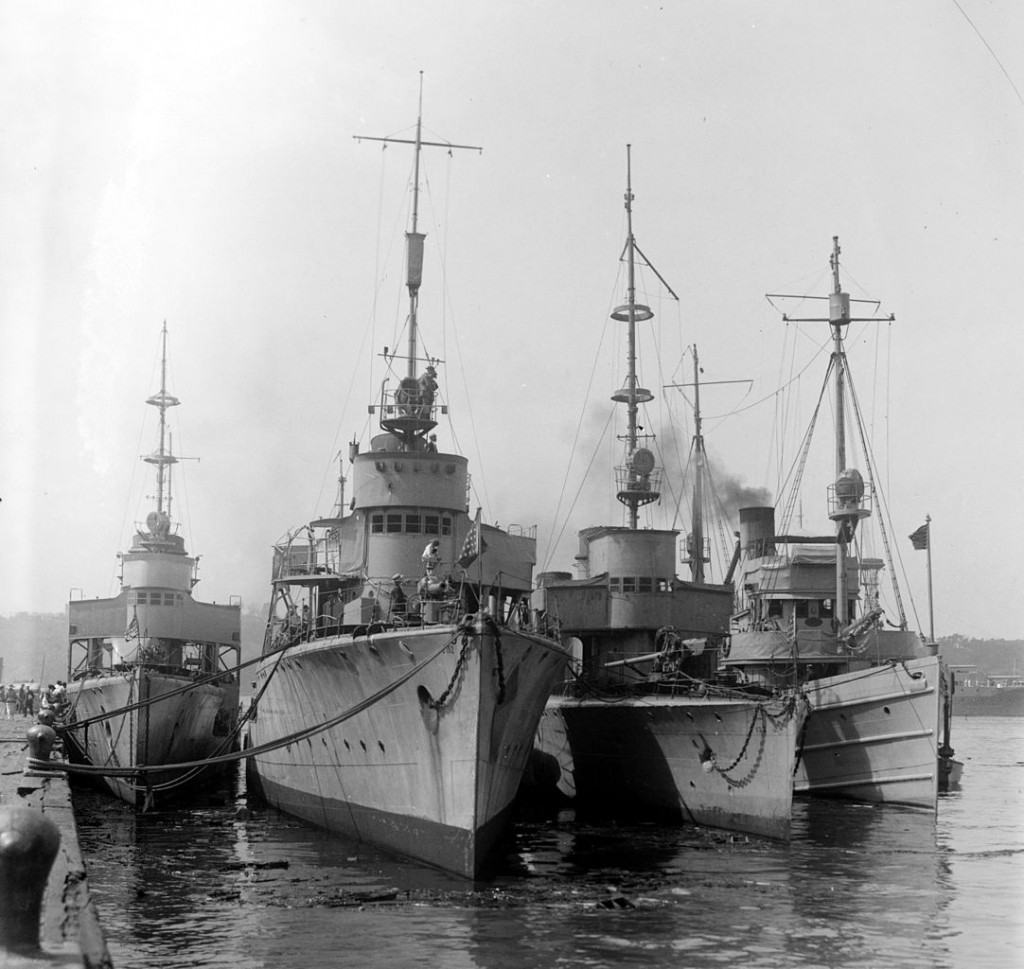 The twoGerman torpedo boats that were sunk were:
• SMS G42, which was rammed by HMS Broke. After ramming her, close-quarters battle broke out between the two crews until HMS Broke disengaged. SMS G42 sank and lost 36 of her crew of 83. She was a Großes Torpedoboot 1913-class, torpedo boat of 1,051 tons. She was armed with three 3.4 in (86 mm) guns, six 500 mm torpedo tubes, and twenty-four mines.

NOTE: This is by no means meant to be a complete list of the vessels lost on April 21, as there have been thousands of ships lost for every day of the year. All of the above entries have been edited (shortened) and come from various editions of Spence’s List™. The original lists usually give additional data and sources. Those lists are being updated and are or will be made available for a fee elsewhere on this site.