Today’s shipwrecks include a Union Army transport and a couple of sailing vessels destroyed for attempting to run the Federal blockade of the south, as well as other vessels from earlier and later time periods. They include a British submarine and freighter, both sunk by the same German submarine during WWII, within just hours of each other. If you are seeing this in a post, other than on Shipwrecks.com, read more about these wrecks and other ships lost on an April 18 at http://shipwrecks.com/shipwrecks-of-april-18/.

1820: The sloop Henry, Captain Bradford, two days from Charleston, South Carolina, in coming through Cockspur, Savannah River, Georgia, got ashore on April 18, 1820, and was lost.

1830: On April 18, 1830, the Catherine M’Donald, Captain Williamson, bound from Mobile to Liverpool “was driven on the Little Bahama Bank during a heavy gale, and lost an anchor and part of a cable.” She managed to get off and arrived at Liverpool on the 19th of May. She also lost her windlass and bits. On April 21st she spoke the George Canning, from Jamaica, which, on the same day in the same gale, had been “driven on Western Reef, and beat over it, but lost both anchors, windlass, and bits.”

1854: On April 18, 1854, the American ship Robert H. Lane, of 1,140 tons, which got “on shore at Berry Islands” on March 30, entered Nassau, having got off by the wreckers. $13,000 was offered for the service previous to the attempt being made, but the proposal was not accepted. Her captain intended to take her to New York instead of to her port of documentation, her condition being such as to enable her to proceed to New York without undergoing any repairs at Nassau. The Chamber of Commerce of Nassau awarded the wreckers $50,000 for saving the ship. (Note by ELS: This has been included in part to give you an idea of how valuable a merchant ship might be. If paid for in gold, the salvage award was today’s equivalent of $3,500,000.)

1863: The British schooner Inez, 4 tons, of and from Nassau, New Providence, Bahamas, Captain George R. Edget, with salt and shoe thread, was captured by two boats from the United States bark Gem of the Sea, south of Indian River Inlet, Florida, on April 18, 1863, and brought to where the bark was anchored 1.5 miles offshore of the Inlet and afterwards destroyed for violation of the blockade.

1864: The schooner Good Hope, 150 tons, laden with salt and a few dry goods, was run ashore by her crew near the mouth of the Homosassa River, Florida, to avoid capture by an armed boat from the United States schooner Fox, on April 18, 1864. With night coming on and two Confederate boats seen nearby, the Good Hope was set afire and completely destroyed.

1864: The U.S. Army steamer Bombshell was sunk at her wharf at Plymouth, North Carolina, on April 18, 1864, after having received several shots below the waterline from the Confederates in an earlier trip up the river to Fort Gray the same day. The Bombshell was under the temporary command of Ensign Thomas B. Stokes, who “fought her well,” when she was lost.

The vessel, which was immediately raised and put into service by the Confederates, was recaptured by the U.S.S. Mattabesett on May 5, 1864. By November 27, 1864, official reports describe as hauled up on the mud to keep her from sinking at New Berne, North Carolina (where she was apparently left after the war).

The Bombshell had two inclined, high pressure engines. Her cylinders were about 10″ in diameter and had a 2’9″ piston stroke. The cylinders were placed one on each side of the boiler and were connected at right angles to the shaft of the paddle wheels. She was armed with two rifled 12-pounders, one smooth bore, and one 20-pounder Brooke.

1864: A report made by the Secretary of Navy to the 38th Congress for 1864/1865 included a mention that the Potomac flotilla had captured twenty-two boats up the Rappahannock River, Virginia, on April 18, 1864. The report failed to indicate the disposition of the vessels, and it appears that they may have been destroyed on the spot.

1865: The steam tug Seaboard, 59 tons, which had surrendered to United States naval forces on April 4, 1865, struck the obstructions at Drewry’s Bluff, James River, Virginia, sometime prior to April 18 (or earlier), 1865, and bilged. The officer having her in charge ran her upon the bank just below the obstructions to prevent her from sinking in deep water. Arrangements were being made by the Navy to raise her, when the U.S. Quartermaster at Richmond took possession of her, raised her and sent to Norfolk for repairs.

The Seaboard had a wood hull and was a sidewheel steamer. She was built at Philadelphia, Pennsylvania, in 1859, and her first home port was Norfolk, Virginia.

1911: The Portuguese passenger liner Lusitania was wrecked on Bellows Rock off Cape Point, South Africa at midnight on April 18, 1911, in fog while bound from Lourenco Marques (now Maputo) with twenty-five first-class, fifty-seven second-class and one hundred and twenty-one third-class passengers, and four hundred and seventy-five African laborers. Out of the seven hundred and seventy-four people on board, eight died when a life boat capsized. Two days later the ship slipped off the rock into approximately 120 feet of water to the east of the rock. The Lusitania’s sinking spurred the local authorities to construct a new lighthouse on the Cape Point. 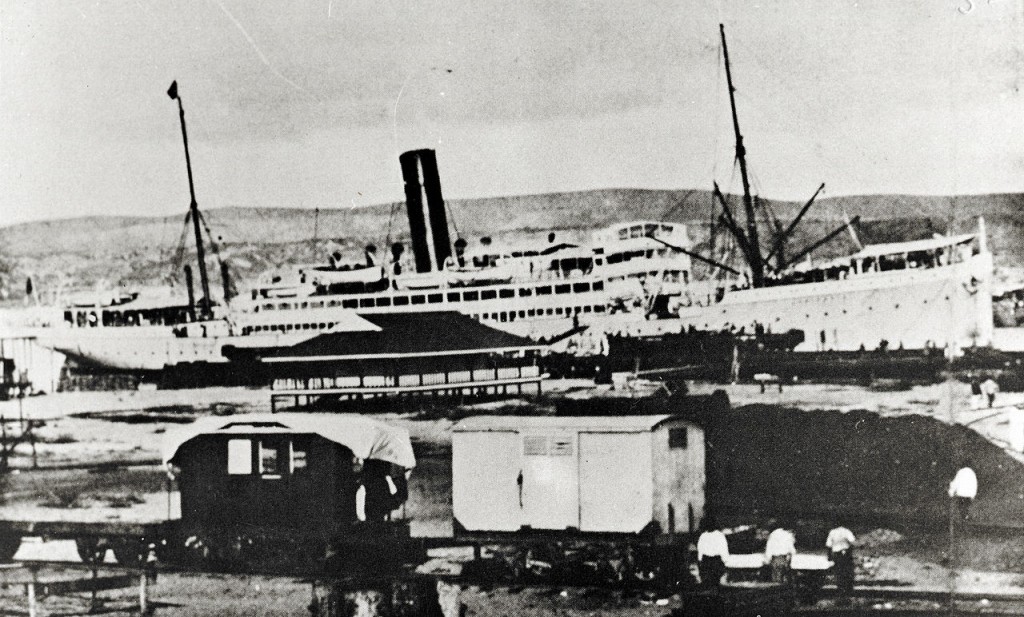 Note: This Lusitania should not be confused with the Cunard ocean liner RMS Lusitania, which was torpedoed by an Imperial German submarine on on May 7, 1915, during the First World War.

1915: The British trawler Vanilla was torpedoed and sunk on April 18, 1915 by an Imperial German submarine in the North Sea approximately 53 nautical miles (98 km) east by south of the United Kingdom’s Inner Dowsing Lightship. Nine lives were lost.

1917: The British freighter Castilian (or Castillian) was torpedoed and sunk, with the loss of ten of her crew, in the Atlantic Ocean, 110 nautical miles northwest by north of Tory Island, County Donegal, Ireland, on April 18, 1917, in latitude 56°20′ north, longitude 10°45′ west, by the German submarine U-61. She was the ex-Umbilo, which had been built in 1890, purchased in 1909 from Bullard, King & Company by Ellerman Lines Ltd. in Liverpool, and renamed Castilian. She was 1923 gross tons, and approximately 267 feet in length, 37 feet in breadth and 16 feet in depth of hold.

1943: The British cargo ship Manaar, bound from Beira, Mozambique, for Durban, South Africa, with 4,400 tons of copper ingots, was hit by two torpedoes fired from the Italian submarine Da Vinci, Captain G. Gazzana, on April 18, 1943, in latitude 30°59′ south, longitude 33°00′ east. (The location has also been reported as latitude 30°55′ south, longitude 33°40′ east.) The first torpedo struck the steamer’s starboard side destroying the second bulkhead, while the second exploded in the No. 4 cargo hold on the port side. Among the survivors was the Manaar’s Second Officer, who was taken prisoner aboard the submarine. At the same time he was seized, another prisoner, captured the previous day from the Dutch ship Sembilan, was “thrown” into one of the Manaar’s lifeboats.

The freighter had been built by William Hamilton & Company in Glasgow, Scotland, the previous year. She was a screw steamer of approximately 8,000 tons, 460 feet in length, and 52 feet in breadth.

The survivors afterwards described the Da Vinci as approximately 300 feet in length, painted dark gray, with a low conning tower and sloping type bow. She had one 4-inch deck gun mounted forward and two machine guns mounted on the aft end of the conning tower.

1943: The 683 ton British submarine HMS P-615 was sunk on April 18, 1943, southwest of Freetown, Sierra Leone, Africa, in an engagement with the German submarine U-123, which was under the command of Oberleutnant zur See Horst von Schroeter. 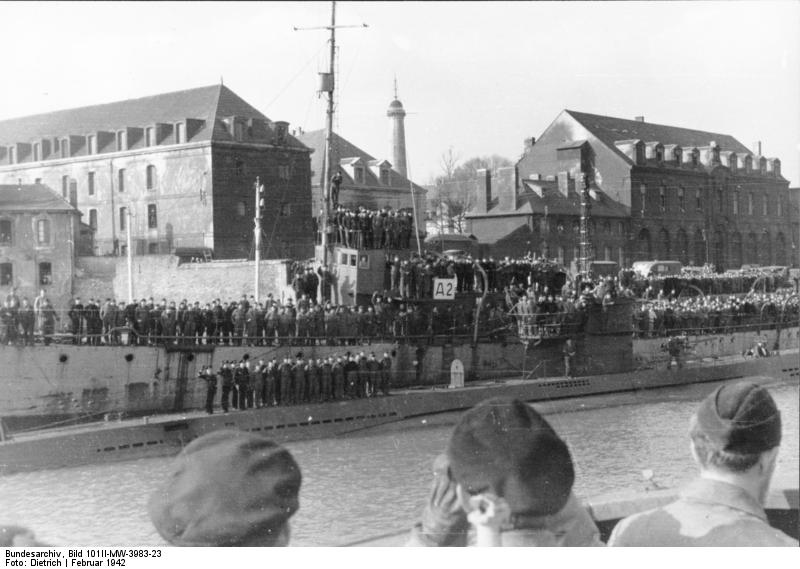 German submarine U-123 at Lorient, France

At 12:39, later the same day, the British vessel Empire Bruce, 7,459 tons, was struck in the stern by a torpedo fired from U-123. The steamer was carrying a cargo of 9,141 tons of linseed from Buenos Aires, Argentina to the United Kingdom via Freetown, Sierra Leone. After further torpedoes were fired at 13:51 and 14:19, the Empire Bruce capsized and sank 100 nautical miles (190 km) in latitude 6°40′ North, longitude 13°17′ West, off Freetown, Sierra Leone. The entire crew of 42, and seven DEMS gunners were rescued by minesweeper HMS MMS 107. They were landed at Freetown the following day.

NOTE: This is by no means meant to be a complete list of the vessels lost on April 18, as there have been thousands of ships lost for every day of the year. All of the above entries have been edited (shortened) and come from various editions of Spence’s List™. The original lists usually give additional data and sources. Those lists are being updated and are or will be made available for a fee elsewhere on this site.