The most tragic ship loss to take place on any April 16 was certainly that of the German steamer Goya in 1945 with almost 7,000 lives. Other losses for this day in history included the French frigate Harmonie in 1797 and the Confederate gunboat Chattahoochee in 1864. And there is even a mystery. Was the SS Lake Michigan carrying silver bullion when she was torpedoed in 1918? If you are seeing this in a post, other than on Shipwrecks.com, read more about these wrecks and other ships lost on an April 16 at http://shipwrecks.com/shipwrecks-of-april-16/.

1797: The French frigate Harmonie, 44 guns, (also shown as the Hermione, 36 guns), was driven ashore and burned by HMS Thunderer, 74 guns, Captain Ogilvy, and HMS Valiant, 74 guns, Captain Crawley, “near Jean Rabel, in San Domingo” on April 16 (or 17), 1797. “It was discovered that she had been sent to sea from Cape François to convey thither a number of captured provision-laden American vessels, which had been collected at Port au Paix and Jean Rabel by French privateers.” The Harmonie was armed with twenty-six 18-pounders, ten 6-pounders and four 36-pounder howitzers.

1812: The ship Carlton, Captain Davis, bound from Virginia to Havana, was lost on Abaco in the Bahamas on April 16, 1812. Her crew and part of her cargo was saved.

1813: The schooner Eliza, Captain Benjamin, bound from Georgetown, South Carolina, to Charleston, with 220 bushel barrels of rice, went ashore on the breakers of DeWees Island, South Carolina, on April 16, 1813, bilged and filled. She was entirely lost. Fifty of the barrels of rice belonged to Charles Pinckney, Esq., and were not insured. It was the second parcel of rice he lost that year by shipwreck. The other being a parcel in Captain Addison’s coaster, which was also bound from Georgetown to Charleston.

1851: The brig Tonquin, Captain Fickett, bound from Cardenas for New york, “was dismasted and abandoned in a sinking state off Gun Key” on April 16, 1851. The crew was taken off by the ship J.C. Humpreys and afterwards put on board the barque A.G. Hill for Boston.

1861: A schooner “name unknown” and crew “supposed to be lost”, was reported as ashore on Hatteras Shoal, North Carolina, on April 16, 1861. It was thought that she was “the War Eagle, from Port-au-Prince for Philadelphia.”

1861: A letter dated at Wilmington, North Carolina, on April 16, 1861, mentioned that the schooner Alice L. Webb, said to have been “bound to the South” from New York, with an assorted cargo was wrecked in the vicinity of Ocracoke and Hatteras, North Carolina.

1861: Although not a shipwreck, this entry is included because it caused a lots of ships to be lost. On April 16, 1861, President Lincoln proclaimed that the “inhabitants of the Southern States” were in a “state of insurrection” and forbade “all commercial intercourse with same.” Lincoln further ordered that after fifteen days “all ships and vessels belonging in whole or in part to any citizen or inhabitant of any (of the rebelling states) found at sea or in any port of the United States” be forfeited to the United States. Lincoln also announced that a blockade of the ports within the rebelling states would be put in place, and that any vessels attempting to leave any of said ports were to be “duly warned by the commander of one of the said blockading vessels, who will indorse (sic) on her register the fact and date of such warning; and if the same vessel shall again attempt to enter or leave the blockaded port, she will be captured.” 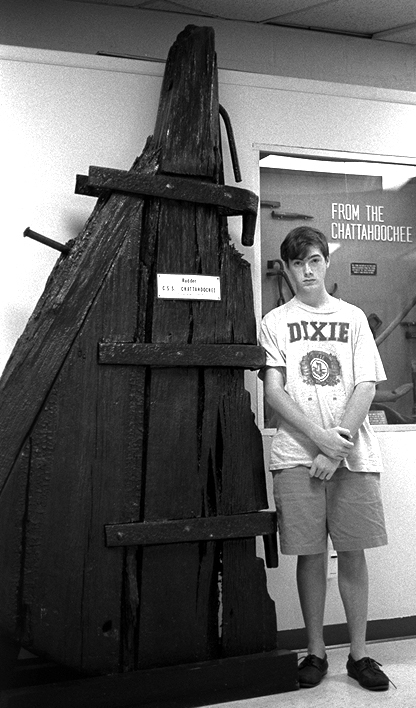 The Chattahoochee was armed with one 9-inch Dahlgren smooth-bore, four 32-pounder smooth-bores of 41-cwt., and one 32-pounder banded rifle. The steamer had a crew of one hundred and twenty men and officers.

A thirty foot stern section (shown below) of the Chattahoochee, complete with steam engines, was raised in 1964, and is currently on display at the James W. Woodruff, Jr. Confederate Naval Museum at Columbus. 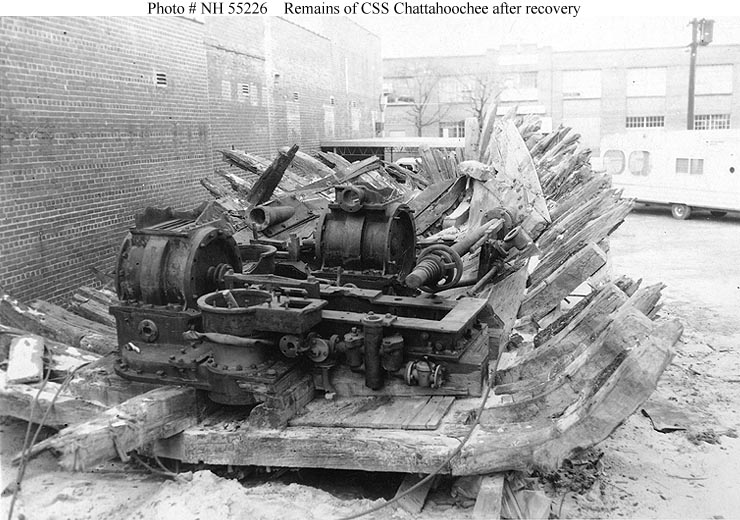 1916: The British freighter Harrovian, bound from New York to Le Havre, France, with a general cargo was attacked on April 16, by a German submarine, which sank her with shells fired from the sub’s 4-inch deck gun. Her crew, which had been given sailing directions by the German commander, all survived. The sinking took place approximately fifty miles from Bishop’s Lighthouse and sixty miles from the Scilly Isles. Her cargo included 2,240,000 pounds of copper bars. Today’s (April 16, 2018) spot price for copper is $3.02, giving the copper a current value of $6,764,800.

A screw steamer capable of 10 knots, she was built in 1915 by Russell & Company in Glasgow, Scotland, for the Thomas Dunlop & Sons Steamship Company. She had a compound, triple expansion steam engine of 436 nominal horsepower, was 5,658 tons, and approximately 419 feet in length, 55 feet in breadth and 27 feet in depth of hull.

1918: The British passenger liner/cargo ship Lake Michigan, bound from Liverpool to Montreal, was torpedoed and sunk 93 miles northwest of Eagle Island on the coast of Irish on April 16, 1818, by the German submarine U-100. The steamer was carrying a “general cargo,” which included tin, copper, and allegedly “a shipment of cement which might actually have been silver bullion in disguise.”

The SS Lake Michigan was built in 1901. She had twin screws, two triple expansion, compound, steam engines, was 9,288 tons and was approximately 465 feet in length and 55 feet in breadth.

1944: On 16 April 1944, when just south of Nantucket Island, the German submarine U-550 located a convoy, which was bound for Great Britain from New York City, and torpedoed the Pan Pennsylvania, one of the largest tankers in the world. The ship quickly caught fire and began to sink. As the vessel settled, the submerged U-boat maneuvered underneath her hull in an effort to hide from the inevitable counterattack by the convoy’s escorts. 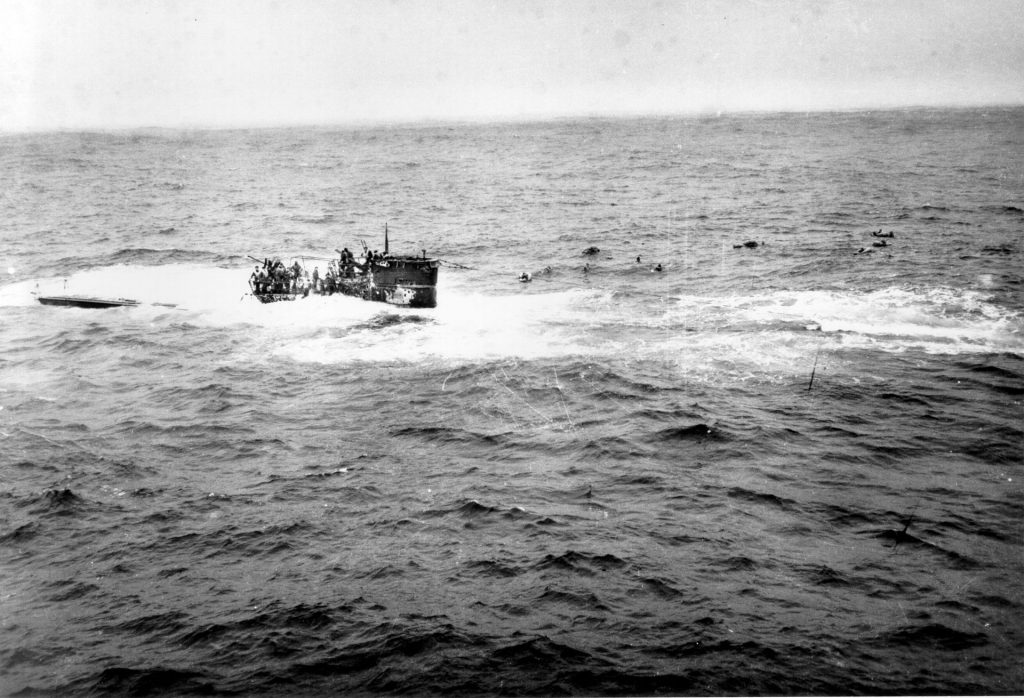 The USS Peterson rescued the tanker’s surviving crew, while the USS Joyce detected the U-boat on sonar as the Germans attempted to escape after hiding beneath the sinking tanker. U-550‘s engineering officer later said, “We waited for your ship to leave; soon we could hear nothing so we thought the escort vessels had gone; but as soon as we started to move – bang!” The Joyce delivered a depth-charge pattern that bracketed the submerged submarine. The depth charges were so well placed, a German reported, that one actually bounced off the U-boat’s deck before it exploded. The depth-charge attack severely damaged U-550 and forced it to the surface. Joyce, Peterson and Gandy circled around the submarine, firing at it. USS Gandy rammed U-550 aft of the sub’s conning tower and Peterson dropped two depth charges, which exploded near the U-boat’s hull. Two men in U-550‘s conning tower were killed.

Meanwhile, U-550‘s captain, Klaus Hänert, tried to reach the observation deck with a surrender flag, but he was wounded by the American shells and fell back down into the U-boat’s control room. Eventually, someone aboard the submarine fired a white flare from the tower hatch.

The captain of the Joyce Robert Wilcox took the flare as a sign of distress and surrender and called a cease fire. Gandy and Peterson ceased firing, too. The U-boat’s crew scrambled on deck to abandon their sinking vessel. About 40 of the Germans entered the 44-degree water and tried to swim to USS Peterson, but the men were not picked up. Joyce rescued 13 of U-550‘s crew, including the captain Klaus Hänert, engineer Hugo Renzmann and doctor Friedrich Torge. One of German seamen later died from wounds received during the fire-fight. Joyce delivered the prisoners of war and Pan Pennsylvania survivors to the authorities in Ireland.

The wreck of U-550 was discovered on July 23, 2012. It lay in over 300 feet or water about 70 nautical miles (130 km; 81 mi) south of Nantucket. A team of six divers, led by New Jersey attorney Joe Mazraani, located the wreck using side-scan sonar after a multi-year search. The team members were Joe Mazraani, Tom Packer, Steve Gatto, Eric Takakjian, Anthony Tedeschi and Brad Sheard. Garry Kozak contracted to conduct sonar operations.

1945: The German transport ship Goya, was sunk in the Baltic Sea by a Soviet submarine on April 16, 1945, while carrying wounded German troops and civilians who were fleeing the advancing Soviet forces in the waning days of World War II in Europe. An estimated 6,800± passengers and crew died, making the sinking of the Goya one of the largest maritime losses of life in either peace or war.

Polish technical divers Grzegorz Dominik and Michal Porada, discovered the wreck almost 250 feet below the surface on August 26, 2002, and salvaged the ship’s compass. The wreck was found to be covered with nets, but otherwise in remarkably good condition.

Because it has been officially declared a war-grave, diving is now forbidden anywhere within 500 meters of the wreck, which unfortunately means that thousands of artifacts that could be used to tell her story will be lost forever.

Note by ELS: According to Wikipedia, in 2003, there was an official “re-discovery” of the wreck by an international scientific expedition, but since the wreck’s location had not been lost in that year’s time, and there was even a boat with divers who were over the wreck when the 2003 expedition boat arrived, I don’t understand how their work could be classed as a discovery. To me, it makes more sense to say that the wreck was “re-visited” in 2003, not “re-discovered.” (But perhaps I am just being overly sensitive. If you recall, some people have tried to ignore my 1970 discovery of the Hunley by saying Clive Cussler discovered it in 1995, even though I had already published the location and that expedition used my maps. I praise what that expedition accomplished, which was digging up enough of the wreck to get the first pictures of it. But, I certainly would never give Cussler or NUMA credit for the discovery, especially since what they did was actually part of a SSCIAA expedition organized and directed by Dr. Mark Newell. So, whatever they accomplished in 1995, its Newell, not Cussler who deserves the real credit for it. And I deserve credit for the actual discovery in 1970. Which is my way of explaining why Dominik and Porada deserve credit for discovering the Goya, not some expedition which came along afterwards.)

NOTE: This is by no means meant to be a complete list of the vessels lost on April 16, as there have been thousands of ships lost for every day of the year. All of the above entries have been edited (shortened) and come from various editions of Spence’s List™. The original lists usually give additional data and sources. Those lists are being updated and are or will be made available for a fee elsewhere on this site.