Cargo of considerable value was lost in some of the shipwrecks that took place on April 13. If you are seeing this in a post, other than on Shipwrecks.com, read more about these wrecks and other ships lost on an April 13 at http://shipwrecks.com/shipwrecks-of-april-13/.

Also lost in the same storm was the British ship of the line, HMS Pembroke, 60 guns, Captain Thomas Fincher, which was lost near Fort St. David. The Pembroke’s location was also described as on Coldroon Point. A survivor later gave the following account: “At 12:00 p.m. the ship struck rocks about two miles from shore, both fore and aft, but abaft very hard. The third lieutenant was near me when the ship first struck bottom, but I saw no more of him afterwards. I kept to the forecastle, accompanied by the boatswain, cook and about eight men more. I got myself lashed to the bitts before the ship took to heel, but shifted myself over to the other side and lashed myself down just as she started pitching over. About 2:00 p.m. I saw the captain’s cabin washed away and by then the ship was laying on her broadside open to the sea.” The Pembroke was launched in 1733. She was a full rigged ship, 144 feet in length, 39 feet in breadth, sixteen feet 5 inches in depth of hold. She carried twenty-four 24-pounder guns on her gundeck, twenty-six 9-pounders on her upper gundeck, eight 6-pounders on her quarterdeck and two 6-pounders on her forecastle. She had foundered in 1745 but had been raised only to be lost in 1749.

Another loss was HMS Namur, 90 guns, Captain Marshal, which was described as “the finest ship of her size belonging to the Navy of England.” Seven hundred and fifty lives were said to have been lost just on the Namur, which “struck on the Coleroon Shoal and went to pieces with the shock.” She was a ship of the line of the second rate (having three gun decks) and displaced around 2,000 tons. Her guns probably consisted of 32-pounders on her gundeck, 18 pounders on the middle deck, and 12-pounders on her upper deck. She also would have carried lighter guns on her forecastle and quarterdeck.

Line drawing of a British Ship of the Line of the Second Rate,
from Ancient and Modern Ships – Part I – “Wooden Sailing Ships” by Sir George Holmes

Many of the survivors of these wrecks were taken prisoner by Mahrattas natives, who stripped them of all their clothing and led them away in chains. They stayed imprisoned until June 1st, when they made their escape by tunneling under the dungeon walls. Three weeks later the survivors finally arrived at Fort Saint David. They were all starving and badly sunburned.

Note One: During this time period, warships were routinely used to transport both government owned and private treasure.

Note Two: From 1748 to 1752, Cuddalore was the capital of the English Possessions on the Coromandal Coast. Fort Saint David was a fort on the River Gadilam and in 1749 was in British hands.

Note Three: Lost the day before (also in the same storm and the same general area as the others), was HMS Apollo, which was variously described as a hospital ship or store ship. For a more detailed account of the Apollo‘s loss, please see the April 12 posting for Today’s Shipwrecks™. 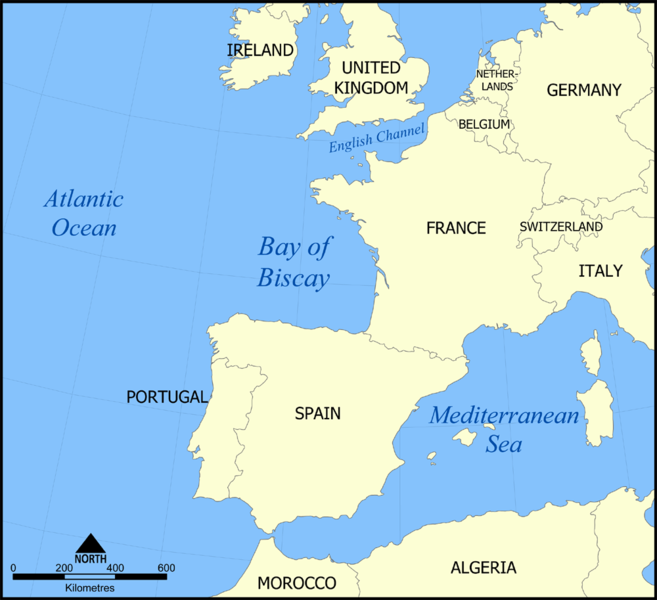 Map showing the Bay of Biscay between France and Spain

1819: A Dutch brig, bound from Hamburg to Havana, was wrecked about April 13, 1819, “on the Grand Caicos.” Bob Marx lists this vessel as having a “valuable cargo of silks.”

1911: The Canadian schooner Foster Rice was totally wrecked at San Domingo on April 13, 1911. She was built in 1899 at Weymouth in Nova Scotia, Canada. She had a wood hull with no figurehead. Her tonnage was reported as 203 gross and 179 net. Her official number was 107602. Her home port was Weymouth, Nova Scotia.

1917: The Uruguayan steamer Gorizia, which had sailed from New York on January 10, 1917, bound for Falmouth, England, and other European ports, was stopped by a German submarine and in the English Channel at 3:45 the afternoon of April 13, 1917. After letting her crew to launch her lifeboats, the Germans boarded her and placed timed bombs on her and scuttled her. There were no casualties. The location of her sinking was described as about 20 miles southwest of Portland Bill.  Her cargo consisted of cotton, brass, tin and machinery.

1917: TheBritish Royal Navy navy trawler HMT Pitstruan struck a mine and sank in the North Sea 3 nautical miles south east of the Noss Head Lighthouse, Shetland Islands on April 13, 1917, with the loss of eleven of her crew.

She attempted to defend herself with her deck guns, and used smoke bombs to conceal her movements, but within an hour and a half she had been hit eight times, her captain was seriously wounded and her guns disabled. After that her crew abandoned ship. The Germans approached and complimented the British on their resistance, gave aid to wounded, and shared weather and sailing information to them to help get them to safety. She steamer was then boarded and scuttled, with the steamer sinking stern first. Her cargo included 594,925 pounds of brass ingots.

1938: The German whaler Sud VI struck a rock and sank off Gundo Point, Gran Canaria, Canary Isles, Portugal with the loss of one of her crew.

1940: On April 13, 1940, the British battleship HMS Warspite and nine destroyers, along with support aircraft, caught the Germans out of position but the German destroyer Bernd von Arnim, commanded by Erich Bey, and four other German destroyers, charged out of Narvik harbor to engage the British ships. Although no hits were scored, the German destroyers did inflict splinter damage on several of the British destroyers. The Bernd von Arnim was able to make a torpedo attack on the British destroyers before being driven off, but her torpedoes all missed. Lack of ammunition forced the German ships to retreat to the Rombaksfjorden (the easternmost branch of the Ofotfjord), east of Narvik, Norway, where they might attempt to ambush pursuing British destroyers. Von Arnim had exhausted her ammunition and she was beached at the head of the fjord. Her crew placed timed demolition charges, abandoned the ship before she blew. By the time the British reached the ship she had rolled over onto her side. The ship’s crew joined the German troops ashore and participated in the campaign until the British evacuated the area in June. 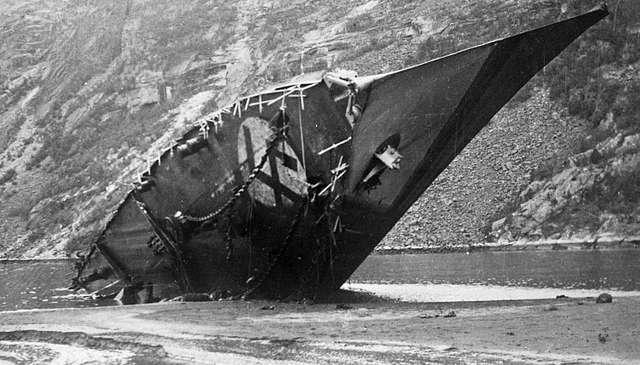 Bow of the Nazi destroyer Z11 Bernd von Arnim, which was scuttled east of Narvik, Norway

1941:  The British cargo steamship SS Corinthic was sunk by German submarine U-124, commanded by Kapitänleutnant Georg-Wilhelm Schulz, at 8°10’N 14°40’W off West Africa in April 1941, with the loss of two of her crew of forty-one. Survivors were rescued by the Dutch motor tanker Malvina and landed at Freetown

The Corinthic was built in 1924, sailed in a number of convoys in the Second World War, and survived an overwhelming German attack on Convoy SC-7 in October of 1940, but her luck did not hold out. Early in 1941 Corinthic left the river port of Rosario in northern Argentina with Captain Townson Ridley as her Master and carrying 7,710 tons of grain. She was southwest of Freetown in Sierra Leone, West Africa, when U-124, hit her with one torpedo at 2229 hours. The damage stopped her but she did not sink, so, 15 minutes later, Schulz fired a second torpedo. It was a dud, so, five minutes after that, he fired a third torpedo, finally sinking the Corinthic. Captain Ridley, 36 officers and men and two DEMS gunners successfully abandoned ship.

1941: The 547 foot long armed merchant cruiser HMS Rajputana, 16,568 gross tons, was torpedoed and sunk four days after parting company with convoy HX 117, she was torpedoed on April 13, 1941, by U-108 near 65°50’N 27°25’W in the Denmark Strait west of Reykjavík, Iceland. She sank over an hour later with the loss of 42 men, including her last civilian captain Commander C.T.O. Richardson. A total of 283 of her crew were saved by the destroyer HMS Legion and ORP Piorun of the Polish Navy, some of them after spending twelve hours in overcrowded lifeboats. Among the survivors was Daniel Lionel Hanington, who later become a rear admiral in the Royal Canadian Navy. in the Denmark Strait by the Nazi submarine U-108 with the loss of 42 of her 325 crew. She was armed with eight 6-inch (152 mm) guns and two 3-inch (76.2 mm) guns.

1942: The British tanker Empire Amethyst, Master Geoffrey Durbridge Potter, bound from New Orleans to the United Kingdom, was struck in her forward section by one of two torpedoes fired from the German submarine U-154, commanded by Walther Kölle, on April 13, 1942. She was carrying 12,000 tons of “motor spirit” and sank in flames. Captain Potter, 45 crew members and one gunner were lost. There were no survivors.

The location of her sinking was described as about forty miles south of Haiti and as at latitude 17°40’ North, longitude 74°50’ West. It was also given as German mapping Grid EC 6299.

The Empire Amethyst was built in 1941 at Furness Shipbuilding Ltd., Haverton Hill-on-Tees, United Kingdom, for the Ministry of War Transport. She was a steel hulled steamer of 8,032 tons. She was owned by Hadley Shipping Co Ltd. of London. Her home port was Middlesbrough.

NOTE: This is by no means meant to be a complete list of the vessels lost on April 13, as there have been thousands of ships lost for every day of the year. All of the above entries have been edited (shortened) and come from various editions of Spence’s List™. The original lists usually give additional data and sources. Those lists are being updated and are or will be made available for a fee elsewhere on this site.