What do a hospital ship, a frigate and a 72 gun warship have in common? They each sank on an April 12. If you are seeing this in a post, other than on Shipwrecks.com, read more about these wrecks and other ships lost on an April 12 at http://shipwrecks.com/shipwrecks-of-april-12/.

1749: The British hospital ship, HMS Apollo, 20 guns, commanded by Lieutenant Robert Wilson, with 350 men aboard, was wrecked a hurricane on the coast of South Arcot (southeast India) on April 12, 1749. She was described as dismasted and “on the point” between Fort David and Cuddalore, which is about 100 miles from Madras. Some records show her as a storeship, and the likelihood is that she served as both. (Note: There were more ships lost in this same hurricane, but since they were apparently lost the next day, look for that information in the April 13 post for Today’s Shipwrecks™)

1798: The British frigate, HMS Lively, 32 guns, Captain James Nicoll Morris, was wrecked on Rota Point, near Cadiz, Spain. HMS Lively had been patrolling the Spanish coast with HMS Seahorse in hopes of intercepting ships trying to enter or leave Cadiz harbor. During the night of April 12, 1798, she grounded and could not be got off. By the morning of April 14th, the Spanish shore batteries started to fire on the British vessels and, since Spanish warships were expected, the English were forced to abandon the ship, after first setting her afire to destroy her. She drew 14 feet when laden, which, when local tides are taken into account, should be a useful clue as to her depth.

1806: HMS Brave, 74 guns, Commander Edmund Boger, foundered, without loss of life, off the Azores in passage from Jamaica to England. She had an exceedingly short stint as a British warship, as she was the ex-French, 74-gun Brave (built in 1795), captured by HMS Donegal on February 6, 1806, but foundered on April 12, 1806, due to the damage that she had sustained during her capture from the French at the Battle of Santo Domingo. The battle of Santo Domingo was the last fleet engagement of the Napoleonic War between French and British capital ships in open water. 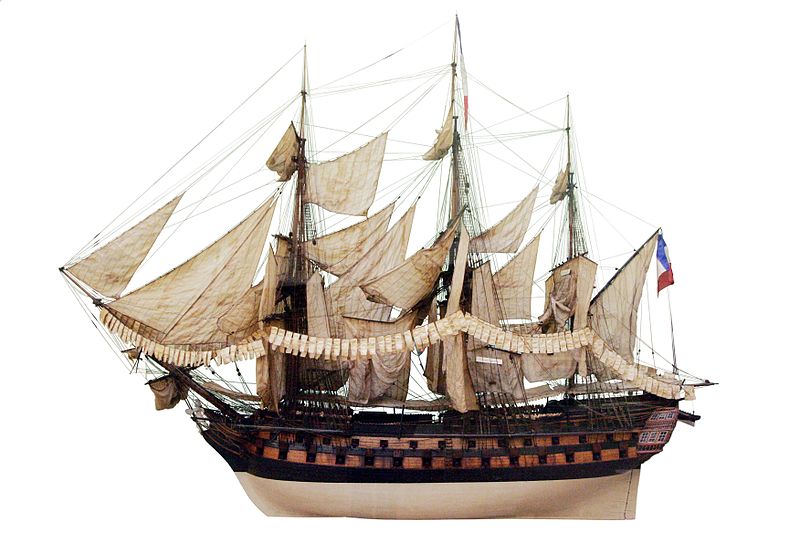 Model of the French ship Achille, sistership to Brave,
photographed by Rama at the Musée national de la Marine

The Brave had been built as the Cassard between August 1793 and May 1795. She was renamed the Dix-Août in 1798 and her name changed to Brave in 1803. She was 2,966 tons (5,260 tons when fully loaded), 183.3 feet in length, 18 feet 11 inches in breadth, and carried up to 26,750 square feet of sail. She carried twenty-eight 36-pounder guns on her lower gundeck, thirty 18-pounders on her upper gundeck, and had sixteen 8-pounder long guns and four 36-pounder carronades distributed between her forecastle and quarter deck.

1838: HMS Rapid, 10 guns, was wrecked off Crete on April 12, 1838. She was commanded by Lieutenant-Commander Hon. Graham Hay St. Vincent de Ros Kinnaird (1811-1838).  Her mate was Augustus John Burton, who not only survived the wreck and went on to increase in rank. (Note: The location is given in some accounts as “off Cape Bon, near Tunis.” The report of the Lieutenant-Commander’s death said he drowned “off Bona.”)

The Rapid was launched in 1829 and was a Cherokee class brig-sloop. Just over 100 of these vessels were built. They were 237 tons, 90′ in length on the gun deck; 73’7±” in length of keel; 24’6″ in breadth; 11′ in depth of hold; and 12’6″ in draft. When used as warships they carried a two 6-pounder bow guns and eight 18-pounder carronades. When used as survey vessels, they just carried six guns. As a class they were much criticized, being popularly known as ‘coffin brigs’, following the loss by wrecking or foundering of a number of them. There seems to have been no particular design fault, but they were considered by many to be somewhat too small for the global duties that were assigned to them. The best known of this class was HMS Beagle, which converted in 1825 into a three-masted exploration vessel for its first exploratory, survey voyage, then considerably modified for its second voyage that carried Charles Darwin who became famous for his theories relating to evolution.

Based on her reported 10 guns, the Rapid would have been fitted as a War vessel, not for for survey.

1840: The schooner Glide, out six days bound from Mobile, was lost on Abaco Shoal in the Bahamas during the night of April 12, 1840. The captain and crew were saved.

1854: The Nassau papers of April 12, 1853 stated that “within the last fortnight, it is estimated, that about $400,000 worth of wrecked property has been lost on our shores owing to the weather.” (Note by ELS: If figured based solely on the relative values of gold, then and now, this loss would be over $32,000,000. This is not to say that gold was lost, just that the values would have been equal to this amount.)

1942: Shortly after 10:00 on the morning of April 11, 1942, the German submarine U-154, commanded by Walther Kölle, spotted the American freighter Delvalle, Captain Edgar F. Jones, south of Haiti and maneuvered to attack. Before the sub could get in position, she was spotted by a plane, which radioed the steamer. The Delvalle, making her maximum speed of 13 knots, tried to escape by making a bee line run for safety. Just after midnight, the German sub fired two torpedoes from periscope depth but missed as Captain Jones turned his ship towards U-154 in an attempt to ram her after spotting her periscope less than a quarter of a mile away. The sub’s commander quickly fired both stern torpedoes, but again without success.

Just before 7:00 on the morning of April 12, 1942, the steamer Delvalle, which carried 5,165 tons of general cargo and was bound from New Orleans to St. Thomas and Buenos Aires, was hit by two torpedoes on her starboard side They struck just forward of amidships and about 15’ below her waterline. The explosions caused extensive damage and destroyed her starboard lifeboats. Launching of the other two boats proved difficult because the severe list caused by her rapid sinking. Nine minutes after the first strike, the Germans fired into the crippled steamer and she sank within 15 minutes. Her location was reported as latitude 16°51’ north, longitude 72°25’ west (German Grid EC 2586).

Delvalle’s crew, consisting of 9 officers, 45 men, 5 passengers and 4 armed-guards (the ship was armed with one 4-inch and two .30 cal guns), all got off without loss, except for the ship’s doctor and an able seaman who went down with the ship. The survivors stayed together until daylight, when the launch headed to Haiti for help, landing at Jacmal. The remaining survivors were picked up by the Royal Canadian navy, merchant cruiser, Prince Henry.

The screw steamer Delvalle (ex-Clavarack) had a steel hull, 5,032 gross tons, 3,127 net tons, 390.0’ in length, 54.2’ in breadth, and 28.0’ in depth. She was built by the American International Corporation at Hog Island, Pennsylvania, in 1919, for the passenger service. She was American Bureau of Shipping rated and carried a crew of 47 (not counting her master). She was fitted for burning oil and was 2,500 horsepower. She was owned by the Mississippi Shipping Co. of Louisiana, whose address was 320 Magazine Street, New Orleans, Louisiana. Her home port was New Orleans. Her official numbers were 219184. She had a radio transmitter and her signal letters were KOLL.

NOTE: This is by no means meant to be a complete list of the vessels lost on April 12, as there have been thousands of ships lost for every day of the year. All of the above entries have been edited (shortened) and come from various editions of Spence’s List™. The original lists usually give additional data and sources. Those lists are being updated and are or will be made available for a fee elsewhere on this site.