A British floating battery, a French warship, and pirates vessels all went down on an April 11. If you are seeing this in a post, other than on Shipwrecks.com, read more about these wrecks and other ships lost on an April 11 at http://shipwrecks.com/shipwrecks-of-april-11/.

1794: The floating battery, HMS Proselyte, commanded by Walter Serocold, was destroyed by fire from the French batteries (guns) at Bastia, Corsica, on April 11, 1794. Ancestry.com lists Walter Serocold as dying in 1794 at Calvi, Corsica, so it appears he did not survive the battle.

(Note: This wreck should not be confused with the 32-gun Royal Navy fifth-rate frigate HMS Proselyte, which was wrecked on September 4, 1801, while on her way from St. Kitts to St. Martin when she struck the “Man of War Shoal.” The 1801 Proselyte is now a popular dive site.)

1796: The French ship Ça Ira, 80 guns, Captain Pater, was destroyed on April 11, 1796, when she caught fire and was blown up in St. Fiorenzo Bay, Corsica. Boats from other ships tried to help, but as the fire became out of control, Ça Ira was evacuated and towed away from the anchorage. She drifted and ran aground half a mile to the northward of the fortress and burnt to her water line. An official inquiry afterwards concluded that the fire had been accidentally started by a “bottle of combustible matter improperly kept in the carpenters cabin,” and acquitted her officers from blame. The ship was built as the Couronne at Brest, having been started in May 1781 and launched in August that year. Its likely that she was built from the salvaged remains of her predecessor, also named Couronne, which had been accidentally burnt at the dockyard in April 1781. She had a refit at Toulon in 1784, and was named Ça Ira in 1792.

Her name “Ça Ira” comes from the French words for “it’ll be fine” and were the signature words in the title and refrain of a song that was virtually the anthem of the French Revolution. Of course, the outcome of this particular battle was not fine. 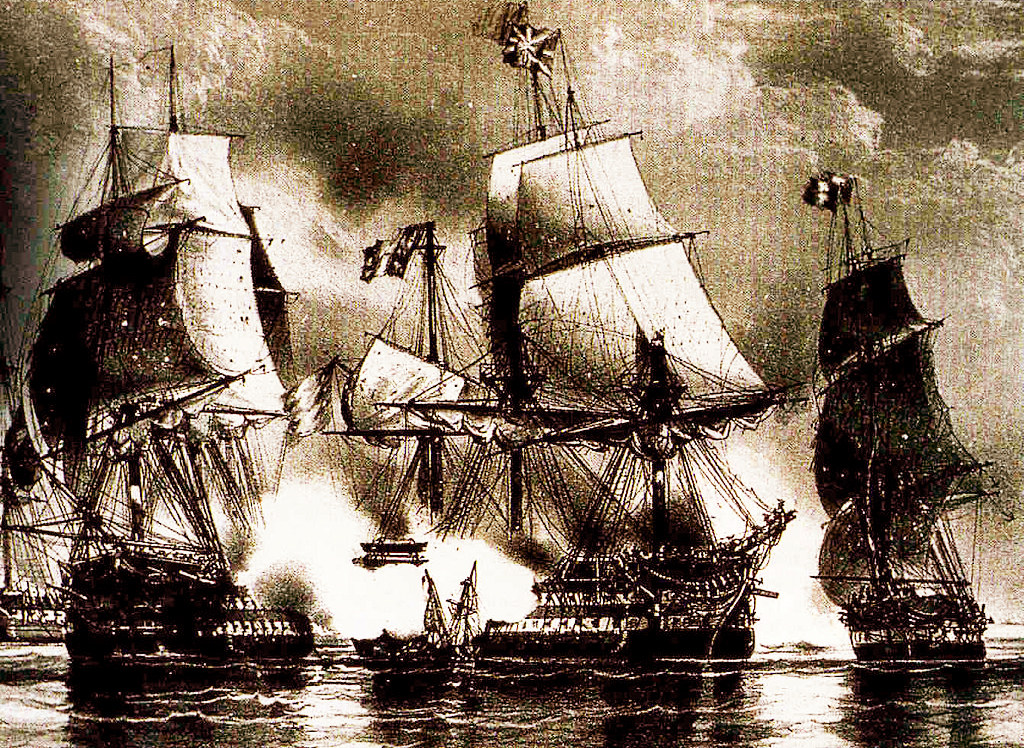 In 1989, just a year after researchers came across a 19th century map in the Bibliothèque Nationale (French National Library) showing its location, the wreck was discovered, allowing for its subsequent excavation. An underwater archaeological survey was undertaken, between 1990 to 1995, by the French non-profit organization, Tech Sub. 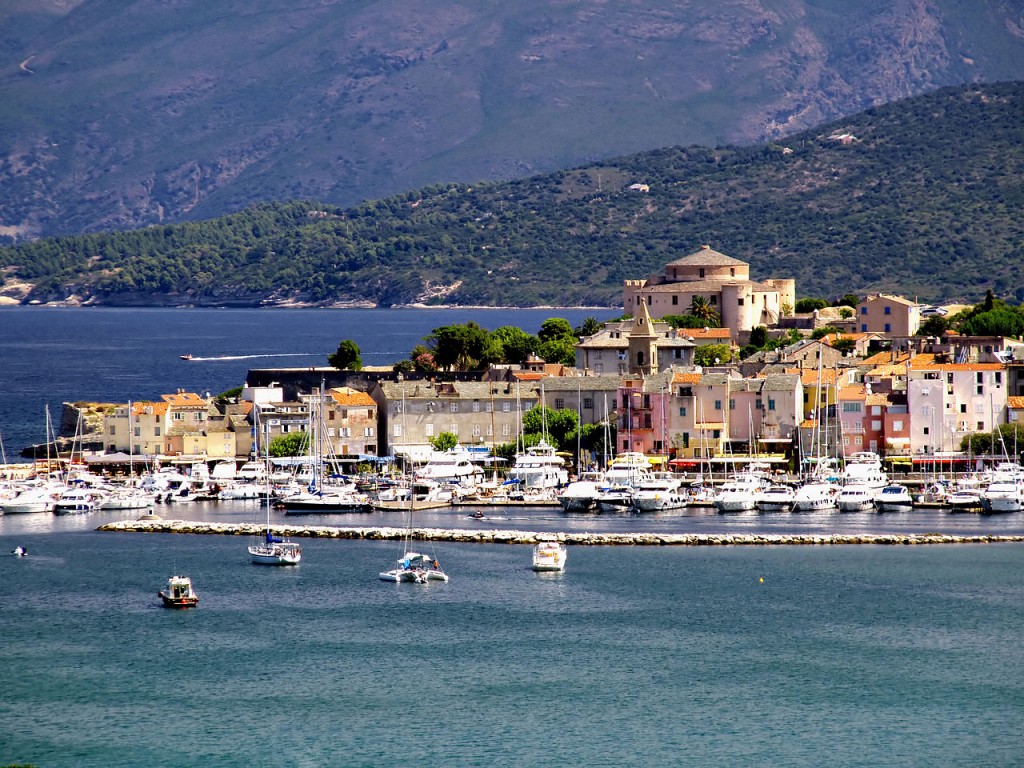 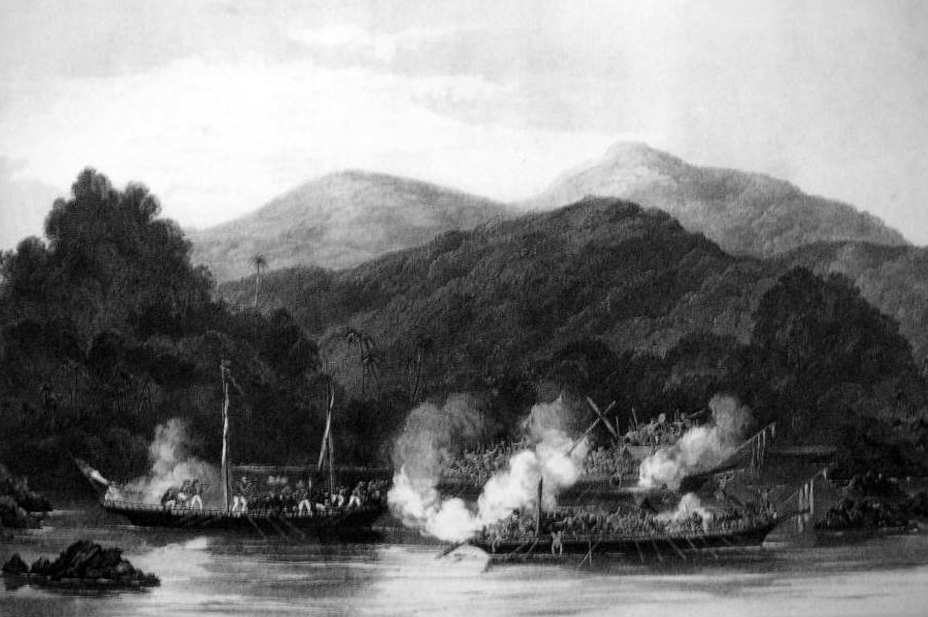 1843 battle between two pirate proas and the proa Jolly Roger,
manned by the crew of HMS Dido, on the coast of Borneo.

A proa is a vessel consisting of two (usually) unequal length parallel hulls. It is sailed so that one hull is kept to windward, and the other to leeward, so that it needs to “shunt” to reverse direction when tacking. Fighting proas could be up to a hundred feet in length. 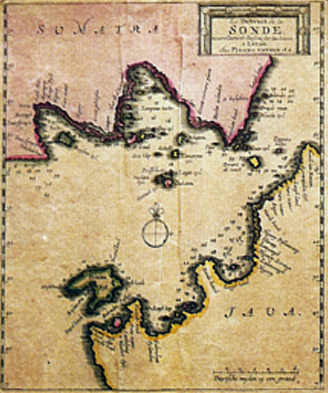 The Sundra Strait (also spelled Sunda or Sonde) is the shallow, narrow strait between the Indonesian islands of Java and Sumatra. It connects the Java Sea to the Indian Ocean. It is very deep at its western end but as it narrows to the east it becomes much shallower, with a depth of only 65 feet in parts of the eastern end. This makes it notoriously difficult to navigate, with constantly shifting sandbanks, and very strong tidal flows. It has been an important shipping route for over a thousand years, especially during the seventeenth and eighteenth centuries when the Dutch East India Company used it as the gateway to the Spice Islands of Indonesia. It is undoubtedly loaded with thousands of still undiscovered shipwrecks, many with valuable cargos.

1818: The Niger, which arrived at Plymouth six weeks from Jamaica saw a vessel “on shore on the Caicos Reef,” with a signal of distress flying, on April 11, 1818. She had yellow sides, figurehead, and quarter galleries.

NOTE: This is by no means meant to be a complete list of the vessels lost on April 11, as there have been thousands of ships lost for every day of the year. All of the above entries have been edited (shortened) and come from various editions of Spence’s List™. The original lists usually give additional data and sources. Those lists are being updated and are or will be made available for a fee elsewhere on this site.