In Today’s Shipwrecks™ list for April 10, there is a ship that held out against an overwhelming enemy until it was scuttled by its own men to prevent capture, another was wrecked with a cargo of rum, a freighter that was torpedoed, and one lost in a “Perfect Storm.” If you are seeing this in a post, other than on Shipwrecks.com, read more about these and other ships lost on an April 10 at http://shipwrecks.com/shipwrecks-of-april-10/.

1818: The ship Pomona, Captain M’Naught, bound from Jamaica to Glascow, was “lost on the Carcos Bank” (Caicos Bank), April 10, 1818. The vessel was totally lost, but the crew was saved as was 120 puncheons of rum, some sails, etc. and carried to Turks Island.” Another report said she was “cast away on “French Key, near the Western Caicos.”

1863: “The Haidee, from Swansea for Nassau, was wrecked near Salt Key on 10th April,” 1863. At least one researcher shows the Haidee, as English, with a cargo of coal, and gives the location of her loss as Hog Island. It is possible that this wreck is being confused the ship Hardee, bound from Cardiff to Nassau “with coal for the rebels, (which) ran ashore on Porkfish rocks, about two miles from Nassau,” on April 27, 1863, and was a total loss. Note: Hog Island is now called Paradise Island. It is located just off the shore of the city of Nassau, which is itself located on the northern edge of the island of New Providence, Bahamas. Salt Key can refer to an island in the Turks & Caicos or an island on Cay Sal Bank, Bahamas. I strongly suspect there are two different wrecks, which simply had similar names and were lost about the same time.

1891: The three-masted schooner Marion Manson, Captain M.G. Dow, bound from Savannah to Cuba, was shipwrecked at Little Inagua on April 10, 1891. She was built and owned by E.S. Crosby in July of 1889 at Bath, Maine, which was also her homeport. She was constructed of oak and yellow pine with iron and copper fastenings. She was salted and decked in September of 1890. She was 501 tons, had a single deck and measured 163.6 feet in length, 35.7 feet in breadth, and 11.5 feet in depth of hold. She was classed A-1 for 15 years in July of 1889, and was surveyed at New York in September of 1890. Her official number was 92,108 and her signal letters were KGLH. 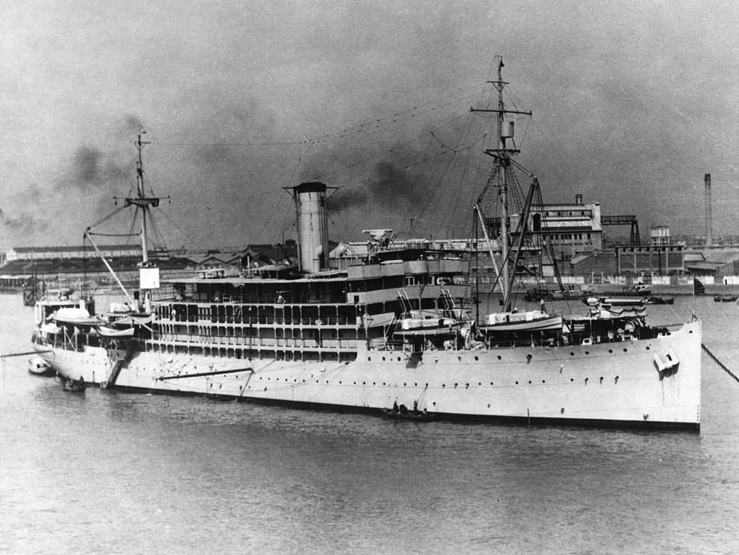 USS Canopus (AS-9) off Shanghai, China, prior to World War II.

She was launched in 1919 by New York Shipbuilding Company, Camden, New Jersey, as the passenger liner SS Santa Leonora for W. R. Grace and Company, but taken over by the Navy upon completion in July 1919 and placed in commission at that time as USS Santa Leonora. She was briefly employed as a trans-Atlantic troop transport before being decommissioned and transferred to the U.S. Army in September 1919. The ship was converted to a submarine tender, and commissioned at Boston on January 24, 1922, Commander A. S. Wadsworth in command.

Just before New Year, 1942, the last of the submarines left Canopus, but she never quit as she cared for small craft and equipment of the Army and Navy, sent her men into battle in the improvised naval battalion which fought on Bataan, and converted her own launches into miniature gunboats dubbed Mickey Mouse Battleships, which attacked the Japanese moving south near the shore. But the overwhelming Japanese strength could not be held off forever, and upon the surrender of Bataan on the night of 8–9 April 1942, Canopus was ordered scuttled in Mariveles Bay, Bataan, to deny her use to the enemy. On 9 April, she was backed off into deep water under her own power and the veteran whom the Japanese could not sink ended a lifetime of service to the Navy when she was laid to rest by her own men.221 of USS Canopus crewmen were evacuated to Corregidor on February 28, 1942, and served with the Marines 1st, 2nd, and 3rd Battalions on beach defenses. The final 327 crewmen were also evacuated to Corregidor and served in the 4th Marine Regiment’s 4th Battalion Reserves, which fought gallantly during the final battle for the island fortress. Nearly all Canopus crewmen were captured at the fall of Corregidor and spent the rest of the war in Japanese POW Camps in the Philippines and the Asian mainland. Some of the captured crew did not survive, but were killed on 14 December 1944 in the Palawan massacre. A total of 212 of her crew were eventually listed as killed/missing in Action. 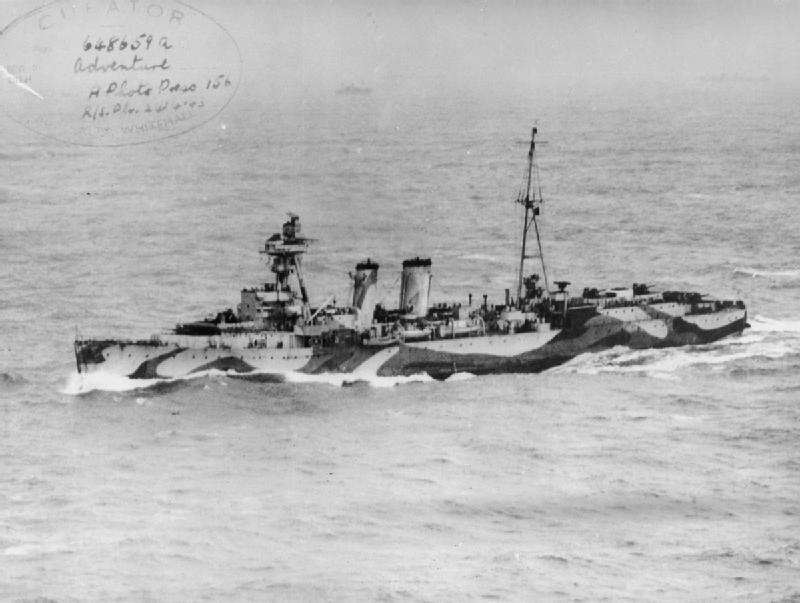 HMS Adventure in February 1943, two months before sinking the Irene

1944: During her tenth patrol, the Type IXC German submarine U-68 was sunk in the Atlantic Ocean (latitude 33°24′ North, longitude 18°59′ West) northwest of Madeira by Grumman TBF Avenger and Grumman F4F Wildcat aircraft based on the escort carrier USS Guadalcanal. All but one of her crew of 57 were lost. 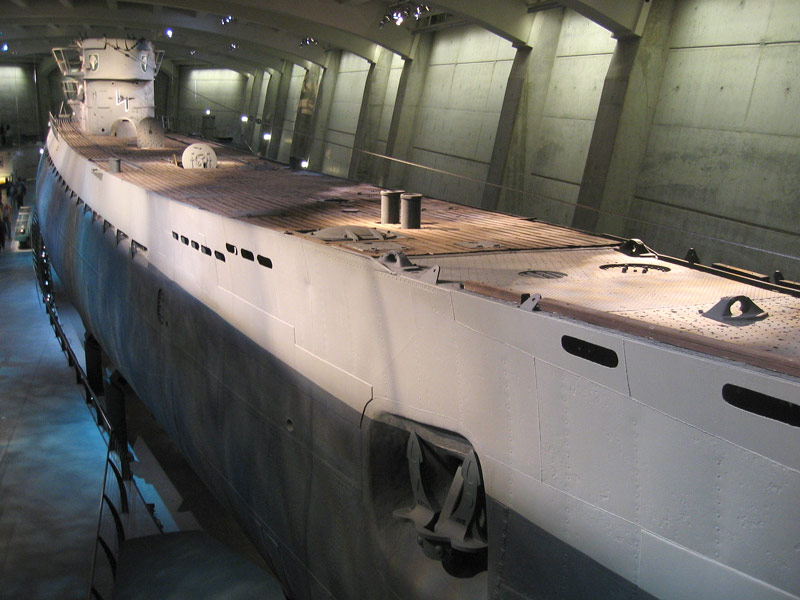 German submarine U-68 was a Type IXC U-boat of Nazi Germany’s Kriegsmarine during World War II. The submarine was laid down on April 20, 1940, at the DeSchiMAG AG Weser yard at Bremen as yard number 987, launched on October 22, 1940, and commissioned on January 1, 1941, under the command of Korvettenkapitän Karl-Friedrich Merten as part of 2nd U-boat Flotilla.

U-68 conducted ten combat patrols, sinking 32 merchant ships, for a total of 197,453 gross register tons; she also sank one auxiliary warship of 545 GRT. She was a member of one wolfpack.

1968: We have all heard of the term “perfect storm,” meaning two storm fronts combing to cause unusually horrendous weather. That is exactly what happened in New Zealand on April 10, 1968, when Cyclone Giselle crashed into another storm, which had come up from Antarctica. The storms collided as the ferry Wahine, with 723 passengers and crew, was making its usual course across Cook Strait. Of course there had been warnings, but the crossing is frequently rough and her captain hadn’t foreseen the combined storms’ intensity. He had simply expected an uncomfortable voyage, but certainly nothing worse than previous storms his ship had weathered with ease.  The winds rapidly increased to almost 100 miles per hour. After fighting it without success and attempting to run for open water, the ship was thrown on Barretts Reef. The engines ceased working. Captain Robertson ordered the anchors dropped and all watertight doors shut. He still thought she would survive the pounding she was taking. With flooding in four compartments and the vehicle deck, the passengers were told to put on their life-jackets and report to their life-stations. As the winds and waves grew, she dragged her anchors. It was too dangerous to expect help from others. The big ferry drifted down the harbor until she was off Steeple Rock near Seatoun, Wellington, New Zealand. Despite the obvious dangers, a tug and pilot boat came to their aid. The passengers who evidently had not understood the dangers, were taken by surprise when the captain’s orders finally came to abandon ship. Because of the ship’s list, the port lifeboats couldn’t be launched, and one of the four starboard boats immediately filled, spilling and drowning most of the people. A few managed to cling to it as it drifted across the harbor. Other boats were swamped too, but most of the people managed to make it to the nearby shore or to rafts, or to rescue boats. In all, 51 people died. Although an inquiry found that errors of judgment had been made, they agreed that abandoning ship either earlier or later would have resulted in even more deaths. The ship broke up before she could be salvaged and a plaque now marks the tragedy at Seatoun. 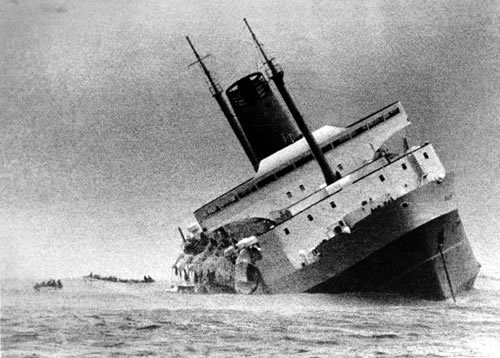 To learn more about this disaster see NZ On Screen: NZBC Classics – Wahine Disaster, and see Wahine Disaster from the Ministry for Culture and Heritage. See also BBC’s story on the Wahine: On This Day.

NOTE: This is by no means meant to be a complete list of the vessels lost on April 10, as there have been thousands of ships lost for every day of the year. All of the above entries have been edited (shortened) and come from various editions of Spence’s List™. The original lists usually give additional data and sources. Those lists are being updated and are or will be made available for a fee elsewhere on this site.